This article offers an introduction to the challenges, opportunities and advantages associated with Software Defined Radio (SDR), particularly within the field of satellite communication (satcom), and more specifically in relation to Inmarsat’s currently most advanced IP-service, the Broadband Global Area Network (BGAN). SDR is no longer a vision but is an opportunity readily at hand for manufacturers of military terminals and radios, software developers and SATCOM service providers. 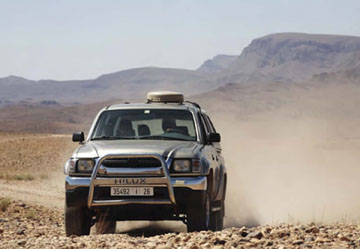 Software Defined Radio (SDR) as a term has been around for a long time. SDR has been the vision of a single wireless multi-purpose device that could seamlessly integrate multiple communication channels, including satellite communication (SATCOM).

This is no longer a vision!
Driven mainly by the military market and DoD/MoD’s need for interoperability, flexibility in choice of communication means, reduced total cost of ownership as well as rapid functionality upgrades and repair, the SDR technology has experienced great advances and focus during the last decade.

With the increasing globalization on the military scene, i.e., participation of various countries in international conflict resolution and peace keeping missions, the need for communication and interoperability in remote areas of the globe has increased significantly.

SATCOM is an attractive option when the communication distance increases and direct radio links become unavailable at the scene of an operation. SATCOM is used heavily by military entities and governments and operational needs can no longer be fulfilled by the military SATCOM (MILSATCOM) solutions only. In fact, 80 percent of all U.S. government and military traffic in 2008 was already carried over commercial satellites. 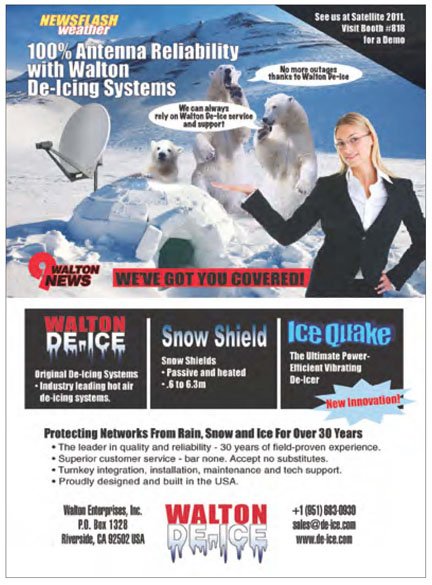 Inmarsat BGAN is the leading global commercial broadband mobile SATCOM service available. Inmarsat is a well-established satellite communications provider and BGAN is easy to set-up and use and has already been proven in military field operations. Moreover, BGAN is currently an attractive option for achieving commercial SDR-based SATCOM.


This combination of BGAN SATCOM and SDR is enabled by GateHouse and is the company’s most recent technological development. Currently, militaries operate with dedicated hardware/software for each communication mean, e.g., one radio/terminal for SATCOM and one for VHF, UHF etc.

This is very space demanding and sets a limit as to the number of communication means the soldiers in the field can use. With an SDR platform, the number of communication means is only limited by the channels available on the terminal, as well as the requirements of the individual mission. This operational benefit is complemented by the cost benefits mentioned above.

SDR provides benefits for the end-users as well as for manufacturers of military radios/terminals. SDR provides each manufacturer with the opportunity of customizing their offering to changing customer demands with limited extra costs and extended time to market. With this technology, the manufacturers can produce the terminal hardware and then wait before equipping it with software waveforms until customer requirements are defined. This saves the manufacturer significant development and waveform porting costs. In other words, the manufacturers are empowered to deliver greater customer value at lower cost. 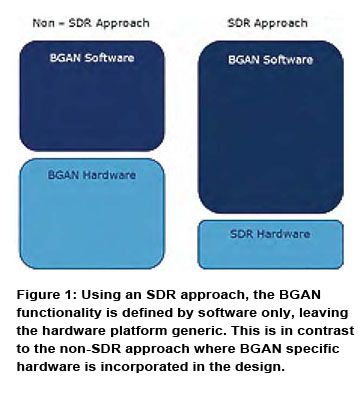 BGAN At A Glance
Inmarsat is a recognized pioneer and market leader in the field of global Mobile Satellite Services (MSS), and the IP-based BGAN (short for Broadband Global Area Network) service is the most advanced of Inmarsat’s current offerings. The system offers standard and streaming IP data services, as well as a voice and text service (source Inmarsat): 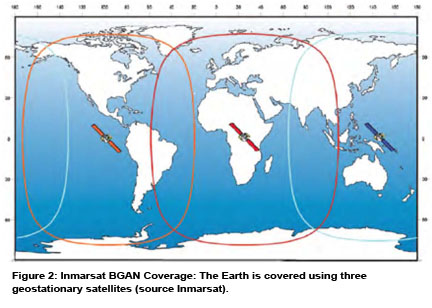 The service is provided globally via three satellites placed in geostationary Earth orbit.

System specifications provide for terminals operating from ground vehicles, ships and airplanes. While the Inmarsat BGAN system is a commercial system, it has been adopted by military forces for Beyond-Line-Of-Sight (BLOS) communication, primarily because it is easy to set up
and use and provides an on-demand 492 kbps data service on the surface of the Earth with exception of the Polar Regions.

The government sector is a major revenue generator for Inmarsat. The airtime is generated from an installed terminal base provided by manufacturers of commercial equipment for government aircrafts, ground vehicles, and ships. The shift to SDR based terminals is expected to enable BGAN on tactical radios, as it provides an opportunity for an instant BLOS capability, at limited extra cost.

SDR Technology
Over the past 30 years, radios have changed from purely hardware-based devices to containing more and more software. The term Software Defined Radio is used for a radio where the essential functions are implemented in software and which, as a consequence, can be reconfigured for different communication standards.

The term Waveform refers to the software loaded during the startup of the modem, which performs the communication functions. The development of SDR technology has been encouraged by the rapid development over recent years in integrated circuits, where size and power consumption have decreased and performance and flexibility have increased. Such enables very high performance generic platforms.

The U.S. DoD has invested in SDR through the Joint Tactical Radio System (JTRS) program. The JTRS program has produced a number of SDR radios and waveforms. It has also produced the SCA standard (short for Software Communication Architecture) which specifies how radio platform and waveforms must be designed and implemented to ensure interoperability, and in particular, that an SCA compliant waveform can run on different radio platforms as long as they are SCA compliant.

Solutions
The GateHouse BGAN waveform contains all the common functionality required to build a BGAN terminal with on-demand BLOS communication capability. The BGAN Waveform is developed for SDRs and is compliant with the SCA specification version 2.2.2, giving the waveform the ability to run on generic SDR hardware that are conformant to the SCA specification (the waveform can also run on non-SCA compliant hardware).

The BGAN waveform can run as the only waveform on the radio, or run as one of several waveforms on a multimode radio. Due to the SCA specification, the effort to port the waveform from one radio to another is considerably less than for a conventional radio design where the software typically interfaces custom designed hardware.

The traditional approach has been to develop inflexible purpose-specific hardware to implement a BGAN terminal, whereas by using the SDR approach, the complete functionality (waveform) is implemented in software. This leaves the underlying hardware generic and fit for other purposes, as well (see Figure 1).

In addition to the advantage of reusing radio platforms and allowing for coexistence of waveforms on a single radio, the SDR approach also allows for easy upgrades of the BGAN terminals as the BGAN standard evolves (e.g., support of higher data rates). The GateHouse BGAN waveform is structured internally according to the Inmarsat BGAN specifications and contains multiple layers of functionality as shown in Figure 3.

In a typical customer engagement process, the customer provides an SDR platform that is either already existing or a new development. In case of new terminal development, GateHouse is involved early on in the terminal design and implementation process to define software/hardware interfaces in cooperation with the customer and to ensure that the radio platform is capable of hosting the BGAN waveform. 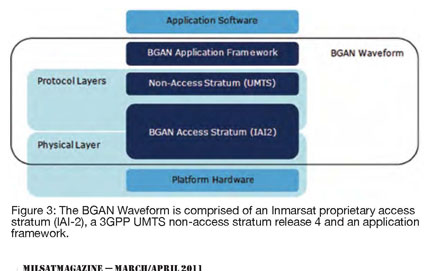 When Gatehouse receives the radio platform, the BGAN waveform is then configured and built for the radio and loaded into the radio. A series of thorough tests is then conducted to ensure that the resulting terminal is compliant with the BGAN specifications. commercial system, it has been adopted by military forces for Beyond-Line-Of-Sight (BLOS) communication, primarily because it is easy to set up and use and provides an on-demand 492 kbps data service on the surface of the Earth with exception of the Polar Regions.

GateHouse offers a single point of contact and access to a rock-solid, field-proven IPR platform based on more than 100 man-years of accumulated expertise from more than 10 completed BGAN terminal development programs across many different hardware platform — for aeronautical, maritime and land mobile usage. There’s also reduced development time (and, therefore, cost), as well. Offering an attractive alternative to in-house development, the Company will bring BGAN terminal projects through to Inmarsat Final Type Approval faster, with considerably fewer risks, and at a competitive and flexible pricing model.

GateHouse can be contracted to take charge of the entire BGAN implementation process based on a customer supplied hardware platform up to, and including, the mandatory approval testing. 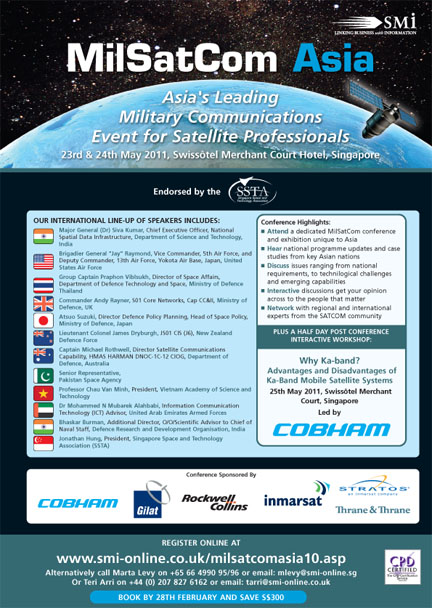