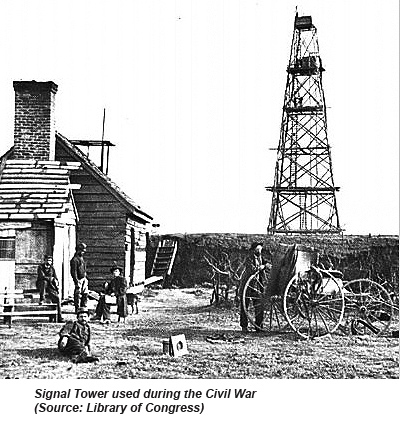 In today’s world, having superior satellite communications seamlessly tied to the Internet is vital to sustaining a military force and winning on the modern battlefield. The U.S. military relies heavily on this technology to gain a decisive advantage over our enemies. By bringing “broadband to the battlefield,” our soldiers now have better situational awareness about their friends and foes than ever in the history of warfare.

Our military’s most recent engagements, especially in South West Asia, have drastically changed the face of traditional communications requirements. The need for rapid dissemination of real-time intelligence and other vital content has transformed the military’s communications requirements. Our forces rely on having access to high-speed secure voice, video, and data, anytime and anywhere. Our military leaders understand that data and the effective use of it, is a weapons system unto itself, especially in the highly mobile nature of today’s conflicts.

Today’s warfighters depend on space-based technologies to provide command and control communications, to employ high-tech sensors and data-intensive weapon systems, and to supply instant access to a vast array of real-time information. This capability puts crucial data at the fingertips of the soldier at critical times and in critical locations.

Soldiers today have instant access to live video images from UAVs and other intelligence sources. They can chat with bomb disposal experts on the other side of the world or seek medical advice to treat the wounded from medical experts anywhere around the globe. They are able to submit instant inquiries from biometric data collected in the field to help identify terrorists on the spot, and of course, they now enjoy better command and control when deployed in very remote parts of the battlefield. In fact, deployable satellite communications are even aiding in the health, morale, and welfare of soldiers by providing CNN feeds, VoIP calls home, email and other social networking sites. 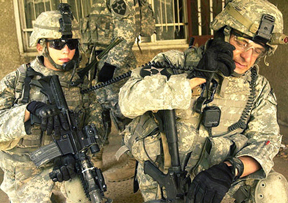 Among TCS’ most recent offerings, which are widely deployed with warfighters, are the SIPR/NIPR Access Point (SNAP) and Wireless Point to Point Link (WPPL) systems. SNAP VSAT systems provide Beyond-Line-of-Sight (BLOS) transportation of all types of IP data, both secure and non-secure, to include Voice over IP (VOIP), data and video to remote, austere camps with little to no organic support capabilities. SNAP systems provide secure and non-secure Internet Protocol access via either a 1.2-m small VSAT system or a 2.0-m medium VSAT system. The 1.2-m SNAP VSATs provide Ku- connectivity, field upgradeable to Ka-band. The 2.0-m SNAP VSAT is a Ku- system, field upgradeable to both Ka- and X-band.

Additional short-distance BLOS capabilities are available via the SwiftLink Tactical Transportable Tropo (3T). Providing long-haul, high-capacity, and low-latency technology economically, the 3T is a small, lightweight Troposcatter system that can eliminate the need for high-cost, recurring satellite bandwidth in terrain-challenged environments. The “operator-friendly” modem utilizes dynamic bandwidth allocation, minimizing the need for configuration which results in a reduced need for training and troubleshooting in the field.

SNAP VSAT terminals consist of an RF VSAT satellite access sub-system and a baseband sub-system. The RF sub-system consists of an RF equipment case and an Uninterrupted Power Supply (UPS) case. Users have the option of using one of four baseband systems: rack-mounted, embedded, Stryper, or micro. All of the RF VSAT sub-systems can be matched with any of the baseband sub-systems to form a complete SNAP system. There are four different modem options, including iDirect, ViaSat’s Linkway S2, Network-Centric Waveform, and the DISA JIPM modem. 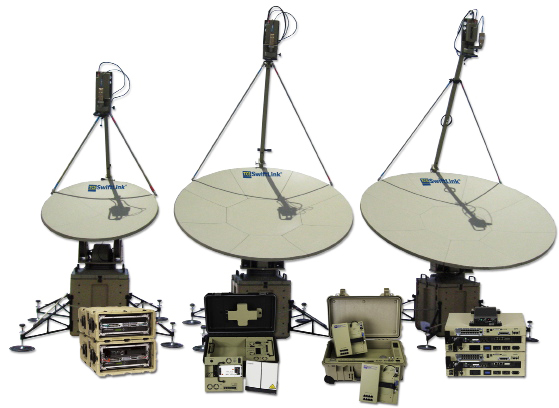 The SwiftLink WPPL system enables warfighters to close the gap on the “last digital mile,” pushing data services to the network edge using a low-cost alternative to expensive BLOS satellite communications. It enables secure, long-range LAN communications between a hub and deployed personnel.

SwiftLink solutions, especially the small baseband and executive kits, have been used by non-conventional forces for more than ten years because of the variety of small form factors available. Examples of this include TCS’ Single User Executive Travel Kit and the SDN-Lite 2300, a secure data network kit that can serve a small team. One of the benefits of these kits is that they are designed to be small enough that they can pass through airport security screening with low-visibility, be carried on a commercial airliner, and then easily stored in an overhead compartment.

In some cases, it is common for customers to deploy a single individual or a very small advance party on a moment’s notice with a lone user kit that either uses a BGAN or MicroVSAT Terminal (sub-1-m) system, so they have their own secure reach-back when they hit the ground. As the size of these teams grow, they can use one of the medium SwiftLink kits capable of handling a 15 to 20 man operation. Furthermore, as that team grows to include even more users, they can use larger, more robust SwiftLink systems which ultimately are integrated seamlessly into larger theater communications networks.

Most recently, TCS unveiled the SwiftLink Inclined Orbit Tracking Terminal, which tracks inclined satellites as they move away from the boresight of standard antennas and provides capability for tracking the drift, resulting in accessible bandwidth at inexpensive price points. This military-grade, ruggedized solution is ideal for use in harsh, mountainous environments where the absence of bandwidth availability is of critical concern.

The Terminal is the first of its kind and is the latest addition to the SwiftLink VSAT family. The end-to-end solution is completely interoperable with existing SNAP systems and can be retrofitted in the field.

SwiftLink solutions are also in wide use by mainstream combat forces such as deployed Brigade Combat Teams (BCTs) and are a mainstay of their daily communications missions. SwiftLink supports today’s common operational scenarios and deployments that reinforce remote Forward Operating Bases (FOBs) and Combat Outposts (COPs) where the only transportation in and out is by air.

This is especially the case in Afghanistan where SwiftLink solutions are perfectly suited for use due to their compact size fitting easily into a helicopter storage bay. Often the SwiftLink Flyaway VSAT terminals provide the only secure communications path to higher headquarters for command and control. Currently, a remote mountain top unit relies on SwiftLink solutions to receive situation reports, mission orders, intelligence briefings and data, and other applications such as the current local weather.

With Internet connectivity, these units have the same access to enterprise applications that exists back at home base, such as Army Knowledge Online (AKO) and the DoD Personnel System. Using IP-based connectivity via secure satellite communications provides units at the tip of the spear the same administrative functions that standard terrestrial networks provide back in the garrison.

In the field, SwiftLink solutions are ideal for providing communications in a hostile and highly mobile environment. SwiftLink systems can be set up in a matter of minutes and require very little training to operate. SwiftLink solutions have been used for several years now by Military Transition Teams (MiTT) to train Iraqi and Afghanistan military and police forces throughout the vast region of these two countries. 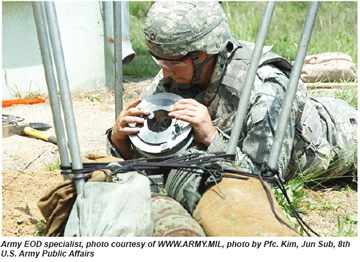 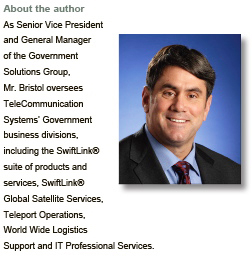 These systems are ideal for this kind of mission as they are packed in a few transit cases that can be easily transported by vehicles and helicopters and operated without the need for specialized skills/Military Occupational Specialties (MOS). Another use of these systems is real-time video. Explosive Ordinance Disposal (EOD) teams use SwiftLink VSAT terminals to transmit images and to download defeat instructions from the analysts who remain in communication with the operational teams. Other security forces use SwiftLink systems to access criminal and terrorist databases, exchanging biometric data instantaneously. This is truly using data as a weapon system.

It is no secret that superior communications and instant access to data is a force multiplier. The U.S. military has recognized this fact and has made huge investments in infrastructure and equipment to capitalize on this revolutionary capability. Jumps in satellite technologies, the Internet, and advancements in ground equipment like SwiftLink, have transformed the way our military goes to war. Giving the warfighter the right technology to obtain critical intelligence on friendly forces and the enemy, in real-time, anytime and anywhere, is making all the difference in the world.