The blackness of space is deceptive. It looks empty. It’s not.

At the Earth’s ionosphere, about 60 to 1,000 kilometers altitude, the sun’s ultraviolet radiation ionizes the gasses of the Earth’s atmosphere, knocking off electrons and leaving behind electrically charged positive and negative particles.

That collection of particles is called a plasma, and the Earth is swathed in it. In fact, most of the visible universe is plasma, 99 percent of it, according to NASA. 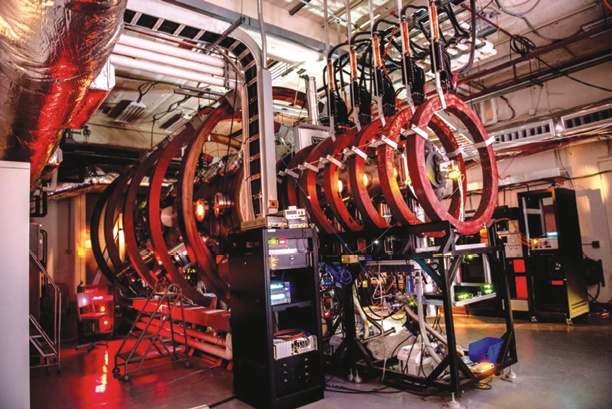 “It’s a dynamic medium,” explained Bill Amatucci, physicist and head of the U.S. Naval Research Laboratory’s (NRL) Charged Particle Physics Branch. “[The concentration of plasma] decreases as you get away from planets, but most of the rest of the universe is in the plasma state. We just happen to live in a cold spot, relatively.”

While naturally-occurring plasmas are rare on the Earth’s surface, man-made plasmas can be found in such everyday things as neon signs and fluorescent lights. They can also be found at NRL’s Plasma Physics Division, where Amatucci and his team of research physicists have been using a massive chamber to create and study them.

A large-scale vacuum vessel for the creation of space-like conditions, the Space Physics Simulation Chamber is one of only a handful of its kind in the United States and one of the biggest in the world.

Now the researchers who operate it are looking for external partners who might want to use it to conduct space plasma experiments or test spacecraft hardware. 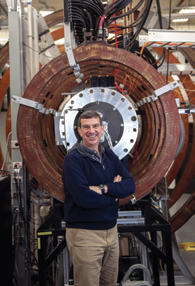 “There are a lot of people [within the Department of Defense] who build experiments to fly in space, and this is a place where you could test them in a realistic environment prior to flight,” Amatucci said.

In the Charged Particle Physics Branch lab, Amatucci’s team designs instruments to take their own measurements, and sometimes they design hardware that will fly in space, as well.

In May of this year, their Space PlasmA Diagnostic suitE (SPADE) experiment launched on a SpaceX Falcon 9 resupply mission for the International Space Station.

The experiment consists of a pair of “plasma impedance probes” designed to monitor the background plasma conditions for space weather measurements and also monitor for hazardous levels of spacecraft charging on the space station, which goes through day-to-night cycles of charging and discharging as it travels through different plasmas.

Now that SPADE is on the space station, everything is going according to plan, Amatucci said. Each day, his team downloads new data from the experiment.

“It’s been fantastic,” Amatucci said. “We’re getting tons of data. More than we can swallow right now. So we’re in the initial stages of doing our deep dives into the data.”

As one of the biggest operators of satellites, the U.S. Navy has a keen interest in understanding the fundamental properties of space plasmas and the applied plasma physics problems that the lab is using the chamber to study.

The smaller section is called the source chamber — researchers use it to create and manipulate the plasmas before sending them into the
main chamber.

During operation, researchers evacuate the chamber of air, fill it with noble gas (often argon, though they use a range of different gasses in their experiments) and then ionize the gas by stripping electrons from the gas atoms. 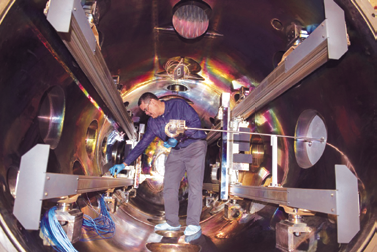 To hold together the plasma inside the chamber, the researchers create a background magnetic field using electromagnet coils that encircle the vacuum chamber.

During their experiments, they can fine-tune this magnetic field to mimic the different conditions in the ionosphere or different regions of the Earth’s magnetosphere.

They’re also using the chamber for diagnostic development and preflight testing of hardware that must withstand the rigors of spaceflight.

Like the space station, a spacecraft passing through plasma will accumulate electrical charges, occasionally resulting in high voltages and electrical discharges that can damage electronics and even disable satellites.

“These charged particles can interact with each other over long distances,” Amatucci said. “So there’s a rich variety of disturbances and waves that can ripple through them. We want to understand the basic behavior of the medium so that we can have reliable and persistent operation of our satellites.”

By mounting hardware, such as probes or miniature satellites, on a 3D-positioning system, the researchers can move the hardware within the full volume of the chamber through different areas of the plasma in precision fashion.