The Passing Of A True American Hero

The Space Foundation has commented on the death of Col. John H. Glenn, Jr., USMC (Ret.), 95, the last of the Mercury Seven astronauts, military test pilots selected by NASA in 1959 to become America's first astronauts.

"US success in space was built on the courage and determination of men like John Glenn, who dedicated his life to serving his country and proving what humans could accomplish in space," said Kevin Cook, Space Foundation, the Vice President of Marketing & Communications.

In 1962, Glenn was the first American to orbit the Earth and the fifth human in space. He was also the oldest person to go into space when, in 1998 at the age of 77, he returned to space as a Payload Specialist on Discovery's STS-95 mission. An Ohio native, Glenn was a US Marine Corps aviator, engineer and United States Senator. He was inducted into the US Astronaut Hall of Fame in 1990. Satnews Publishers adds, Godspeed, and thank you, Astronaut Glenn.
(Photo of John Glenn is courtesy of NASA.)

They were given the green light, the go, the high five.

The US Air Force has approved Lockheed Martin’s Critical Design Review (CDR) for the Contingency Operations (COps) contract that was completed on November 17th. The agreement is designed to upgrade the current GPS satellite ground control system that offers new capabilities in which the GPS III satellites will operate more powerfully and accurately. COps is envisioned as a temporary gap filler prior to the entire GPS constellation’s transition to operations onto the next generation Operational Control System (OCX) Block 1, currently in development.

Once they are launched, the COps modifications will allow the AEP to support the more powerful, next generation GPS Block III satellites, enabling them to perform their positioning, navigation and timing mission.

On October 15, under a separate contract, Lockheed Martin completed the Commercial Off-the-Shelf (COTS) Upgrade #2 (CUP2) project, part of a multi-year plan to refresh the AEP’s technology and enhance the system’s ability to protect data and infrastructure from internal and external cyber threats, as well as improve its overall sustainability and operability. CUP2 is now fully operational and managing the current GPS constellation.

The contract is a firm-fixed-price contract valued at $29.2 million for a Minotaur I launch vehicle.  This was the first such award under the Orbital/Suborbital Program 3 (OSP-3) Lane 1 capability.

The OSP-3 contract Lane 1 capability is for 400-4,000 lbs. (181-1,810 kg) to Low-Earth Orbit (LEO) and long-range, sub-orbital missions. The specific launch date of NROL-111 will be determined by the schedule of the contractor but will be no later than 24 months from the date of contract award. 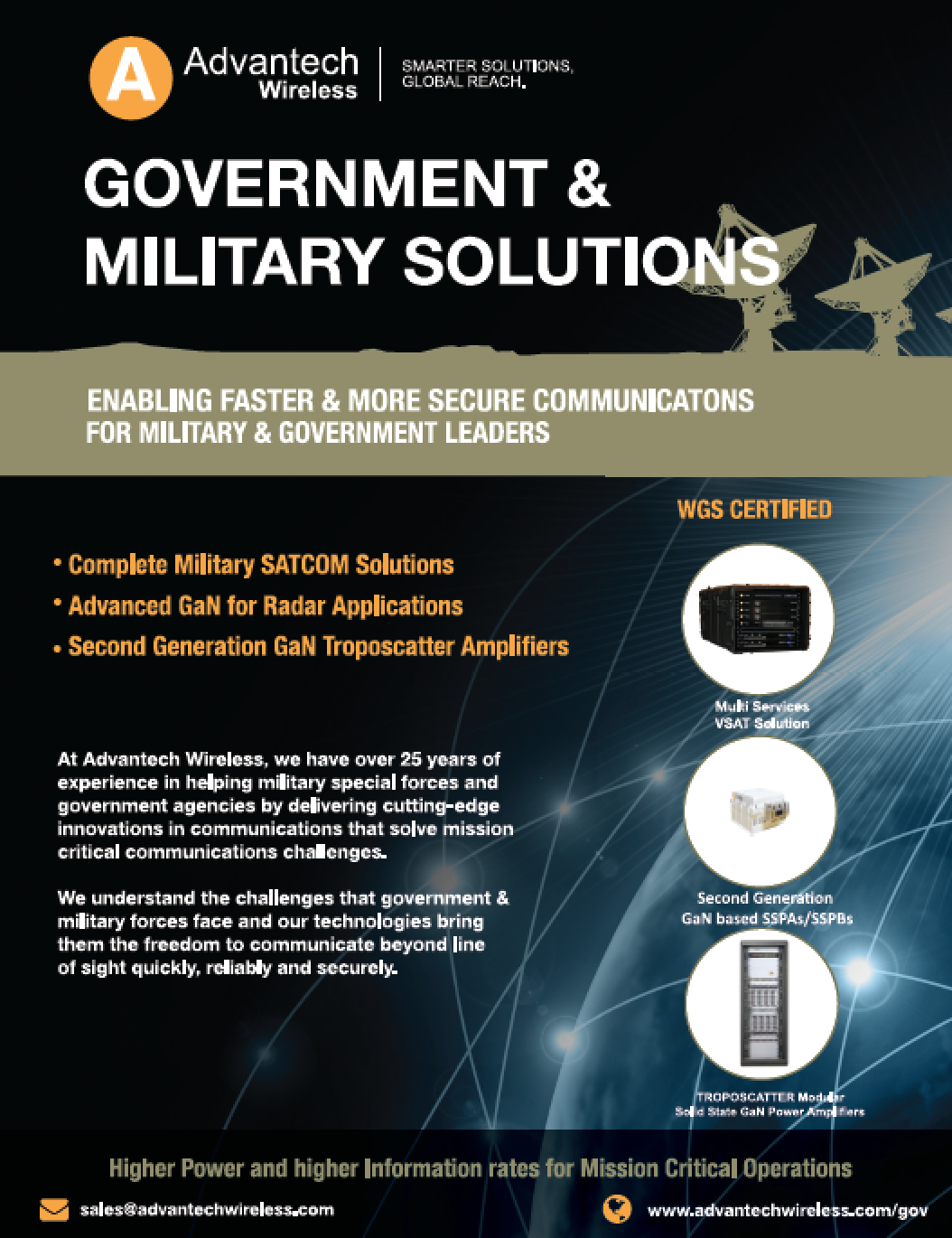 Success can be claimed by United Launch Alliance and the US Air Force as the WGS-8 launch occurred without a hiccup to provide improved and extremely crucial communications for the armed forces.

“Thank you to the US Air Force and industry team whose flawless execution enabled today’s successful launch of the WGS-8 mission,” said Laura Maginnis, ULA vice president of Custom Services. Last week, ULA celebrated our anniversary and 10 years of 100 percent mission success. This evening’s launch epitomizes why our customers continue to entrust ULA to deliver our nation’s most crucial space capabilities.” 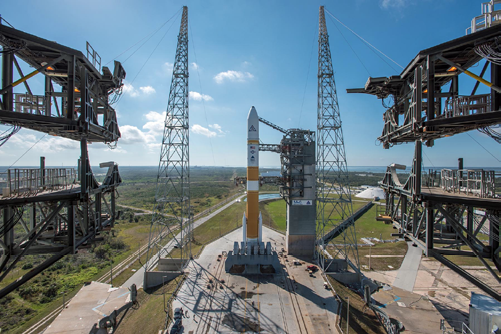 At Cape Canaveral Air Force Station, Florida, on December 7, 2016, the United Launch Alliance (ULA) Delta IV rocket carrying the WGS-8 mission for the US Air Force is readied for launch.

The booster and upper stage engines are both built by Aerojet Rocketdyne. ULA constructed the Delta IV Medium+ (5,4) launch vehicle in Decatur, Alabama. WGS-8 marks the sixth flight in the Medium+ (5,4) configuration; all launches in this configuration were WGS missions.

Depending on the mix of ground terminals, data rates, and modulation and coding schemes employed, a single WGS satellite can support data transmission rates of more than 6 Gbps. 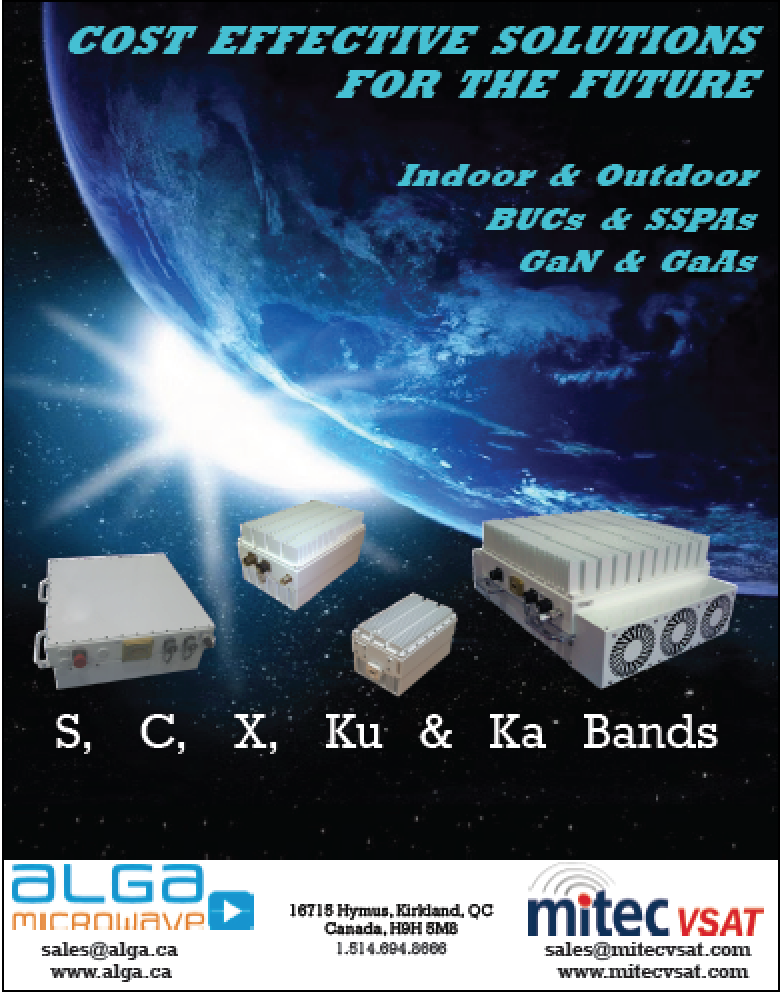 In coordination with the WGS-8 launch, the US Army has modernized the Global SATCOM Configuration and Control Element to a new service-oriented virtualized software system residing on a new ground hardware platform.

Each Global Satellite Configuration and Control Element has the capability to control up to 10 WGS satellites at a time.

Spacecraft platform control and anomaly resolution is accomplished by the 3rd Space Operations Squadron at Schriever Air Force Base in Colorado Springs, Colorado.

The EELV program was established by the US Air Force to provide assured access to space for Department of Defense (DoD) and other government payloads. The commercially developed EELV program supports the full range of government mission requirements, while delivering on schedule and providing significant cost savings over the heritage launch systems.

ULA has successfully delivered more than 110 satellites to orbit that provide critical capabilities for troops in the field, aid meteorologists in tracking severe weather, enable personal device-based GPS navigation and unlock the mysteries of the solar system. 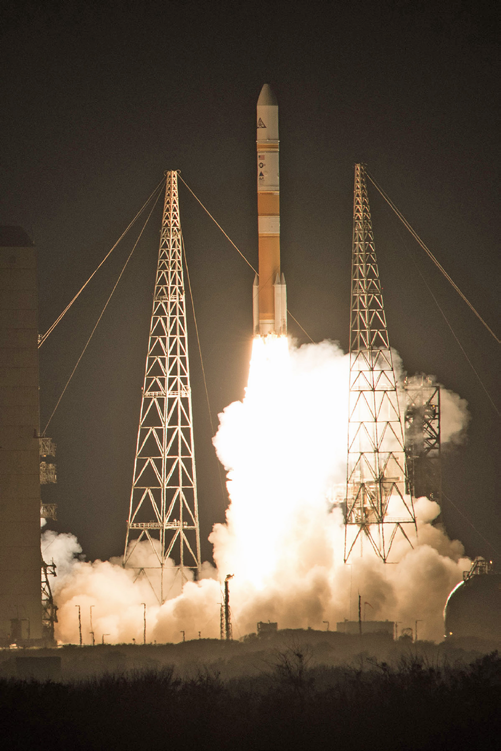 Payload Fairing (PLF)
The PLF is a composite bisector (two-piece shell), 5 meter diameter fairing. The PLF encapsulates the spacecraft to protect it from the launch environment on ascent. The vehicle’s height, with the 47 ft. tall PLF, is approximately 217 ft.

The DCSS cryogenic tanks are insulated with a spray-on insulation and helium-purged insulation blankets. An equipment shelf attached to the aft dome of the DCSS liquid oxygen tank provides the structural mountings for vehicle electronics. 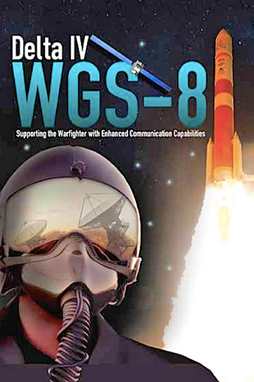 The booster’s cryogenic tanks are insulated with a combination of spray-on and bond-on insulation and helium-purged insulation blankets. The booster is controlled by the DCSS avionics system, which provides guidance, flight control.

The SRMs are 5 ft in diameter and 53 ft long and constructed of a graphite-epoxy composite. The SRMs are connected to the booster by two ball-and-socket joints and structural thrusters.
ulalaunch.com

The Orbital ATK Role From GEMs To Pipes To Tanks

A number of technologies that were provided in support of the United Launch Alliance (ULA) Delta IV rocket launch of the eighth Wideband Global SATCOM (WGS-8) satellite were manufactured by Orbital ATK. 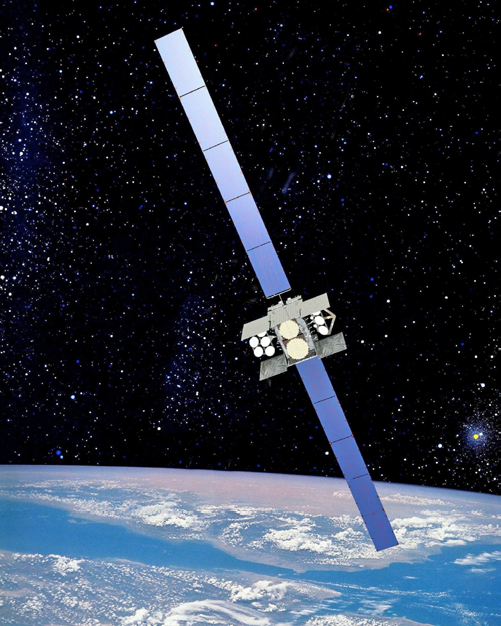 The December 7th launch from Cape Canaveral Air Force Station in Florida noted that both the launch vehicle and the satellite incorporated Orbital ATK technologies.

For the satellite itself, the company produced the loop heat pipes and standard heat pipes, which provide payload, spacecraft bus and battery thermal management which were manufactured at the firm's Beltsville, Maryland, facility. 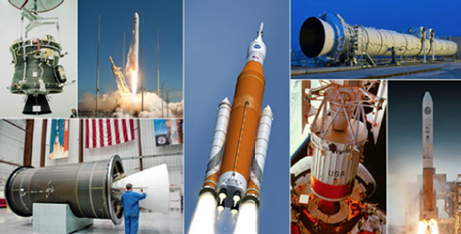 Orbital ATK produced the solid rocket motors at their Magna, Utah, facility, where the company has manufactured 82 GEM-60s in support of the 34 Delta IV launches since their initial flight in 2002. 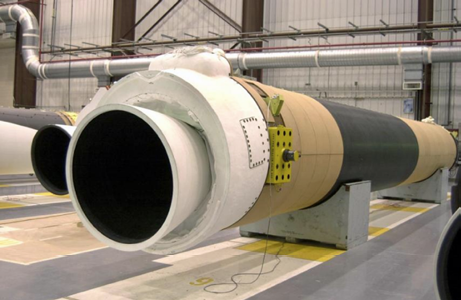 The largest composite structures are four to five meters in diameter, range from one to fourteen meters in length, and are produced using either advanced wet winding or hand layup, machining and inspection techniques at Orbital ATK’s manufacturing facilities in Iuka, Mississippi, and Clearfield, Utah.

Orbital ATK also designed and produced the nozzle's thermal protection material, which is capable of shielding the nozzle from the extreme heat of launch, when external temperatures can exceed 4,000 degrees Fahrenheit.

The WGS-8 satellite is part of a larger system that increases military communications capabilities for US and allied forces deployed worldwide.
orbitalatk.com/

Something To Celebrate For The US Air Force 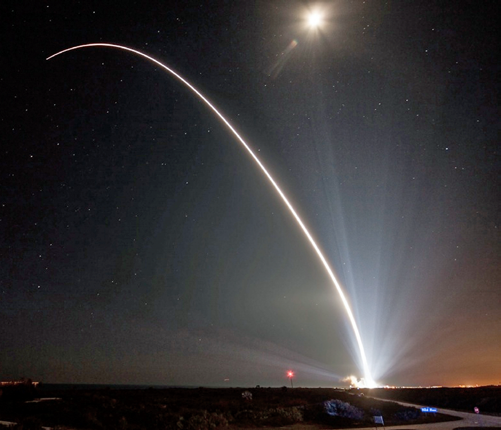 "Today's launch is a momentous achievement in WGS, as we launch the eighth WGS satellite," said Lt. Gen. Samuel Greaves, Space and Missile Systems commander and Air Force program executive officer for Space. "This accomplishment is the result of the remarkable relationship between the 45th Space Wing, 50th Space Wing, our SMC partners and industry. The tenacity and dedication to mission assurance ensures we continue to maintain a robust satellite constellation with modernized, more resilient MILSATCOM capabilities. Thanks to the astounding commitment, focus on the mission, and team work, we successfully launched the next satellite in the WGS satellite constellation."

This mission demonstrated the Air Force's commitment to deliver secure and reliable satellite communications around the globe to US forces and her allies. With this launch, WGS 8 will significantly enhance the current WGS constellation by providing increased communication capacity and coverage.

Improving on previous WGS satellites, WGS-8 utilizes a state-of the-art channelizer, which increases the communication capacity by approximately 45 percent compared to its predecessors. 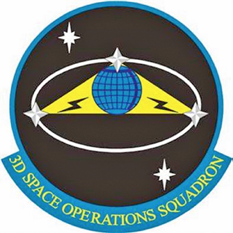 Over the next few months, Boeing will begin on orbit testing of WGS-8 to verify performance and prepare the satellite for operational use.

Ultimately, WGS-8 will be controlled by the US Air Force's 3rd Space Operations Squadron at Schriever Air Force Base.

The WGS-8 satellite will enter operations in early 2017. With two more satellites in production, the WGS constellation is planned to have a total of 10 satellites on orbit by 2019.

Aerojet Rocketdyne's RS-68A engine is the world’s most powerful liquid-hydrogen/liquid oxygen booster engine, providing 702,000 pounds of liftoff thrust to send a rocket skyward... and this was quite evident with the launch of the USAF's WGS-8 satellite.

“It is absolutely imperative that US troops and allied forces deployed worldwide receive information in the fastest way possible,” said Aerojet Rocketdyne CEO and President Eileen Drake. “We are honored to provide the launch and spacecraft propulsion capabilities to help place these critical satellites into orbit.”

For more than five decades, the RL10 has been the United States’ most reliable upper-stage engine, accumulating one of the most impressive lists of accomplishments in the history of space propulsion.

This engine has played an integral role in placing numerous military, government and commercial satellites into orbit, and powering space-probe missions to every other planet in the solar system.

The 12 Aerojet Rocketdyne MR-106H monopropellant (hydrazine) thrusters packaged in four modules on the Delta IV upper stage provided roll, pitch and yaw control as well as settling burns for the upper stage. ARDÉ, a subsidiary for Aerojet Rocketdyne based in New Jersey, furnished 14 pressurant tanks for the vehicle.

The HiPAT™ rocket engine has a 100 percent mission success track record spanning over 115 missions, including all WGS spacecraft.
Rocket.com
AerojetRocketdyne.com

Built For Nearly Twice The Bandwidth

A Boeing short video entitled "The Military boeing.com Satellite That Avoids Jams and Secures Comms" is available for viewing at this direct link

Using leading commercial digital circuit technology, the newly upgraded satellite will aid in fulfilling the increasing demand for high-data rate communications of warfighters around the globe.

“Not only does WGS-8’s cutting edge digital payload nearly double the satellite’s bandwidth, but the US government was able to realize more than $150 million in savings for WGS-7 through WGS-10 through fixed-price block purchases and commercial operating practices,” said Dan Hart, Boeing vice president, Government Satellite Systems.

“We’ve been able to both increase the capability and reduce the per-unit cost with each new WGS satellite we’ve delivered, making WGS, by far, the most cost-effective asset for military communications.”

During the past two years Boeing has made many improvements to its satellite products.

Those improvements include increasing bandwidth and capacity, incorporating independently steerable and shapeable beams that can point bandwidth to where it’s most needed, deploying the world’s first all-electric propulsion satellites, and stacking and launching together two satellites.

The WGS-9 satellite, funded through an international partnership between the United States and Canada, Denmark, Luxembourg, The Netherlands and New Zealand, will be launched early next year. Boeing is on contract for a total of 10 WGS satellites.
boeing.com