Although it is often apparent when changes are on the horizon, their exact nature can be difficult to discern. For the space industry, a clearer picture of the impending changes began to form in 2016. These include the use of cheaper spacecraft in larger numbers, lower-cost launches, the democratization of space, and the exploration of new space-related industries that go beyond the acquisition and transmission of data.

Some of these changes were suggested by dramatic events. A nation that was once the foremost space launch provider fell to nearly half its typical launch rate in 2016 and suffered losses in infrastructure reliability and talent. Launch companies that were once considered premiere space industry mainstays endured job and business losses.

The ways in which space products and services are produced and used are changing, and the industry is adjusting accordingly. 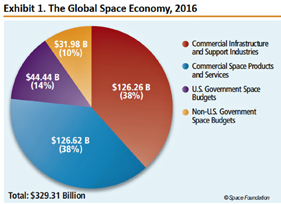 The global space industry grew in 2016, reaching $329 billion, up from $323 billion in 2015. Although changes in currency exchange rates once again had a negative impact on non-U.S. revenues as they were converted to U.S. dollars, the effect was substantially less than in 2015, when the total value of the space economy appeared to decline due to large shifts in exchange rates.

In 2016, revenues from commercial sectors continued to represent slightly more than three-quarters of all global economic activity in space. Commercial space products and services—including telecommunications, broadcasting, and Earth observation—constituted the largest sector at $126.62 billion in 2016, essentially unchanged from the year before.

Commercial infrastructure and support industries—including the manufacture of spacecraft, in-space platforms, and ground equipment, as well as launch services and insurance—totaled $126.26 billion in 2016, a 5.3 percent increase.

The U.S. government spent $44.44 billion on defense and non-defense space efforts in 2016, a 0.3 percent decrease from 2015. Non-U.S. government space investment declined by 0.4 percent in dollar terms, primarily due to exchange rates, to a total of $31.98 billion in 2016. In reality, most countries increased their budgets for space activities.

These small satellites significantly contributed to growth in data products, which other companies used to create more space-based products and services. Although these smaller satellites were cheaper to build while incorporating acceptable risk, the required launch infrastructure remained relatively expensive until 2016 due to a slow launch tempo and its associated uncertainty and general service costs

In 2016, two U.S. companies continued to launch—then land—space launch vehicles. While the full consequences of reusability have not been explored, grudging price responses from other companies seemed encouraging. From pricing disclosures on new websites to announcements of launch intentions from newer and smaller launch providers, competition started to chip away at launch prices during 2016.

Satellite numbers continued to increase during 2016, with remote-sensing satellite deployments more than twice outnumbering deployments of the next most-popular satellite category. At the same time, discussions were underway to orbit constellations of thousands of broadband communications satellites, spurred by an ever-increasing demand for ubiquitous data availability.

This potential change from fewer than two thousand satellites orbiting the Earth in 2016 to possibly several thousand energized a drumbeat of concern regarding space debris, satellite collision avoidance, and space situational awareness.

One stakeholder, the United States Air Force, has long maintained and updated a publicly available catalog of space objects orbiting the Earth. To supplement this resource, commercial space situational awareness providers grew in membership and customers as more interests and businesses moved into space.

Although the space economy grew in 2016, with increases in productivity and space products and services, the space workforce for some of the major space industry actors experienced minimal gains, if any, during 2015 (the most recent full year for which data is available).

Through 2015, the U.S. space workforce continued its decade-long contraction, and the Indian space workforce also declined. The European and Japanese space workforces expanded slightly during the same time span. These workforce trends appear to be driven at least partly by newer manufacturing processes.

However, there remains high competition for skilled space industry workers, whose average yearly salaries in the U.S. continue to exceed $100,000.

Space products and services continued to change the way people do business on Earth. In 2016, satellite data proved invaluable to businesses seeking to gather more meaningful and relevant information in compressed time frames

People and organizations also combined multiple sources of satellite data and services, drawing on expertise in analysis, networking, software development, and other fields to produce meaningful products focused on specific market needs. The resulting products and services drove interest and investment in the global space economy and infrastructure.

The steady integration of terrestrial communications networks and equipment with space products and services provided a means of monitoring vehicle emissions. Some space products could also be integrated with terrestrial equipment, such as tractors or unmanned aerial vehicles, and in some cases, vehicles themselves could be integrated into the space communications infrastructure, providing broadband services to a data-hungry public.

An invitation from the Space Foundation

Since the first edition of The Space Report was published in 2006, the Space Foundation research team has gathered an everexpanding collection of information about the space industry, government policies and priorities, and the evolving trends that influence space activity. 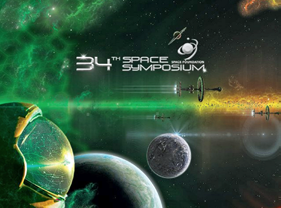 Each year, we present the highlights in The Space Report, focusing on the points that we believe are of greatest interest to a broad audience. To further address our readers’ research needs, we introduced a new format in 2015— an online service that provides subscribers with access to all the research conducted for The Space Report throughout its existence, as well as new data sets that have never appeared in the report.

We appreciate the positive response to this valuable resource, and we are expanding the types of data we offer in response to requests from our readers. To view more information about this new service, please visit
www.TheSpaceReport.org.

Note: The data contained in the 2017 Space report is derived from 2016 statistics.

Upcoming is the Space Foundation’s 34th Space Symposium, conducted in Colorado Springs, Colorado.  Now in its 34th year, the Space Symposium has come a very long way. The inaugural event saw some 250 space enthusiasts gathered in a single meeting room at The Broadmoor. This year will see the largest number of exhibitors in its 34 year history, with nearly 200 exhibits in the Ball Aerospace Exhibit Hall and expanded Pavilion.

The 34th Space Symposium kicks off on Monday, April 16, 2018, in the International Center of The Broadmoor with the Opening Ceremonies. Several prestigious Space Foundation awards will be presented to individuals and organizations to mark their phenomenal space-related achievements.

To learn more about the Space Symposium, and to register for this event, please access www.spacesymposium.org/. 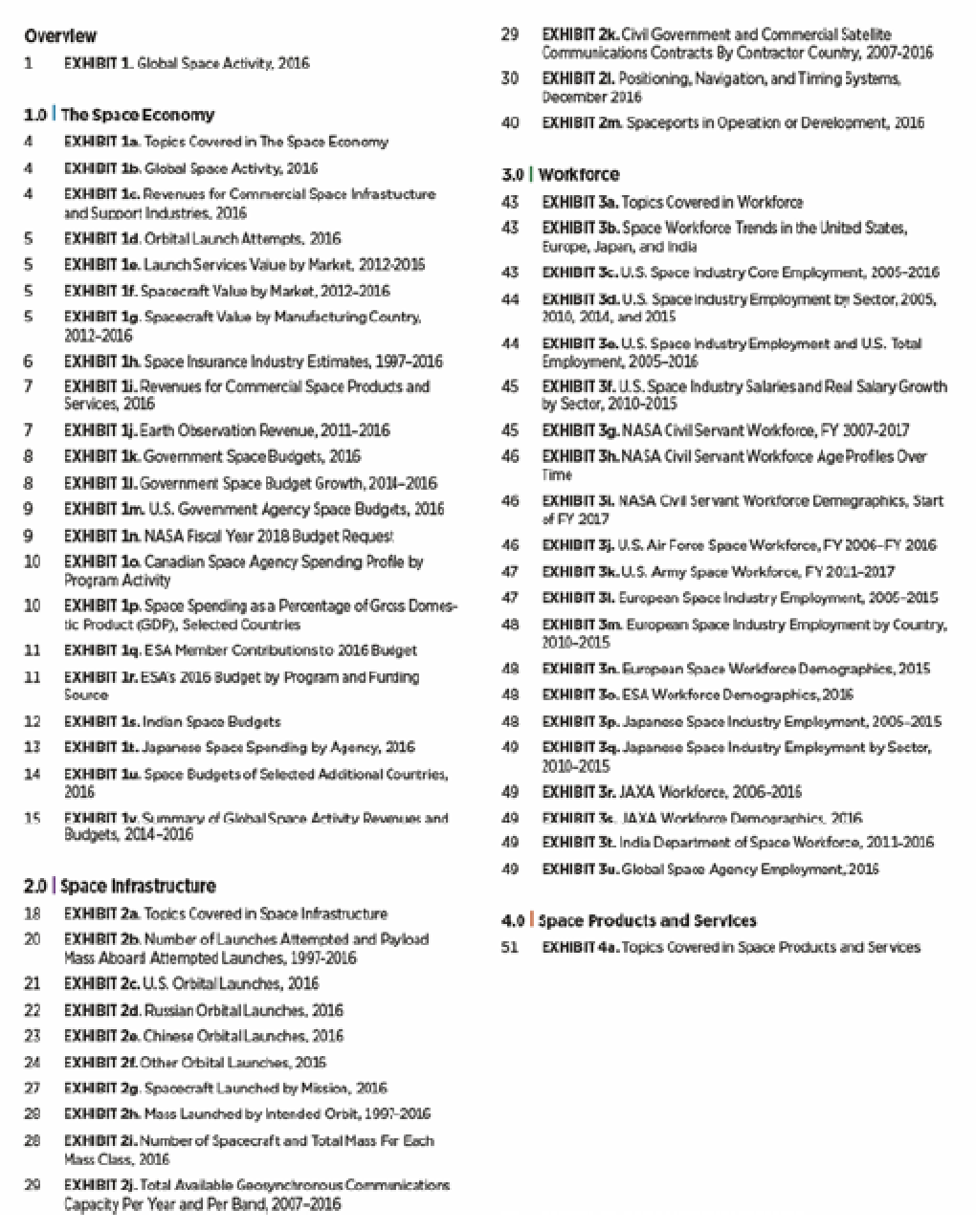