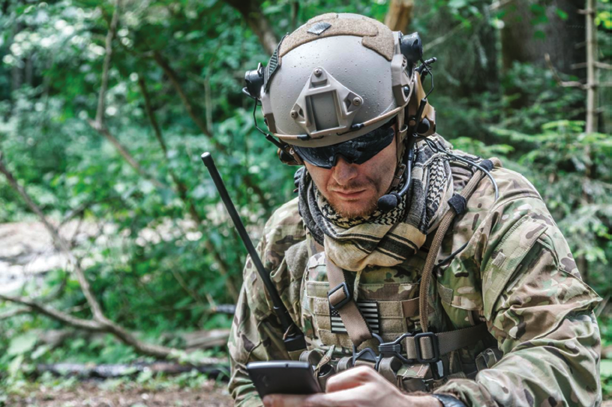 At their core, AI enabled applications will have the ability to analyze vast quantities of data generated by a proliferation of sensors such as video cameras, electronic warfare sensors, signal sensors, cyber sensors and more. Effectively trained and protected, AI enabled applications will be able to process this data, analyzing for patterns, anomalies, objects, and behaviors — faster, more accurately, less expensively, more safely and more tirelessly than humans.

This article explores how the Department of Defense (DoD) can think about COTS technology for tactical use of AI, which military applications can benefit from AI, key challenges, as well as primary steps to deploy AI at the tactical edge.

Due to the broad nature of data processing problems that AI solve, today’s militaries are looking to deploy AI in a large number tactical of use cases, such as: 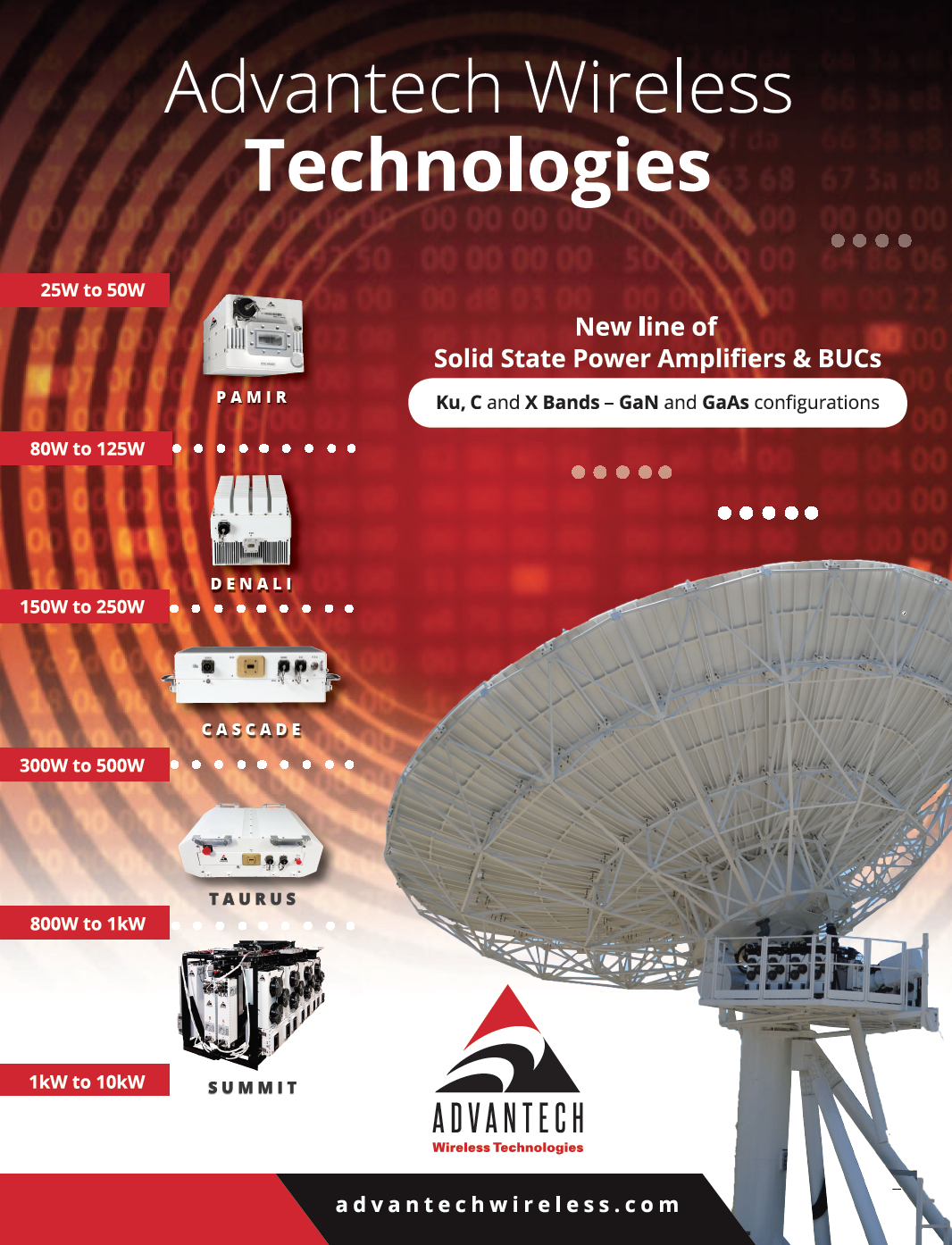 Most of these applications are made possible by innovations in sensor technologies which can produce exorbitant amounts of data through functions that extend beyond simple motion-detection and similar binary functions. Sensors now have the ability to scan large environments using multiple spectrums, identify moving targets, identify sounds such as gunfire, monitor temperature, pressure, vibration and humidity levels in real-time — and with the advent of inexpensive wireless long-range sensors and numerous, sensor laden autonomous systems — the future battlefield is poised to be covered with sensors at unprecedented scale.

View Every Soldier as a Sensor
One of the sensor platforms undergoing the most innovation are human sensors, technically warfighter wearable sensors. Leveraging AI to analyze myriad soldier data can be used for predictive health, and data generated by solider mounted sensors can guide quick and effective action.

The two-way flow of data for applications, such as facial recognition of enemy combatants, can inform both DoD decision makers and warfighters, thereby improving situational awareness and battlefield decision making. These sensor-based analysis capabilities will be critical in enabling the next generation battlefield that more quickly identifies threats to improve the safety and effectiveness of warfighters missions.

This vision of the soldier as a sensor is quickly evolving, with U.S. Army rapidly developing and testing a variety of technologies under a concept called the Adaptive Squad Architecture, which brings together project managers from across multiple programs to develop an integrated, smart solider worn system of systems — and programs such as PM Integrated Visual Augmentation System already piloting networked, wireless, augmented reality systems with sensor fusion capabilities. These new systems use large portions of Commercial-off-the-Shelf (COTS) technology, to demonstrate how AI can deliver on the promise of AI benefits to the warfighter. 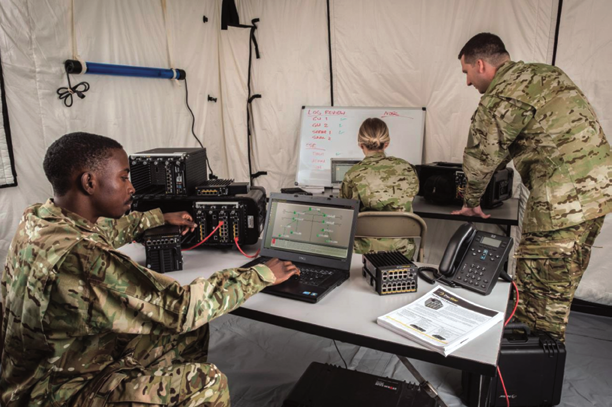 JAIC is front and center in bringing AI to the tactical edge by ensuring the infrastructure is in place to support data and analytics requirements. Shanahan cites the 160th SOAR (Special Operations Aviation Regiment) and its entire H60 fleet, which is subjected to rough desert conditions in the Middle East where sand melts into the engine. They are using AI for predictive analytics, to predict and avoid potentially devastating fleet failures.

Though COTS can play a key role in accelerating emerging technology adoption including AI, defense applications for AI have unique requirements and constraints. While Lt. Gen. Shanahan reaffirmed they are taking a “commercial first” approach because of the pace of commercial sector technology development, he acknowledges AI isn’t necessarily plug-and-play for DoD.

Unique and challenging systems and workflows means that, for COTS to work for AI, some lifting needs to be done to adapt the technology for specific military requirements. The ability for AI to be deployed and used in an effective role at the tactical edge is impacted by the nature of the use cases being addressed, the AI approaches used, and how the AI is architected.

Algorithms used in machine learning and AI applications require different skill sets than traditional algorithms and require experienced data scientists who know how to adapt data sets to train AI algorithms to learn from themselves.

Fortunately, the commercial industry is investing heavily in tools that are available to DoD on a COTS basis, that streamline the data management, model building and model training processes.

However, tactical implementors of AI based systems face additional challenges unique to their environment, even among AI developers. While typical AI developers in the commercial industry can use enterprise data center or cloud-based computing resources to process and store massive volumes of data acquired via sensors — those resources are simply not available in tactical settings today — tactical organizations are not able to rely on WAN connectivity from sensor to enterprise datacenter — so parts or all of AI workloads need to be moved closer to the sensors. This requires an entirely new architecture to make AI effective in tactical settings and for unique DoD requirements. 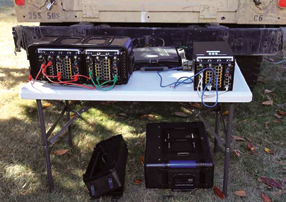 PacStar advanced communications in action at the
50th Signal Battalion (Expeditionary), 35th Signal
Brigade.  Photo is courtesy of the company.

The unique AI deployment challenges that tactical programs face fall into several categories, the first is what is known as DIL — Disconnected, Intermittent, and Limited bandwidth. Tactical networks deploy in areas with unreliable, slow, and threatened WAN connections — due to the nature of how they deploy. Where enterprise networks can frequently comprise multiple gigabit per second connectivity, tactical communications may be limited to satellite networks providing only 4 Mbps, at very high latency — sometimes for sizable teams. Clearly, attempting to transmit dozens of UAV sourced HD video streams over links like these, to enable AI processing in the enterprise datacenter or cloud, is untenable.

A second category of challenges for tactical programs is SwaP — Size, Weight and Power — of deployed equipment. Tactical programs today strive to improve mobility — speeding deployment time, reducing the number of vehicles required to transport equipment, providing more maneuver options for commanders, and removing soldiers from harm’s way. Enterprise AI developers don’t have those types of constraints. For example, a typical enterprise AI development server might have tens of thousands of GPU cores and consume thousands of watts of power, where a tactical server might be on a limited power budget of just a few dozen watts.

Using COTS to Deploy AI at the Tactical Edge
Relative to custom-built hardware and software, COTS technology offers military organizations the potential to reduce costs and shrink the acquisition timeline. This is particularly valuable for emerging technologies where the commercial industry is investing heavily in technologies that are horizontal, but also adaptable to meet DoD unique requirements. 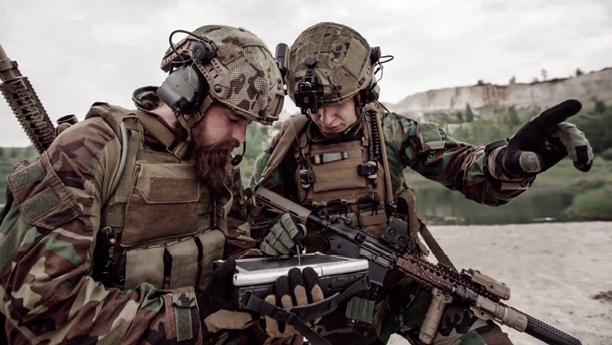 Bring Your Data Center with You
Thanks to DIL, warfighters can’t rely on being able to communicate with their data centers (or cloud) at home, so can’t rely on giant compute resources being available for AI... unless they bring those resources to the fight. The good news is that small form factor COTS modular data centers (MDCs) that can be deployed dismounted, in command posts, ground vehicles, aircraft, and FOBs are now becoming available.

Designed using small form factor hardware, this addresses SWaP constraints, and allows warfighters to tap into emerging technologies at the tactical edge — including many of the AI- based applications discussed above. Some systems can be customized to optimize for high amounts of compute or storage, depending on the use case and types of sensors providing data.

Combined with software that can replicate data in clouds or datacenters, MDC solutions can be an organization’s infrastructure to deploy AI workloads closer to the sensors, ensuring the benefits of AI, and preparing for the arrival of AI applications able to distribute the computational workload throughout tactical networks.

Bring Your COTS AI Accelerators with You
AI experts understand that machine learning and processing data in video streams requires high performance computation, and that certain types of computations lend themselves to highly efficient acceleration through the addition of supplemental hardware such as GPUs.

While it’s not feasible for tactical organizations to deploy GPU enhanced servers containing tens of thousands of GPU cores at the edge of the network, advances in COTS embedded, rugged power-efficient GPUs make possible the prospect of distributing and accelerating AI workloads at edge.

Organizations seeking to field tactical AI should look for compute platforms that can add GPU acceleration to their capabilities, to be ready for the new generation of AI-enabled applications designed and optimized for GPUs at the edge.

Start Your Design with Distributed AI in Mind
Using MDCs equipped with GPUs, organizations can put in place the hardware foundation that can overcome SWaP and DIL challenges. AI’s remaining challenges, standing in the way of “plug and play” for tactical DoD, is the need for distributed AI-based applications. Programs looking to deploy AI in tactical settings should begin by looking for solutions that can be adapted to distributed architectures.

Specifically, AI-based applications should be architected to perform computation on bandwidth intensive (that is, large) data, locally, on MDCs — reducing the requirement for high bandwidth connections to central datacenters or cloud resources. They should also be architected to run in a completely disconnected environment. Ideally, warfighters at the edge with marginal connections only transmit metadata or abstracted data over WAN connections.

In some architectures, warfighters at the edge may only execute “runtime” versions of AI models — restricting machine learning operations to upper echelons with substantial computational resources, and the expert staff to supervise the machine learning processes.

AI is Just Around the Corner
Organizations looking to taking advantage of newly developing AI applications, or looking to “future proof” their network modernization programs should consider developments in COTS modular data centers and COTS AI accelerators — which are mature enough for fielding now, and ready to host the myriad of applications on the way.
pacstar.com

Charlie Kawasaki is the Chief Technical Officer at PacStar.