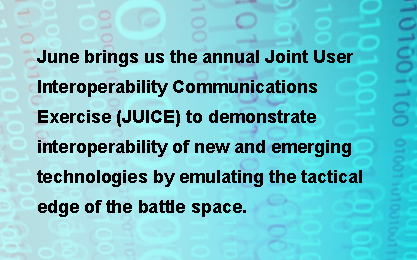 This worldwide event is hosted by the U.S. Army Communications Electronics Command (CECOM) Software Engineering Center (SEC) in conjunction with Strategic Command (STRATCOM). Of course, in every JUICE exercise, seamless connectivity is the main focus but every JUICE event has new and exciting themes. The primary themes for JUICE 2013 are ultra-portability, throughput and cyber security.

Quite often when discussing the portability of a remote terminal, the focus is simply on the device’s physical size and whether the terminal is airline checkable, fits in aircraft overhead storage or meets the definition of man packable. Although the physical size is clearly important, JUICE will be evaluating terminal capabilities using a broader definition of portability.

One of the first tests of a MICROSAT terminal will be to time uniformed satellite communications personnel unpacking, pointing the antenna, joining the network and transmitting packets. Other aspects of portability will be evaluated including power consumption of the terminal and use of alternative power sources.

The JUICE 2013 test plan includes a series of tests designed to evaluate one of the most interesting power-saving features of a terminal to be introduced in quite some time—the Key-Line feature. The Key-Line feature allows an intelligent TDMA terminal to command an appropriately featured BUC to go into warm stand-by when the terminal is not assigned TDMA time slots. 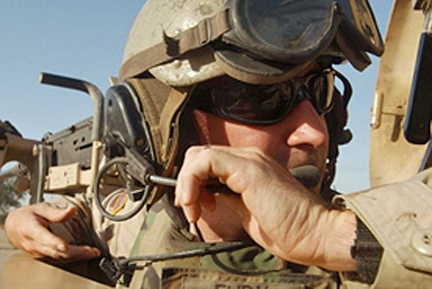 The JUICE 2013 test plan calls for a packet generator to simulate high, medium and low volumes of traffic to evaluate the impact on battery life. In other networks and tests, savings as much as 40 percent have been documented. A 40 percent battery life savings equates to a much more portable terminal regardless of configuration.

Naturally, size, weight and power (SWAP) is a major concern in a tactical, very small aperture terminal (VSAT), but performance is truly driven by the mission. Warfighters on the tactical edge have widely varying throughput and performance requirements based on mission type.

The applications demonstrated in JUICE will include voice, data and video. The applicability of a MICROSAT terminal—that is a terminal with a 65cm effective aperture antenna or even less, and weighs less than 35 pounds, to high throughput applications such as video—is determined by a number of factors including link budget and adjacent satellite interference limitations.

The JUICE tests will heavily use WGS X-band capacity. With very high Effective Isotropic Radiated Power (EIRP) and Gain/Temperature of the Wideband Global SATCOM constellation, as well as limited numbers of interference-causing X-Band satellites, we expect demonstrations to include full-motion video over MICROSAT terminals. Critical to missions using VSAT technology is the ability of a system to support high-priority traffic in a shared, over-subscribed network.

The most critical application is flash override voice traffic. It is essential, regardless of what lower priority traffic may be traversing the network, that flash override Multilevel Precedence and Preemption (MLPP) traffic be delivered with no degradation of call quality. In order to design the network to support such sophisticated Quality of Service, communicators must work in conjunction with multiple vendors across the entire link and develop a standardized definition for the per-hop behaviors of every device in the network.

Security is always a primary concern at the tactical edge—JUICE tests pay close attention to all aspects of security. In accordance with the Defense Information Systems Agency (DISA) Teleport Program Office (TPO) mandate, all remotes in the network must be under Transmission Security (TRANSEC) cover. In years past, TRANSEC was the primary security focus with an emphasis on seamless hub failover and global mobility under TRANSEC.

JUICE 2013 will focus on cyber security, which has always been a primary concern for all military networks. It has long been known that Non-classified Internet Protocol (IP) Router Network (NIPRnet) services touch the “dirty” Internet and are, therefore, vulnerable to outside attacks. JUICE network architecture will include several layers of network security with the first being routers and firewalls with very stringent access control lists. 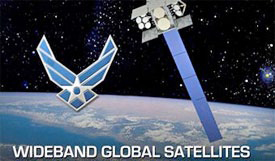 Other controls include running separate servers with software specifically designed to watch for intrusion type of IP connections. To complete the cyber security package, every workstation and server in the network is required to be compliant with the latest Security Content Automation Protocol (S-CAP) release. S-CAPS, which have effectively replaced STIG (Security Technical Implementation Guides), can evaluate a system connected to the network for known vulnerabilities.

The JUICE drills are one of the greatest examples of interagency, government and industry cooperation in existence today. Over the years, JUICE has provided valuable lessons on how to build seamless communications on the move networks, the most user-friendly TRANSEC implementations and more.

I expect this year’s exercise to provide more valuable lessons which will greatly improve the way agencies, the government and industry work together to build the best communications networks for the warfighter.

About the author
Karl Fuchs is a Senior Contributor to MilsatMagazine and is also the Vice President of Technology for iDirect Government Technologies. He may be reached via email at kfuchs@idirectgt.com. 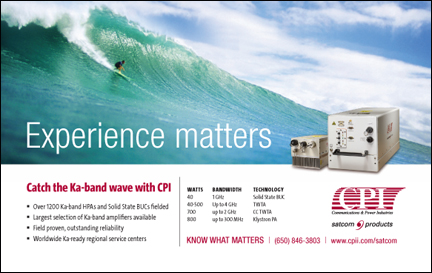