For satellite communications (SATCOM), the optical signal travels through free space to another telescope that receives the information. Free space is a broad term that includes air, the vacuum of space, or any other medium that does not involve a waveguide. 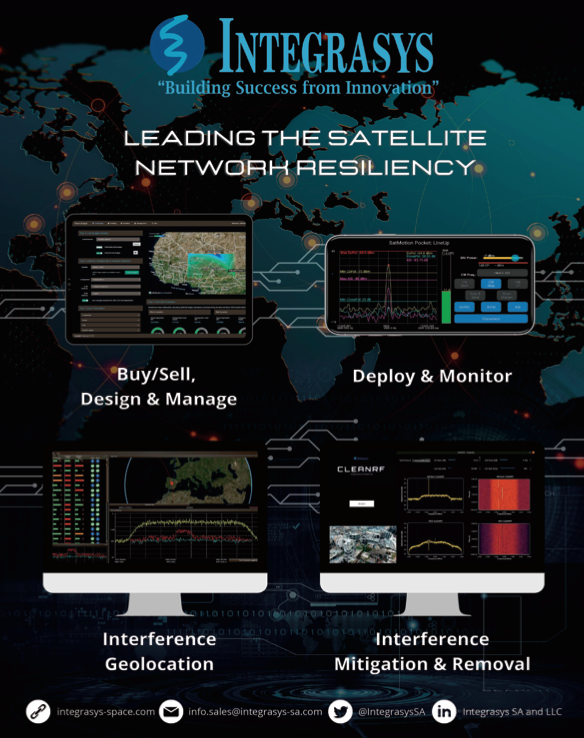 The transmission of data between satellites via Optical Satellite Links (OSL) has been used since 2001 and is a well-established technology. Free Space Optics (FSO) has also been widely used to transmit data point-to-point over terrestrial networks. However, the duplex transmission of data between a ground station and a satellite is a relatively emergent capability. However, interest is growing dramatically.

OWC has several applications in commercial and government satellite networks. While the need for faster data transmission of ever-increasing amounts of data is perpetual, data speeds over traditional RF networks are limited absent significant increases in antenna sizes and power systems. OWC provides the potential of breaking the bottleneck of RF links by using an optical carrier with a frequency 10,000 times higher than in RF. Although FSO technology applications are not yet widely deployed, satellite based FSO applications are likely to become a disruptive technology in satellite communications.

Optical Satellite Networks (OSNs) use optical Space to Ground Links (SGL) to provide high-bandwidth connectivity between satellites and terrestrial (ground) terminals. The terrestrial terminals are referred to as Optical Ground Systems (OGS). OSNs can provide connectivity to any location on Earth as long as a Line-Of-Sight (LOS) from the ground terminal to the satellite exists.

In addition to SGL links, OSLs are used for routing data traffic hop-by-hop between satellites and then up/down between the satellite and the OGS. These OISLs function as a backbone operating at very high data rates, which makes them ideal for inter-continental communications.

Each subsystem of an OGS needs to be designed and built to be interoperable with its Optical Communications Payload (OCP) counterpart. An OSN can be partitioned into three, interacting subsystems, each with their separate critical design issues. The subsystems may be physically segregated, or they may share common physical platforms. These three basic subsystems are the opto/mechanical/ thermal subsystem, spatial acquisition and tracking subsystem and communication subsystem. 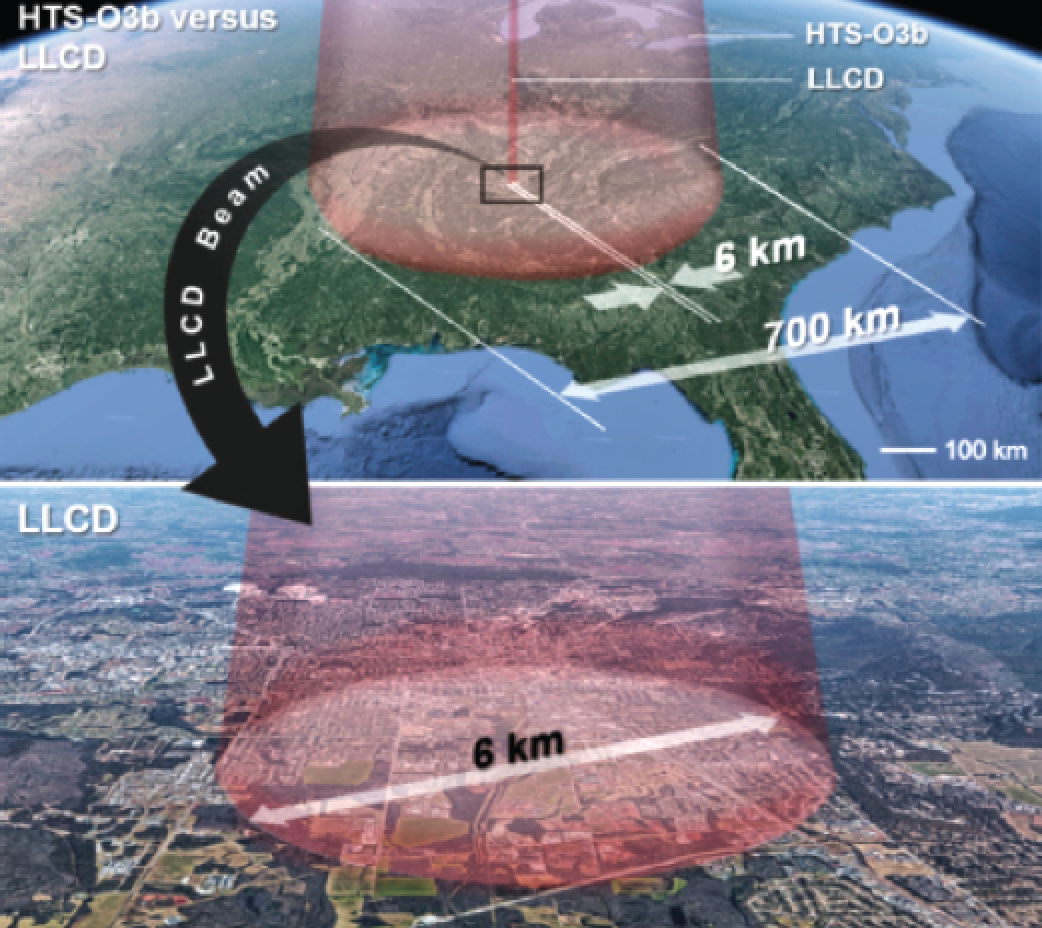 For an OGS to be designed and built to be interoperable with a previously designed OCP, the OGS must be compatible with the specifications of that space segment optical module. However, given the variety of potential approaches, the effects each design decision has on other design criteria, and the variety of environmental conditions in which the OSN may operate, OGS specifications are not yet standardized. Although groups such as the Space Development Agency (SDA) and NASA are actively pursuing standards.

OWC has multiple potential applications in both commercial and government networks. The need for increasingly higher bandwidth and economically viable data transmission solutions are driving demand for an alternative to RF. Regardless of whether data is collected over a Geosynchronous Earth Orbit (GEO), Low Earth Orbit (LEO) or Medium Earth Orbit (MEO) satellite network, the data will need to be downlinked to a ground terminal for retrieval and dissemination. As traditional satellite RF transmission links are relatively slow when compared to FSO links, optical may become the primary backbone to uplink and downlink satellite networks. 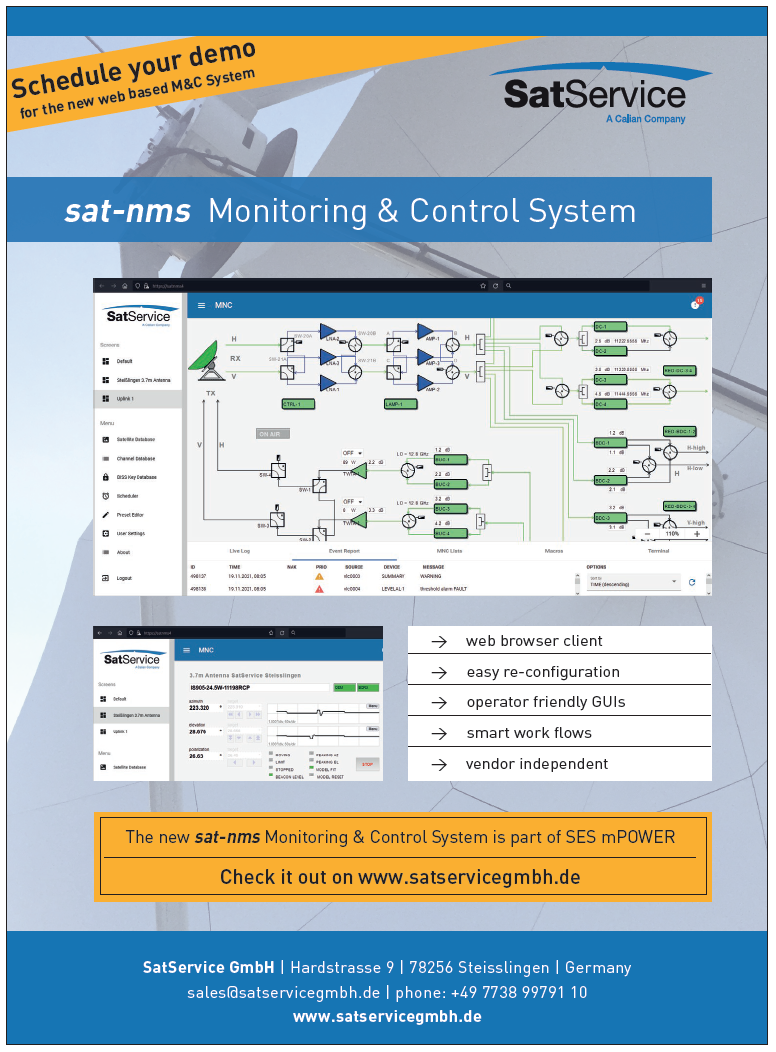 The interest in developing laser-based communications architectures is due to the many advantageous that laser communications have over traditional RF.

Speed of Data Transmission
As with most all enterprises using data, the demand for the speed of the transmission of data through networks is always increasing. OGS are expected to support data links with user rates in the 10’s to 100’s of Gbps. In addition to the speed advantage FSO has over RF transmissions, FSO also has a speed advantage over optical fiber; 3.3 µs per kilometer of link distance versus 5 µs per kilometer length of fiber.

Data Security
One of the security risks of wireless transmissions is the interception of data. The broader the footprint of a signal when it reaches the Earth, the easier it is to intercept as the energy of the signal can be received over a larger geographic area. The signal footprint of a traditional RF satellite signal is quite large, often covering an entire continent. As depicted in Figure 1, even the footprint of “spot beams” of HTS RF satellites are relatively large compared to the footprint of FSO beams. (See figure 1 on the next page...)

OWC Challenges
As with all technologies, there are challenges to implementing an OWC network. OGSs must be designed to mitigate the adverse effects of clouds, atmospheric turbulence and other environmental conditions.

When light is transmitted through the air as in optical wireless systems like FSO, it must contend with the atmosphere. The fundamental limitation of FSO communications arises from the environment through which it propagates. Although relatively unaffected by rain and snow, FSO communication systems can be severely affected by clouds, fog, atmospheric turbulence and other environmental influences.

There are multiple external parameters related to the environment in which optical terminals must operate that affect the operation and performance of FSO systems including visibility, atmospheric attenuation, scintillation, deployment distance, window loss, and pointing loss. Many of these parameters are not independent but rather cross affect each other in determining overall system performance.

However, a multitude of mitigation techniques and technologies exist to overcome these challenges and are being implemented by the architects of OWC systems. Laser communications is a subject that all of us in the satellite industry will be learning more about over the next few months. 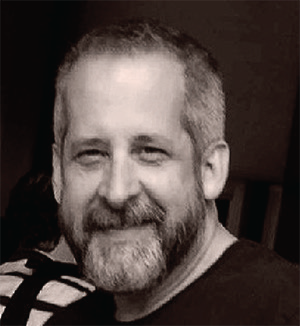 Author Roger McGarrahan is the CEO and founder of PathFinder Digital which specializes in the customization of COTS satellite ground terminal/antenna solutions that are engineered to meet the unique and par ticular needs of government programs. PathFinder’s services include the design, engineering, integration, and sustainment of VSATs for military and government applications.
www.pathfinderdigital.com