With a vision to reduce costs and increase military use of commercial satellites, Rep. Michael Rogers (R-Alabama) wants long-term government leases of such satellites.

As chairman of the House Armed Services Committee’s Strategic Forces subcommittee, Rogers is seeking to amend the current law to allow leases to go from the current one-year limit to as long as five-years.

A Bloomberg Government story gives details of Roger’s plan that would also allow the government to achieve significant cost savings by renewing contracts every five years.

Rogers also pointed out that longer leases provide long-term revenue for commercial providers that allows for funding of key technology investments by giving the industrial base the increased predictability of consistent business.

Recently, Rogers also made the following statement after the House Budget Committee introduced the details of their proposal to balance the budget over the next 10 years while cutting $5.5 trillion in spending.

“While folks across East Alabama are tightening their belts to live within their means, the Federal government should be following suit, but not at the expense of our national security. Recent cuts to our military are devastating readiness and the ability to defend ourselves.”

This is not the first time that Rogers has shared this message. In 2014, he authored a Space News op-ed discussing how the current commercial satellite services procurement model is “too expensive, lacks strategic foresight, puts our troops at risk, and disadvantages the U.S. industrial base.”

In that article, he said the Department of Defense (DoD) predominantly leases these commercial satellite communications services through expensive one-year leases and “spot market” purchases. He also discussed the need to move away from the nation’s reliability at the time on Chinese satellite systems.

“A smarter acquisition program for these services is not just good business sense, it’s a critical imperative that will allow us to stretch scarce defense resources at a time when space is more important and more threatened by America’s adversaries and competitors,” the article quoted Rogers as saying.

Rogers has actually been a long-time advocate for supporting U.S. space efforts to enhance national security.

“Space is a critical element of our national security in both peace and wartime environments,” Rogers said in a 2013 subcommittee hearing regarding the Defense Authorization Budget request for National Security Space Activities. “I am very concerned of the impact of sequestration on national security space programs.”

The industry should be heartened to see that Rogers is continuing to push the need for the correct services that support the warfighter and advance the mission in a more cost-effective manner.

Editor’s note: Our thanks to Intelsat General for affording us permission to republish this article from their blog, SatCom Frontier. 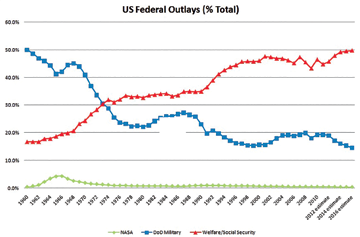 This chart was drawn using data from the U.S. Office of Management and Budget and reveals the outlays or spending by NASA in green, by the U.S. Department of Defense on military programs in blue, and by the U.S. Department of Health and Human Services and the Social Security Administration on Medicare/Medicaid and Social Security in red. The chart plots the percentage of total U.S. Federal government outlays made in each of these three major areas for 1960 through 2016.