The unprecedented budgetary pressure imposed on the military and the Department of Defence, combined with the increasing need for additional satellite bandwidth, creates a growing gap between demand and availability. Bridging this gap is a major and pressing challenge for the defence sector.

To illustrate this point, one Global Hawk Unmanned Aerial Vehicle (UAV) requires about 500 Megabit per second (Mbps) of bandwidth—five times the entire bandwidth required by all of the US military during Operation Desert Storm1. 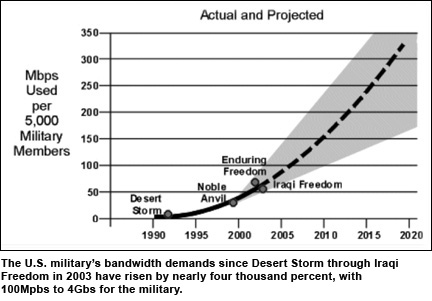 During “Operation Enduring Freedom” the Pentagon could only deploy four (one-half) of its available UAVs at any one time because there was not enough satellite bandwidth available to fly them all2. The networking and Internet technology consultancy 1 through 8 estimates that the U.S. military’s bandwidth demands since Desert Storm through Iraqi Freedom in 2003 has risen by nearly four thousand percent, from 100Mpbs to 4Gbs for a military, which is 40 percent smaller.

To run a modern war, it was estimated that by 2010 the Pentagon would need approximately 16 Gbps of satellite bandwidth to support a large joint-service, while the DoD might have as low as 2Gbps at that time.

These facts underline the serious impact that satellite bandwidth shortage is having on both air and ground force military operations around the globe today, and why there is an urgent need to find ways of alleviate the shortage.

At the opening of the Dubai Air show, French Air Chief of Staff General Jean-Paul Palomeros highlighted, to an Air Chief’s conference, the pressing problem of the shortage of satellite bandwidth, by saying that, “A move to a new standard communications band is needed because of a saturation of current bandwidth. Increasingly relied-upon unmanned aerial vehicles such as Predators, Reapers and the French Harfang generate huge amounts of data, including full-motion video, and complex sensors such as high definition video, laser designators, imaging radar, ground moving target indicators and multispectral images demand high bandwidth for transmission. 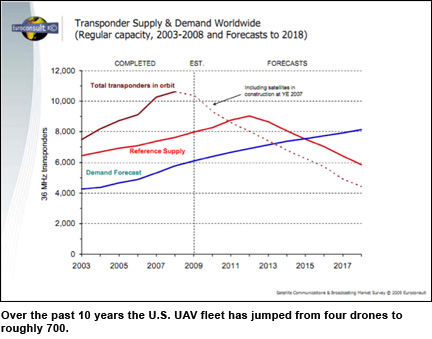 Planners estimate a large bandwidth is needed because of a “multitasking of UAVs,” with many remote piloted vehicles being operated simultaneously. According to a report in ‘Defense News’ some 20 gigabits per second is needed to cope with the growing number of UAVs, which are swamping the current Ku- bandwidth available on satellite communications links.”

UAV Deployments Gain Momentum
The problem of bandwidth shortage is likely to be further compounded by the increasing move towards a greater use of UAVs on a global scale. Over the past 10 years the U.S. UAV fleet has jumped from four drones to roughly 700. The Pentagon has recently announced its intentions of buying at least 50 more UAVs of the extended range category, signaling its focus shift towards more Communications-On-The-Move (COTM) for UAVs in the coming years. The inevitable outcome of this focus shift is that the numbers of concurrent UAV flights will more than double, leading to an even greater satellite bandwidth problem.


If further evidence was needed the graph below depicts the satellite bandwidth demand in Mbps against the growth of U.S. military personnel. To make matters worse the chronic shortage of bandwidth is compounded by the sweeping defence budgetary cuts and a growing political unrest alongside mushrooming terrorist threats on a global level. In Britain this amounts to the slashing of defence spending by about eight percent in real terms over the next four years; and in the U.S. President Obama has asked congress to scale back defence spending by a massive $450 billion over the next decade.

Light At The End Of The Tunnel
What can be done to alleviate the problem? Fortunately there is cause for optimism as a new, third generation, breakthrough satellite modulation technology NS3™. According to tests conducted independently by 49 different users, this improved spectral efficiency technology is capable of boosting satellite capacity by 20 percent, and 78 percent over the second generation DVB-S2 under identical conditions. Furthermore, the NS3™ technology is much more robust than the previous generation, especially under extreme, unfavorable conditions such as strong phase noise or power-limited satellite. Satellite bandwidth shortage is caused by two factors: first the increased demand for extra capacity caused by the growing deployment of bandwidth-hungry UAVs, which is competing for supply with other market sectors like the broadcast industry where demand has also been skyrocketing due to the increasing adoption of other bandwidth-hungry technologies such as HD and 3D TV programmes. This is set against a backdrop of a shortage of ‘space in space’ where the demand for satellite bandwidth is outstripping supply—a situation that some industry analysts estimate will reach a critical juncture in 2015 when supply will exceed demand. 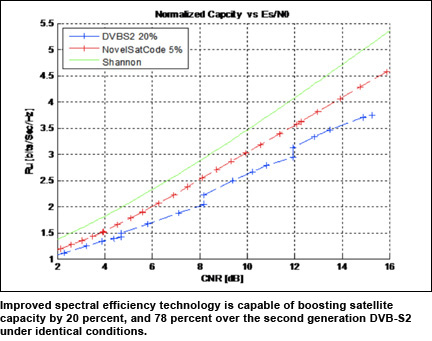 To understand the significance of the new satellite modulation technology it’s important to look at the evolution of the marketplace.

In 1995, the first satellite Digital Video Broadcasting standard DVB-S was developed. This offered a maximum speed of 45Mbps and represented a major landmark in the evolution of the satellite industry that was globally adopted as the de-facto standard. In 2005 however, a new technology breakthrough created a second generation standard, aptly named DVB-S2, which represented a dramatic improvement of around 25-30 percent on its predecessor.

Until the appearance and acceptance of the NS3™, during the spring of 2011, many believed that a full generation improvement over the DVB-S2 was not possible.

The Next Generation Of Satellite Communication
However most recently a new technology has emerged, NS3™ which has been tested in 49 independent trials by Tier One operators worldwide. Despite the initial modest claims of up to 20 percent capacity boost, many of these tests conducted on different satellites around the globe typically showed a much better result in the range of 28 percent and 78 percent increase over DVB-S2 standards and data rates of up to 358 Mbps. Such dramatic improvements have been brought about by improved spectral efficiency which enables more traffic to be transmitted over the same sized pipe.

The ramifications of this are widespread in offering either a 28 percent cost reduction to transmit the same amount of traffic over the previous best case scenario (DVB-S2) or a 28 percent and above percentage increase of available capacity in acute bandwidth shortage territories like Western Europe and parts of Asia, or a 35 percent reduction in antenna size to achieve the same throughput. Whilst taken in isolation these figures may not seem huge but set against the escalating cost of satellite transponder leasing costs they represent a huge sum of money. 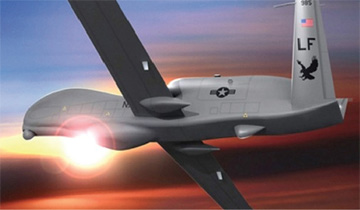 However on a 72 MHz wideband transponders the savings are dramatically increased, as NS3™ has the capability to support the full transponder with a single carrier. Previously ground equipment was limited to handling no more than 36 MHz transponders on a single carrier and had to break up the 72 MHz transponder into two carriers. With the advent of the new third generation of satellite technology the full wideband transponder can be accommodated on a single carrier, which means that you can saturate the transponder, and utilise its full potential. Unsurprisingly, therefore, some trials over wide transponders have shown a dramatic surge that ranges between 50-78 percent capacity boost over the current best equipments. This superior and unprecedented performance of 358 Mbps data rate over a 72 MHz transponder is significantly higher than the next best data rate of 168Mbps by best performing current modems.

However, the importance of this new technological innovation in the satellite market extends beyond its benefits for UAVs alone, to also encompass ground warfare. Often ground campaigns are conducted in areas where satellite signals are poor due to limited spectral availability or difficult terrain or meteorological challenges. Another advantage of this new satellite modulation technology is its ability to enlarge the satellite footprint coverage, or to operate with the same throughput while using 2.5dB lower reception quality, or providing 28 percent more capacity at an identical link budget3, fade margins and power.

Another issue for ground forces and UAVs alike is the weight and size of the antenna required to transmit the satellite signal. For ground forces this ability to reduce the antenna size by 35 percent means that the size and weight of antenna in a soldier’s individual backpack is in turn reduced. For a UAV this reduction in aerial size has significant benefits in the possibility of improving the aerodynamics of the aircraft, reduce air drag and fuel consumption and increase flight range and duration. No less important is the potential to reduce the aircraft size (which is often limited by the minimum antenna size) in order to render it less easy to detect.

Earth Observation satellites, which are orbiting the Earth every 90 minutes at around 400Km altitude, represent another frontier that can be dramatically improved by the introduction of NS3™ technology by enabling 37-50 percent faster download of video and data, as the satellite is passing for only a few minutes by their friendly ground station during each revolution of the Earth. The inherent problems regarding the cost and availability of bandwidth are equally present in this sphere of operation and here, too, the issue of performance is particularly important. Geostationary communication satellites are orbiting at around 35,786Km (22,236Mi) altitude, synchronised with the Earth’s rotation. They need to transmit ever increasing volumes of video (HDTV, 3DTV, with an ever increasing number of channels) and data.

From a Homeland security point of view, the importance of the robustness of satellite communication should not be underestimated during disaster recovery. During this past March earthquake and tsunami in Japan it was reported that more than 15,000 businesses and million and a half homes have been left without communication for a very long period of time. Out of the four submarine cables and four additional spare submarine cables that connect Japan to the United States, six of them were damaged and have become useless. One cannot under estimate the huge financial benefit, and mandatory need to build such a backup network for Japan based on this type of third-generation satellite transmission technology.

In conclusion, as 2012 beckons and defence budget cuts loom and governments grapple with the challenges of deploying more digital weapons around the globe, new technological innovation has successfully improved—despite what was previously considered impossible to better. This technological breakthrough offers fresh cause for optimism as it tackles the overwhelming shortage of satellite bandwidth to free up sufficient space in space to accommodate the brave new world of digital weapons that can help defend our planet.

References
1 Taken from a paper, titled “On the Definition of a Space Weapon” written by David Webb from the Praxis Centre, Leeds Metropolitan University.
2 According to a report by Greg Jaffe on October 4, 2002 appearing in the Wall Street Journal.
3 A link budget is the accounting of all of the gains and losses from the transmitter, through the medium (free space, cable, waveguide, fiber, etc.) to the receiver in a telecommunication system

Currently, David is Chairman of the Board for NovelSat, a high-end manufacturer of the world’s most innovative, 3G-Sat ground equipment for satellite transmission, NS3™. David’s passion for the real world global bandwidth issues that NS3™ can significantly alleviate has him personally committed to the success of NovelSat’s robust, versatile, and elite family of products featuring NS3™ that include the World’s highest quality Modulators, Demodulators, Modems, and ASIC. NS3™ is capable of boosting capacity by up to 78 percent in a wide range of satellite applications including Video broadcasting, Data, cellular backhaul, VSAT, Government, and ASIC. NS3™ removes the tuner limitation on support of 72MHz wide transponders while providing the highest data rate in the industry. 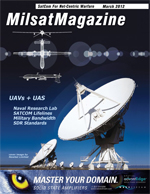