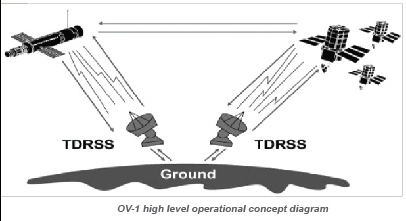 During the late sixties and early seventies the U.S. Air Force launched a series of satellites in what was known as the Orbiting Vehicle (OV) series. The satellites were essentially of a scientific and technology nature and demonstrated the use of a standard platform. The series came in five sub-series.

OV1
The Orbiting Vehicle (OV) 1 series was built by Convair (General Dynamics) as a multi–purpose spacecraft to be used in conjunction with the Atlas launch vehicle (although it was also used with other launch vehicles). The basic satellite was a cylinder of 1.40 m long and 0.69 m in diameter with a small globe on one or both ends. It included a jettisonable propulsion module with an Altair 2 (X258) solid fuelled motor. Normally the satellite was mounted in the nose cone but in several cases (OV1-1, OV1-3 and OV1–86) the structure was side–mounted.

OV1 Satellites
The purpose of OV1–1, which was launched on January 21, 1965, on an Atlas D vehicle, was carried in a side–pod on a test flight of the Atlas Advanced Ballistic Re–entry System (Abres), was to study trapped radiation. The 85 kg satellite carried an omni–directional proton spectrometer, a micrometeorite detector, an infrared/ultraviolet radiometer, an aspect magnetometer, a solar aspect sensor, a radio noise radiometer and an ion density impedance probe.

The satellite was intended to be placed in a 560 x 2400 km orbit, but the separation mechanism failed to release the satellite from the launch vehicle.

OV1–2 launched on October 5, 1965, had a mass of 88 kg, conducted radiation studies to measure the impact of radiation on humans. It also tested the back–to–back launch configuration of the OV1 series but with a single satellite mounted. The payload consisted of proton and electron dosimeters and spectrometers, an X–ray detector, a magnetometer, two tissue equivalent ion chambers, and a shielded proton/electron dosimeter.

The 92 kg OV1–3 payload, which was carried in a side pod, was to evaluate the biological hazards of trapped radiation and carried a tissue equivalent plexiglass human torso which was implanted with an ion chamber, spectrometer and linear energy transfer device. 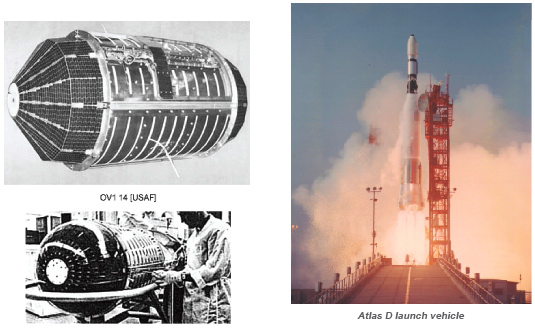 The launch vehicle exploded after two minutes of flight on May 27, 1965.

On March 30, 1966, an Atlas D launched two satellites simultaneously. OV1–4 satellite conducted thermal control experiments with wafers of various materials and coatings. It also performed zero–gravity experiments on chlorella algea and multi–cell duck weed and exposed these specimens to alternate 12 hour periods of light and darkness as photo cells measured the cell division of the organisms. The mass of the satellite was 87.5 kg.

The OV1–5 satellite, which had a mass of 114 kg,m measured the optical background of the Earth as well as the background of space to provide a basis for military surveillance techniques. Called the Background Optical Radiation experiment, it used five optical sensors, of which three pointed to the Earth and two away from the Earth. The sensors operated in the ultraviolet, infrared, and visible bands of the spectrum. In addition, the satellite tested the varistat gravity gradient stabilization system. 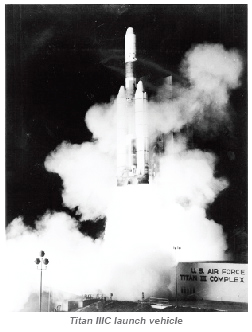 The 202 kg OV1–6 satellite, which was launched on November 3, 1969, on a Titan IIIC along with several other satellites, carried several balloons which were ejected and served as optical targets which were subject to radiometer measurements and ground observations.

The OV1–7 and OV1–8 were launched together on an Atlas D on July 14, 1966. OV1–7 was to investigate the night airglow, the molecular oxygen distribution, solar x–rays, cosmic rays, charged particles and electric fields of the upper atmosphere. The instruments carried were a solar X–ray monitor, a nightglow photometer, an electric field detector, a charged particle detector and several radio beacons. The 117 kg satellite failed to orbit, as the door of the payload bay of the launch vehicle, which were of the same design as for OV1–8, did not open quickly enough. It has also been stated the satellite injection motor failed. 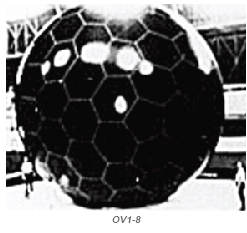 The OV1–8 had a mass of 3.2 kg and consisted of a 9.14 m diameter wire mesh sphere with a balloon inside. The satellite was used for passive communications tests and to demonstrate the feasibility of the erection of an open gird structure in space. Also referred to as PasComSat, the balloon decomposed, as planned, after a few orbits due to the intense solar ultraviolet radiation.

A number of radiation experiments were carried on OV1–9, that was launched on December 11, 1966, including an electrostatic analyzer for the study of electrons and protons, a magnetic analyzer, and scintillation spectrometer for electrons, two solid state spectrometers and range energy spectrometer for the measurement of protons, a low-frequency antenna and amplifier to study exospheric radiation, plus three tissue-equivalent ion chambers to determine the space radiation hazard to man.

OV1–11, which was launched on July 27, 1967, was equipped with eight experiments to measure solar emissions, altitude distribution of atmospheric oxygen and ozone, and charged particles. The instruments included a solar X-ray spectrometer and monitor, a plasma wave detector, a night-glow probe, an ultraviolet radiance spectrometer and instruments to measure electron and proton flux. The satellite failed to separate from the launch vehicle.

The same launch vehicle also carrier the OV1–86 which consisted of a satellite similar to the OV1–8, mated with a propulsion module as used on OV1–6. The objective of the flight was to measure the change over time in energy of cosmic rays, as well as the isotrophy of those rays. It was also to determine the emission properties of the Earth’s oxygen mantle and to determine the radiometric temperature of the Earth’s atmosphere. The instruments carried consisted of a cosmic ray telescope, a 60GC radiometer, a 1–14B interferometer and a WW–4 radiometer. As the 105 kg satellite tumbled, only partial data was gathered.

Finally, the launch on July 27, 1967, placed the 140 kg OV1–12 satellite in orbit. It made biophysical and physical measurements of the space environment during solar flare activity as part of an overall programme to assess the effect of space radiation on humans. The experiments, which were collectively known as WL701 Flare Activated Radio–biological Observatory (FARO), were a Tissue Equilibrium Ion Chamber, a Linear Energy Transfer Spectrometer, a 20 to 40 MeV Proton Detector, a 45 to 110 MeV Proton Detector, a 3.5 to 5.0 MeV Electron Spectrometer, a Solar Flare Detector, a X-Ray Scintillator, a Solid State Radiation Monitor, a High Energy Particle Detector, a Dose Spectrometer and an Omnidirectional Proton/Electron Spectrometer.

The 107 kg OV1–13 was to measure radiation at altitudes below 8000 km, evaluate the space environment’s effects on bearings and on friction between various material combinations as well as evaluate flexible cadmium sulphide solar cells. The payload consisted of a Geiger–Mueller counter, four spectrometers, a magnetic analyser, an electrostatic analyser, various material combinations for the friction and wear experiment and experimental cadmium sulphide solar cells. 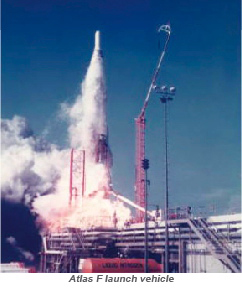 The 100 kg OV1–14 was to measure solar Lyman–alpha radiation and VLF and LF radiation in the Van Allen belts. The payload consisted of particle detectors to measure proton fluxes, proton spectra, electron spectra and the time dependence of particles dE/dX telescopes and a Lyman–alpha experiment. Due to a power failure the satellite ceased transmitting data after one week in service.

OV1–15 was launched on July 11, 1968, to identify the cause of large and sudden fluctuations encountered in satellite trajectories, with the ultimate goal of being able to predict these fluctuations and their magnitude. The satellite investigated the upper atmosphere with an array of instruments, which included a microphone density gauge, ion gauges, mass spectrometers, energetic particle detectors, solar X-ray and ultraviolet flux monitors, an ionosphere monitor and a triaxial accelerometer. In addition ground based measurements were made. The satellite was also known as Solar Perturbation of Atmospheric Density Experiment (Spades).

The same Atlas F launch vehicle also carried OV1–16, which measured the time and space variations of atmospheric density at altitudes as low as 120 km. Also referred to as Cannonball–1 or Low Altitude Density Satellite (Loads)–1, the satellite was a brass sphere with a diameter of 58 cm and a mass of 272 kg giving it a density equal to 690.5 kg/cubic meter, required to ensure the satellite would not immediately decay. It carried a tri–axial accelerometer.

On March 18, 1969, an Atlas F placed four OV1 series satellites into orbit. OV1–17 measured the incoming solar electromagnetic radiation and the interaction of this radiation with the Earth’s outer atmosphere. The 12 experiments measured the horizon day-glow and night-glow, solar x-rays, particles, electric fields, and extreme low-frequency propagation. It also tested cadmium-sulphide solar cells and thermal coatings. The satellite, which had a mass of 142 kg, was not correctly stabilzsed and spinned, resulting in four experiments that required proper stabilization returning useless data. The combined payloads on this flight have also been referred to as P69-1.

OV1–17A, also known as Orbis Cal–2, studied the unusual transmission of radiowaves through the ionosphere by monitoring the satellite with several ground stations. The 221 kg satellite consisted of the propulsion module of OV1–17 which was fitted with two radio beacons operating at 8.98 and 13.25 MHz. The OV1–18 studied the ionosphere as it affects radiowave propagation. The payload consisted of 16 instruments to measure radio interference, electric fields, horizontal ion density gradients and gamma rays. The gravity gradient booms did not deploy and the satellite, which had a mass of 125 kg, was unstable giving meaningless data. The final satellite on this launch, OV1–19, made detailed studies of the events causing and sustaining the trapped radiation in the Van Allen belts and studied the hazards to a human of incoming and trapped radiation. It carried seven instruments to study the trapped radiation and five instruments to study radiation hazards. The satellite’s mass was 124 kg.

The final two satellites in the OV1 series were launched by an Atlas F on August 7, 1971. OV1–20 and OV1–21 carried experiments to investigate the properties of the near-Earth environment. The first satellite ejected a further satellite known as OAR-901, Low Altitude Density Satellite II, or Cannonball-2. This was a brass sphere which made air density measurements in the fringes of the Earth’s atmosphere. OV1–20 itself carried an energetic proton analyzer to measure the spatial energy dependency of trapped proton flux, as well as a particle and flux thermal detector to measure the electron density and temperature in the upper atmosphere.

OV1–21 was equipped with an experiment to determine the non-linear impedance and non-linear plasma effects of a long electric dipole antenna, an experiment to measure the atomic oxygen density and the variations in this density during geomagnetic activity as well as an instrument to measure the solar flux and atmospheric composition. Furthermore the satellite released six sub-satellites: the Radar Tracking Density Satellite, OAR-907 or Musketball, which carried a C-band transponder to make air density measurements in the fringes of the Earth’s atmosphere; a 112 cm diameter rigid sphere (AVL-802 or Rigid Sphere-2); three inflatable spheres with a diameter of 213 cm (identified as Grid Sphere–1 and –2 and Mylar Balloon), which were used to determine the ballistic coefficient of spheres and measure the change in this coefficient with the changing altitude; and the Lincoln Calibration Sphere (LCS)–4, a radar calibration satellite also known as Rigid Sphere–1. 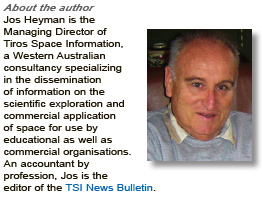 In their day, the Orbiting Vehicle series of satellites were remarkable in that details of the experiments were published, unlike other US Air Force satellites which were classified and remain so – in most instances – today. We will probably never know the extent to which these small satellites were associated with the classified programs. In a future issue of MilsatMagazine, Jos Heyman will continue the OV satellite series. 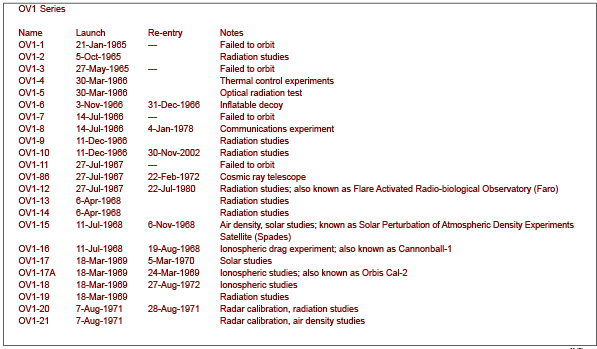