The Space Report 2020 Q2 provides a comprehensive analysis of the 2019 global space economy and examines in detail government and military spending by dozens of nations worldwide.

Space Foundation’s Research & Analysis team spent months gathering data from space agencies and governments around the world, compiled the data, and evaluated trends by nations, agencies, and sectors. According to that research, the global space economy climbed to $423.80 billion in 2019, up 2.2 percent over 2018 and expanding 73 percent over the past decade.

The gains shown in the last decade do not capture the economic instability that has rocked global markets since January 2020, when the coronavirus grew into a worldwide pandemic. While markets have shown initial effect in the first half of 2020, comparative annual analysis will not be available until 2021. 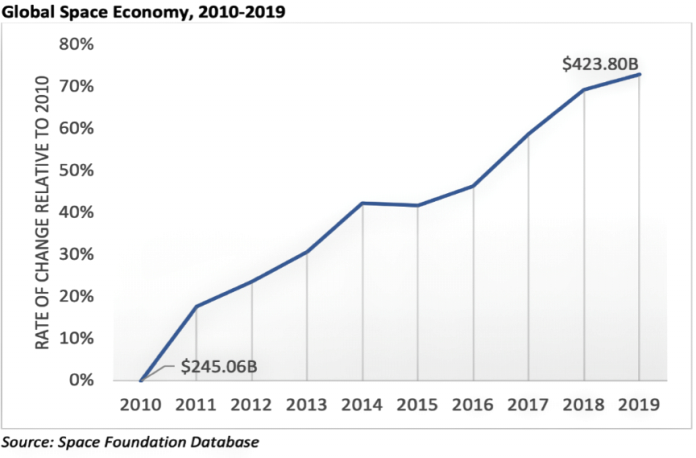 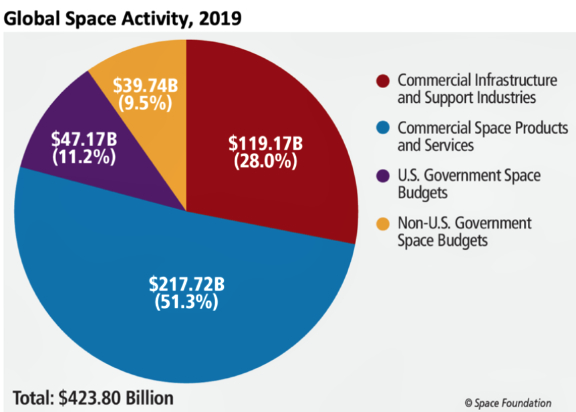 Nations and international government organizations collectively contributed $86.9 billion to the global space economy. This is a 16 percent increase over the last decade.

Space Foundation research also determined that in 2019, European countries were investing financially and in workforce development as well.

Based on 12 NAICS codes that have some broad affiliation with the space industry, U.S. job loss from December 2019 to May 2020 has totaled 241,600, according to data from the U.S. Bureau of Labor Statistics.

Two NAICS codes more specific to the space industry — Guided Missiles, Space Vehicles and Parts (NAICS Codes 336414,5,9) and Search, Detection and Navigation Instruments (NAICS Code 334511) — have grown by 1,400 jobs from December to May. Inquiries to some of the larger launch companies also reflect hiring increases during the pandemic.

Spacecraft deployment numbers rose by five in 2019, increasing slightly to 466 last year. These spacecraft were deployed from 97 successful launches, including from the International Space Station (ISS). Commercial missions saw the largest share of deployments, accounting for 54 percent of launched spacecraft (251). Spacecraft on commercial missions increased 48 percent from 170 spacecraft launched in 2018.

The military mission segment accounted for only 11 percent (53) of all spacecraft deployed in 2019, which is down when compared to 2018’s 17 percent share, with 78 deployed. 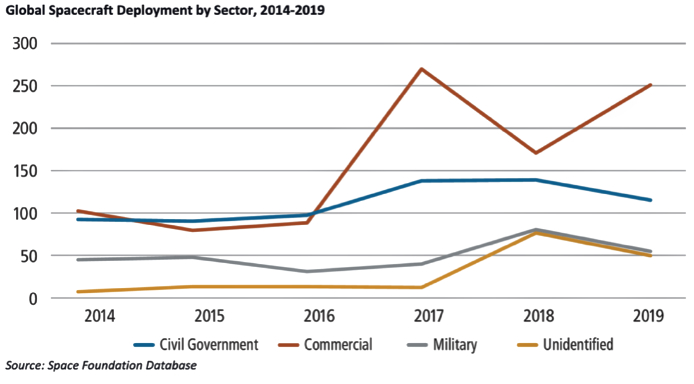 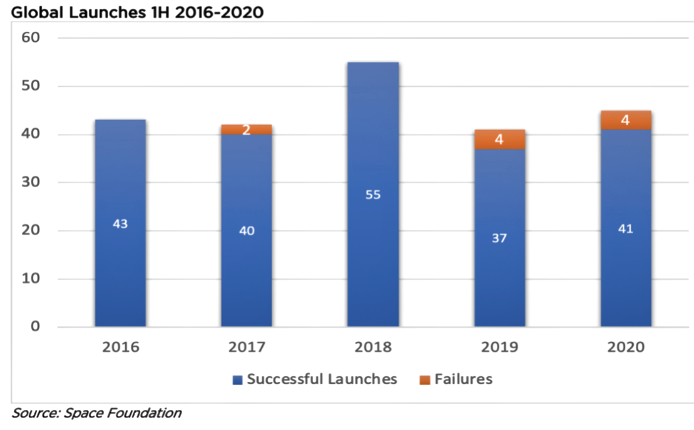 The Space Report is widely recognized as the definitive body of information about the global space industry. It contains worldwide space facts and figures and is illustrated with photographs, charts and graphs detailing the benefits of space exploration and utilization, the challenges facing the space sector, opportunities for future growth, and the major factors shaping the industry. The Space Report serves as a resource for government and business leaders, educators, financial analysts, students, and space-related businesses. For over a decade, The Space Report has chronicled the growth of the space community from around the world.

Space Foundation’s Research & Analysis team produces The Space Report, and earlier this year transitioned its annual summary into quarterly updates of global space activity. This new format makes it possible to provide the most up-to-date information on space infrastructure, facilities, launches, and programs. Similar to other major economy-measuring indicators that inform our awareness of what is happening around the world, the quarterly installments of The Space Report are designed to improve our discussions and understanding of the reach, impact, and health of the space community.

For more information about the availability, pricing, and delivery of The Space Report, please contact TheSpaceReport@SpaceFoundation.org.

For questions related to The Space Report content or the space industry in general, or to request customized research by our Research & Analysis team, please contact Research@SpaceFoundation.org. 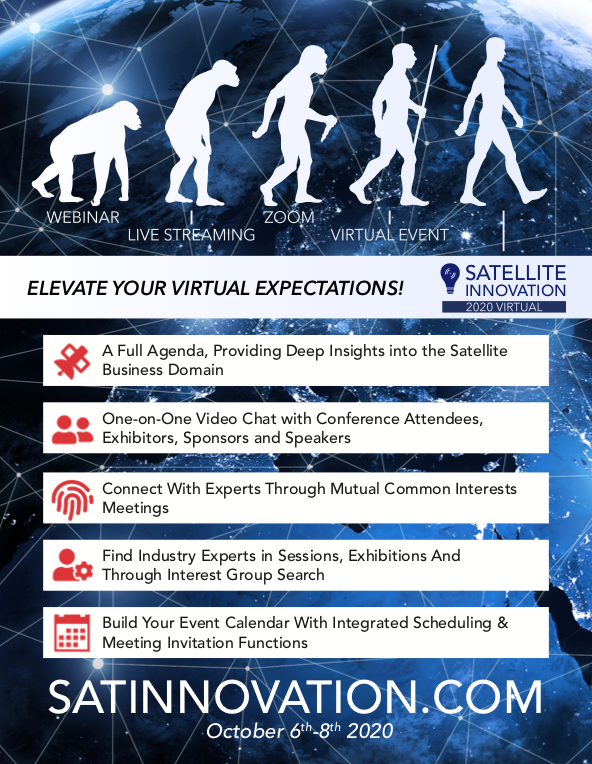