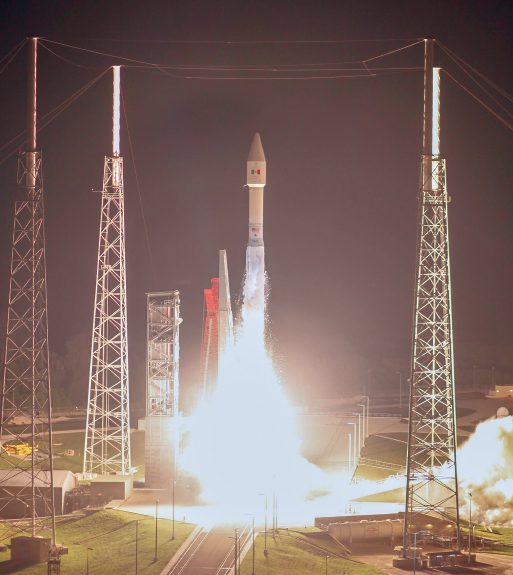 The launch of the Morelos-3 satellite for Mexico. Photo is courtesy of United Launch Alliance.

The mission, procured for Mexico by Lockheed Martin Commercial Launch Services, launched at 6:28 a.m. EDT from Space Launch Complex-41 and was the 100th successful mission for United Launch Alliance.

“Congratulations to Lockheed Martin Commercial Launch Services and Mexico’s Ministry of Communications and Transportation on today’s successful delivery of the Morelos-3 satellite into orbit, providing advanced telecommunications throughout Mexico.” said Jim Sponnick, ULA vice president, Atlas and Delta Programs. “Today was an especially proud day for our team as we launched our 100th, successful, one-at-a-time mission since the formation of ULA in 2006. Congratulations to the entire team, including our many mission partners on this unprecedented achievement.”

The Morelos-3 launch was accelerated to an earlier position on the Atlas launch manifest, thanks to an agreement with the United States Air Force. The agreement allowed the MEXSAT customer to launch atop an Atlas V rocket using a launch slot that was previously manifested for a Global Positioning System satellite.

This change demonstrates ULA’s ability to meet the needs of commercial customers and the U.S. Air Force’s willingness to accommodate the real-time and crucial needs of other satellite programs.

This mission was launched aboard an Atlas V 421 configuration vehicle, which includes a 4 meter diameter payload fairing and two Aerojet Rocketdyne solid rocket motors attached to the Atlas booster. 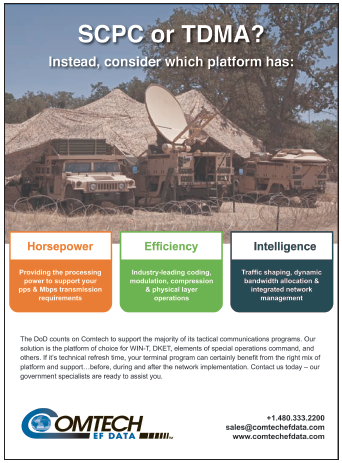 The Atlas booster for this mission was powered by the RD AMROSS RD-180 engine and the Centaur upper stage was powered by the Aerojet Rocketdyne RL10C-1 engine. This was the 57th Atlas V launch since the vehicle’s inaugural mission in 2002 and the fifth in the 421 configuration.

Boeing is responsible for the design, development and delivery of this integrated system, which is comprised of a fixed service satellite and two Boeing geomobile satellites, two ground stations in Mexico for network and satellite control, and prototype user terminals. The first Boeing-built satellite for the MEXSAT system launched in May 2015, but was lost due to a launch vehicle failure.

Morelos-3 is part of the MEXSAT constellation of satellites, which provide secure communications for Mexico’s national security needs and communications to rural zones to complement other, existing networks.

The MEXSAT program is an end-to-end satellite communications system that provides 3G+ communications services to mobile terminals across multiple platforms. These services include education and health programs, voice, data, video and the Internet. After being on orbit for 10 months and following antennas extensions as well as completing required trial runs, the satellite will start normal operations. 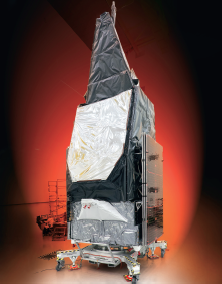 With more than a century of combined heritage, United Launch Alliance is the nation’s most experienced and reliable launch service provider. ULA has successfully delivered 100 satellites to orbit that provide critical capabilities for troops in the field, aid meteorologists in tracking severe weather, enable personal device-based GPS navigation and unlock the mysteries of our solar system.

Morelos-3 is a 702HP geomobile satellite built by The Boeing Company. The 702HP satellite will supply 14 kilowatts of power through five panel solar array wings that use high-efficiency, ultra triple-junction, gallium arsenide solar cells. The satellite will also carry a 22 meter L-band reflector that enables connectivity to handheld terminals, complemented by a 2 meter Ku-band antenna. The life expectancy for Morelos-3 is 15 years. 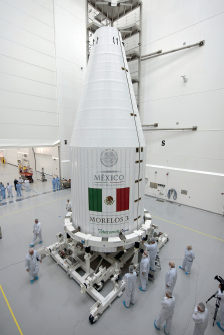 Photo of Morelos-3 in nosecone is courtesy of United Launch Services.

Morelos-3 is the second satellite within the MEXSAT communications satellite system. MEXSAT is a constellation of satellites owned by Secretaría de Comunicaciones y Transportes, a government agency of Mexico, and operated by Telecomunicaciones de México, which delivers advanced mobile and fixed satellite telecommunications throughout Mexico.

Orbital ATK’s contributions to the Atlas V and Morelos-3 satellite include cutting-edge technologies from across the company. Contributions include a large composite faring, retro motors and propellant tanks for the rocket, and thermal and structural components on the satellite. 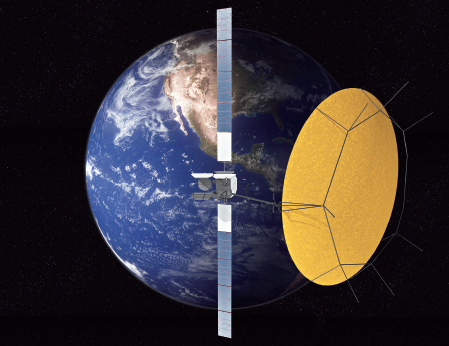 Artistic rendition of the Morelos-3 satellite, courtesy of Boeing.

For the Morelos-3 satellite, Orbital ATK provided the structures for the booms and the 22-meter payload antenna that make up the precision stable backing structure for the Harris deployable antenna. Orbital ATK’s Space Components Division facility in Magna, Utah, manufactured these components for the spacecraft.

The division also supplied propellant tanks for the Atlas V rocket. Orbital ATK has provided similar structural components for the spacecraft industry for more than 35 years from sites in California and Utah. The Orbital ATK Beltsville, Maryland, facility manufactured the Loop Heat Pipes and payload heat pipes which are an integral part of the satellite’s thermal control system. Orbital ATK has delivered more than 50,000 heat pipes to the space industry with perfect, on-orbit mission success.

“With every launch I am reminded that the products we build are extremely important to our customers,” said Scott Lehr, President of Orbital ATK’s Flight Systems Group. “We are pleased to be a part of this important mission to help increase the telecommunications capability of the Government of Mexico.” 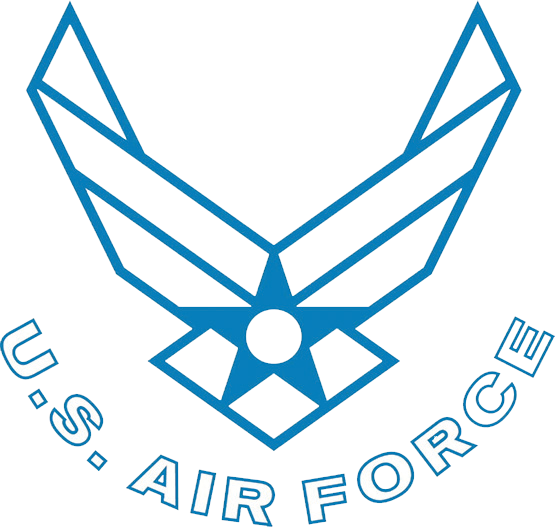 Lockheed Martin’s Commercial Launch Services provided the Atlas V rocket that carried the Morelos-3 to its destination in space. The satellite is a part of the Mexsat constellation of satellites that delivers advanced telecommunications throughout Mexico, providing secure communications for Mexico’s national security needs in addition to providing communications to rural zones, as a complement to other existing networks. 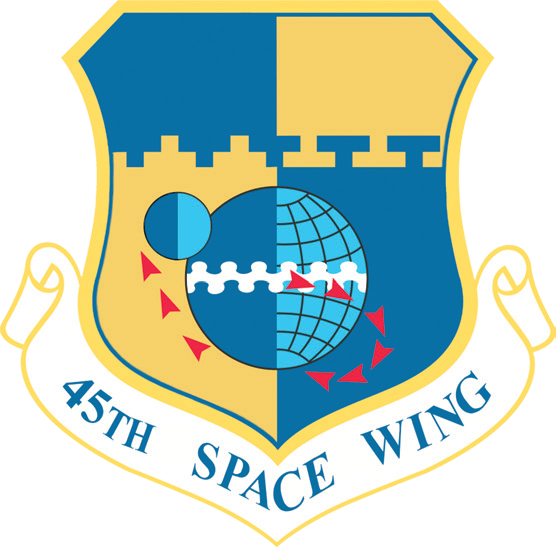 Eastern Range instrumentation provides radar tracking, telemetry, communications, command/control sites, camera and optical sites, and other support capabilities such as meteorology. Instrumentation is necessary to safely and successfully conduct civil, commercial, and national security spacelift operations and ballistic missile tests and evaluation. Eastern Range assets are based on dependable designs and technology and are arrayed in a highly efficient architecture designed to ensure safety of the launch environment and the public at large.

“Our capabilities in space have always been, and will continue to be, leveraged through partnerships with industry,” said Brigadier General Wayne Monteith, 45th Space Wing commander. “I am very proud of our team and their support of ULA’s historic record number of launches since 2006. We are the Nation’s premier gateway to space and we stand ready to support.” 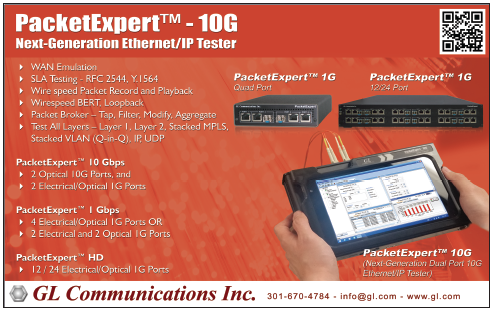