The recent award of the Hosted Payload Solutions (HoPS) indefinite-delivery-indefinite-quantity contract sends a strong signal to industry that the United States Air Force is not only interested in exploring the use of commercially hosted payloads for government applications, but has backed it by allocating nearly $500M to provide a faster path to fulfill the U.S. Government’s need. 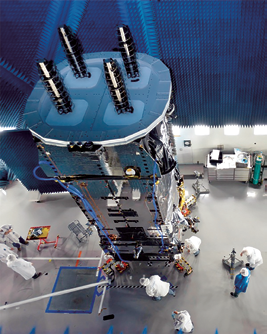 The IS-22 satellite during the build process. Photo is courtesy of Boeing.

While this is a major move forward, hosted payloads are not a new concept. In fact, as this table shows, many of the Hosted Payload Alliance member companies have been developing hosted payloads since the late 1970s.

More than two dozen hosted payloads have entered service over the last 35 years, serving customers ranging from the Coast Guard to the Japanese Government to most branches of the U.S. military, and many others.

At Boeing, the expertise in payload design, coupled with market experience in the commercial and government sectors, has created several opportunities to develop solutions to meet the demand for MILSATCOM.

These solutions have proven to be highly economical as well as expedient. A recent example is the UHF hosted payload on Intelsat’s IS-22 satellite. The payload, purchased by the Australian Defence Force, was placed into service just 31 months after the satellite contract was awarded to Boeing. This is a marked improvement over dedicated government satellites that can require as many as 10 years to be specified, funded, competed for, awarded, and finally—delivered.

More notably, the Australian Defence Force confirmed that it saved $150 million by purchasing a payload hosted on a commercial satellite versus buying and operating a dedicated satellite.

The technology is ready. The need is obvious, as well, when one considers that demand continues to rise. Latest estimates report that the U.S. Government’s demand for military satellite bandwidth is expected to rise 74 percent over the next decade. This will be an increase from the current level of 24 gigabits per second to more than 41 gigabits per second, according to a Northern Sky Research study published in 2013*. 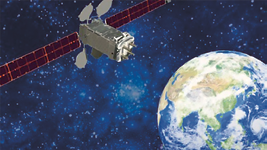 Artistic rendition of the IS-22 satellite on orbit. Image courtesy of Intelsat.

This column’s question for HPA members is...

What are the remaining barriers preventing the government’s adoption of hosted payloads and what can industry do to address these issues?

“The issue continues to be the integration of hosted payloads into system architectures. Industry must constantly remind U.S. Government customers of the benefits of hosted payloads and press for their inclusion early in the analysis of alternatives and architecture development processes. This allows for early and full integration of the hosted payload data into relative ground infrastructure and other needed linkages. This early planning is a small price to pay to take advantage of the cost savings, resilience, enhanced access to space and other benefits hosted payloads provide.”—Myland E. Pride, Director, Legislative and Government Affairs, Intelsat General Corporation

“While National Policy encourages and enables the use of hosting, challenges still remain: Government architectures for space capabilities do not yet include hosted payloads and concerns continue to be expressed about the priority commercial hosts will give to USG payload needs Industry can help by developing approaches for Government payloads which are hosted on commercial spacecraft to be readily integrated into existing Government space systems—especially the associated communications and processing infrastructures on the ground. We can also help by inviting the Government to “sit in” on some decisions about current satellites with hosted payloads aboard them; we can give them the opportunity to see how two or three partners balance their interests and concerns to arrive at a decision each partner agrees with.”—Ed Spitler, President, Airbus DS Government SATCOM

“The value of hosted payloads to both operators/owners and hosted payload sponsors has been proven with programs such as GPS WAAS and CHIRP. The challenge now is to make these deals more routine through innovative and integrated business, technical and operational solutions. For governments, both US and foreign, to take advantage of hosting, they must have payloads ready to integrate on the timelines of the host spacecraft and flexible contracting to act when flight opportunities occur. As a leading provider of government payloads and solutions, as well as commercial satellites, Lockheed Martin believes there are many untapped opportunities for commercial operators and government sponsors to enhance their business case and better satisfy mission needs through hosted payloads. Integration of the business, technical and operational solution will be a key enabler.”—Mike Hamel, Vice President and General Manager, Lockheed Martin Commercial Space

“The desire to reduce schedule and cost and the enabling technology is available today, but the U.S. Government is struggling to execute its current portfolio of programs of record. These programs, especially on the terminal end, are continuing to exceed cost and schedule estimates and any available funds to pursue new ideas are used to fund these shortfalls. If funds can be specifically budgeted to pursue augmentation of existing capabilities or development of new capabilities, innovative approaches can be demonstrated. New concepts often are not accepted until they are proven. One approach where industry may help is to make capital investments whereby the U.S. Government does not have to pay upfront but rather procures a service for a capability once it is on-orbit. Demand signals like letters of interest and/or commitment from the U.S. Government will go a long way in facilitating these efforts.”—Rich Pang, Senior Director of Hosted Payloads, SES Government Solutions

About the Hosted Payload Alliance
Established in 2011, The Hosted Payload Alliance (HPA) is a satellite industry alliance whose purpose is to increase awareness of the benefits of hosted government payloads on commercial satellites. The HPA seeks to bring together government and industry in an open dialogue to identify and promote the benefits of hosted payloads.

The HPA:
• Serves as a bridge between government and private industry to foster open communication between potential users and providers of hosted payload capabilities
• Builds awareness of the benefits to be realized from hosted payloads on commercial satellites
• Provides a forum for discussions, ranging from policy to specific missions, related to acquisition and operation of hosted payloads
• Acts as a source of subject-matter expertise to educate stakeholders in industry and government. 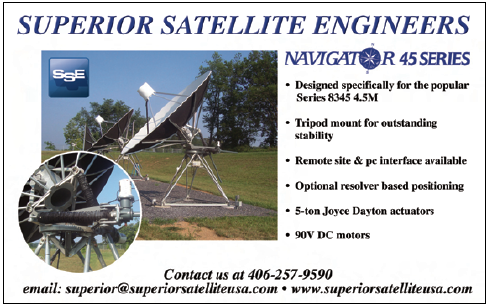