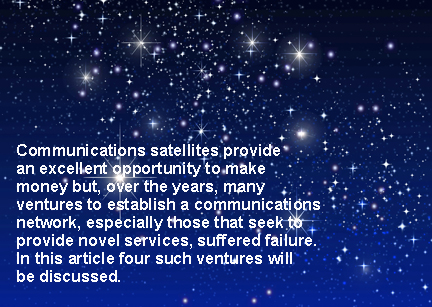 AirTV
AirTV was a proposal to build a satellite system for a global live television broadcasting network for use on commercial airliners. This came in the wake of the great success of live television on JetBlue Airways in the United States. The company was established in 1992 by a John D. Larkin. The company, with headquarters in New York, was based in Jersey Channel Islands.

The plan was to provide 60+ television channels as well as Internet and e-mail services to passengers on board commercial aircraft.

In 2000 the company signed a contract with Alcatel Space’s operating arm, Spacecom, to become one of the strategic partners.

Alcatel Space was responsible for the development of the space segment consisting of four high-powered S-band satellites. The satellites would have been based on the Spacebus platform and each satellite would have carried four very high power S-band transponders, for which amplification will have been realized by several travelling wave tube amplifiers (TWTA’s) assembled in a parallel configuration, a technique mastered by Alcatel Space for various programs. The satellites, for which the individual launch mass will be approximately 3800 kg, would each have supplied 8 kW of power for an operational lifetime of 12 years.

The initial satellite, which was to be launched in 2007 with an Ariane 5, would have been placed over the Atlantic Ocean serving flights between Europe, the Middle East and the Americas, which represented about one-third of the market. Other areas of the globe would follow after that.

Lack of finance eventually led to the cancellation of the programme and the company ceased to exist. 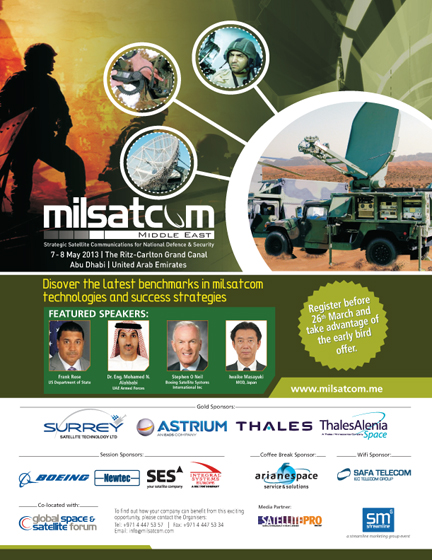 AssureSat
AssureSat was established in El Segundo, California for the purpose of placing two communications satellites in orbit and leasing those satellites out to operators that suffered launch failures. Whilst insurance companies would pay for the loss of the satellite when there was a launch failure, they would not pay for the loss of potential income as a result of not having the satellite in orbit. The Galaxy-4 failure of 1998, which disabled millions of pagers, brought this issue into sharp focus.

Recognizing a market niche, the AssureSat idea was conceived by Jerry Farrel who, from 1984 to 1997, was responsible for Hughes’s Galaxy Satellite System. At that time, the Hughes corporation, through its Hughes Global Services (HGS) subsidiary, had some experience with the acquisition of satellites that failed to achieve their desired orbit, or in some other way did not perform properly and somehow, nursed them into limited service.

In early 1998 Farrel began brainstorming with Mark Fowler, a former chairman of the Federal Communications Commission, and with Bruce Lederman, an attorney who had been an external counsel for Hughes when Farrell was president.

The trio refined the idea for AssureSat, and after garnering some seed capital, they set out to raise $540 million. Farrell identified 40 potential customers and envisaged a company with not more that 25 employees, of which five would have been responsible for the marketing.

Loral had begun limited production, with full production to begin upon AssureSat’s completion of the required additional financing. AssureSat also reached an agreement with Sea Launch in 2000 for launching the satellites on Zenit-3SL boosters in 2002.

Farrel and company managed to secure $420 million—not enough to continue—and the satellite contracts with Loral were cancelled. The company was dissolved in December 2004.

“It has been quite a learning process for me,” Farrell was quoted as saying. “We totally missed how long it would take to raise money, even though we had a business plan that was rational, that would earn money, and that was as solid as anything I’ve done before.”

As an aftermath, the Boeing Company, which had acquired Hughes Space and Communications in October 2000, was taken to court in May 2003 for stealing trade secrets from AssureSat. They managed to accomplish this by using confidential information obtained during talks to become AssureSat’s manufacturing partner.

The satellites were to be based on the Israel Aircraft Industries (IAI) Amos-HP telecommunication spacecraft bus, carrying 20 Ku-band transponders and providing 5.500 kW of power. The satellites had a design life guarantee to provide a 12 year service life.

The company also planned to build a Hong Kong-based ground satellite control center, bringing itself closer to the goal of establishing a satellite-based network covering China and other parts of Asia.

HKSTG envisaged providing communication services, particularly direct-to-home television services, to the rapidly growing Asian market. The demand was expected to intensify due to the retirement of other communication satellites that were in service at the time. In addition, it was hoped that the new satellites would be used to support the 2008 Olympic Games in Beijing.

In January 2003 it was evident that this envisaged market would not materialise and the joint effort with Israel was cancelled before the satellites had been completed.

Astrolink
Astrolink LLC was established in 1999 by three equity partners, Lockheed Martin Global Telecommunications, Telespazio (an Italian company) and TRW. They were later joined by Liberty Media Group, as the fourth and largest Astrolink equity partner.

The Astrolink system was envisaged as a global wireless broadband telecommunications network providing high-speed, end-to-end data connections to businesses and individuals around the globe, making it faster and easier for them to use such on-line applications as e-commerce, videoconferencing, distance learning and web browsing.

These services were to be provided as a “dial-up” user access mode as well as secure virtual private networks.

Astrolink had secured licenses from the FCC for five orbital slots: Americas (97°W), Asia (130°E), Atlantic (21.5°W), Europe (2°E), and Oceanic (175.25°West) and had also been working to secure operating licenses in more than a dozen countries around the world. It was estimated that there was an anticipated need for nine satellites in the five geostationary locations.

Four satellites were initially ordered. These would be built by Lockheed Martin using the A2100 space platform whereas TRW would build the Ka band communications payload for the satellites.

However, in October 2001 Lockheed Martin and TRW suspended work on the satellites and payloads as the venture failed to gain additional financing. In spite of this, Liberty Media continued to develop the Astrolink concept and came up with a revised operating plan where services would be provided to enterprise customers with private networks, rather than the end-users direct.

In January 2003 Liberty Media’s subsidiary Liberty Satellite & Technology acquired the equity held by Telespazio, Lockheed Martin and Northrop Grumman (which earlier had acquired TRW) and signed commercial agreements with these companies for the completion of the satellites. However, the revised operating plan failed and on 29 October 2003 the company announced the termination of the Astrolink project and the satellite contract were cancelled immediately.

Liberty Media Corporation is an American media conglomerate and the Liberty Satellite & Technology, Inc. (LSAT) subsidiary, through a majority owned subsidiary, On Command Corporation, continues to provide in-room movies, broadband access and other entertainment and business services to hotels, motels, and resorts.

About the author
Jos Heyman is the Managing Director of Tiros Space Information, a Western Australian consultancy specializing in the dissemination of information on the scientific exploration and commercial application of space for use by educational as well as commercial organisations. An accountant by profession, Jos is the editor of the TSI News Bulletin and is also a regular contributor to the British Interplanetary Society’s Spaceflight journal.