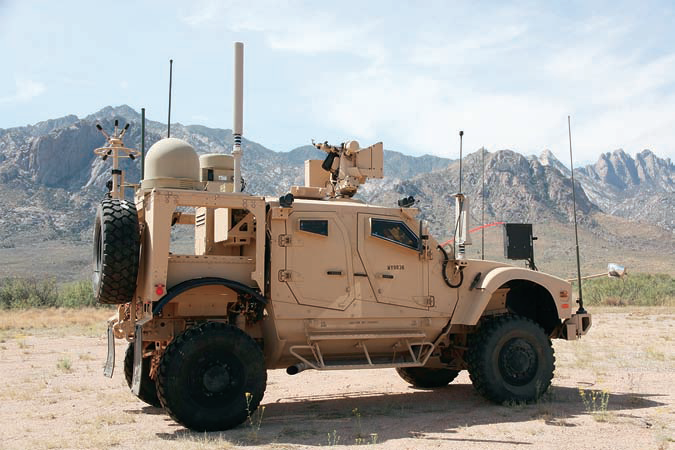 The innovative solution designed by the AIS and SES GS team is supported entirely by SES satellites. SES satellite capacity will provide support for U.S. Army research and development activities as well for testing new applications for mobile missions.

With more than three decades of experience serving the U.S. Government, SES GS has a long-standing relationship with the U.S. Army and has been supporting the WIN-T program for six years.

The SES GS infosite may be accessed at http://www.ses-gs.com/ 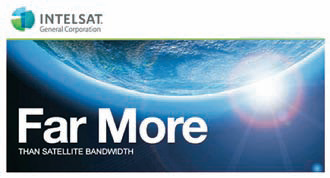 Intelsat General Corp. received a one-year contract renewal for satellite capacity from DRS Technologies, one of several previously referenced renewals that were received in the 2014 third quarter under the Future Commercial Satellite Communications Acquisition (FCSA) vehicle.

Under the contract, entering its third year, Intelsat General is supplying satellite services to DRS Technologies, a division of Finmeccanica, in support of U.S. Central Command requirements in Afghanistan. The service, which initially began in August 2012, is using 180MHz of Ku-band capacity on an Intelsat 9 series satellite over southwest Asia. 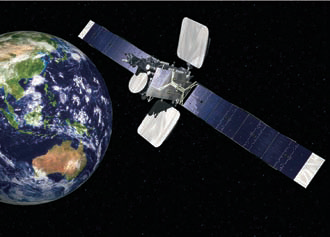 Artistic rendition of the Intelsat 18 satellite,
used to supply capacity to the armed forces
during Iraqi Freedom

“Even though U.S. troops are being withdrawn from Afghanistan, the Pentagon will continue to provide support to Afghan forces,” said Kay Sears, President of Intelsat General. “Our satellite connectivity will continue to play a key role in that support.”

“DRS and Intelsat General have teamed to support the Allied and Afghan forces with quality satellite capacity that provides connectivity for their critical communications missions,” said Jim Scott, General Manager of Global Enterprise Solutions for DRS.

The Intelsat General infosite may be reached at http://www.intelsatgeneral.com/

Additional information regarding DRS Technologies may be found at http://www.drs.com/ 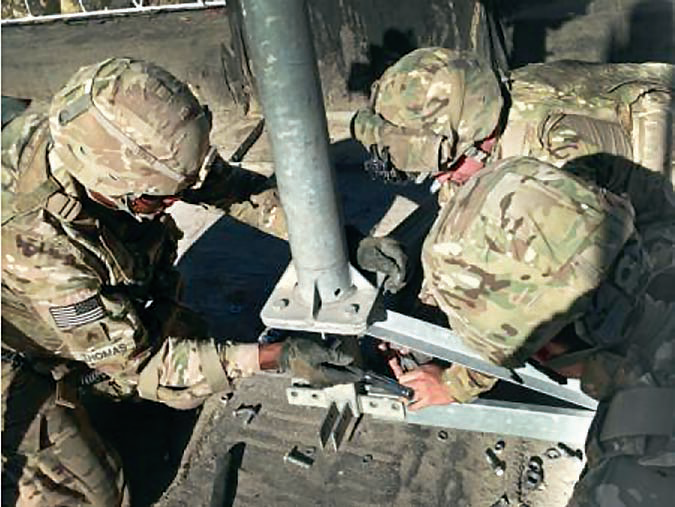 The 10th Sustainment Brigade works together to disassemble the satellite dish at the top of the Salang Pass, in support of retrograde operations. The Salang Pass meanders through the Hindu Kush Mountains and has been called one of the most dangerous roads in the world. Photo is courtesy of the U.S. Army

The SASMO team successfully recovered the first very small aperture terminal (VSAT), a device used to transmit and receive data signal through a satellite, established in Afghanistan from the top of the Salang Pass. The team also recovered a radio frequency in-transit visibility kit, a system that traces the identity, status and location of cargo from one location to another via satellite. The Salang Pass meanders through the Hindu Kush Mountains and has been called one of the most dangerous roads in the world.

As International Security Assistance Force transitions from partnered combat operations to train, advise and assist operations, commanders will adjust the size of their force and the amount of equipment in their area to meet the new mission. “There are currently hundreds of VSATs throughout the theater of operation,” said Chief Warrant Officer 4 Robert Kay, a Norwalk, Ohio native, SASMO officer in charge. “The goal is to reduce that number to less than 50.”

Reducing the number of VSATs in theater is a part of the retrograde mission put in place by U.S. Army G4.

The 10th SBDE has been successful with balancing the retrograde and sustainment missions simultaneously. 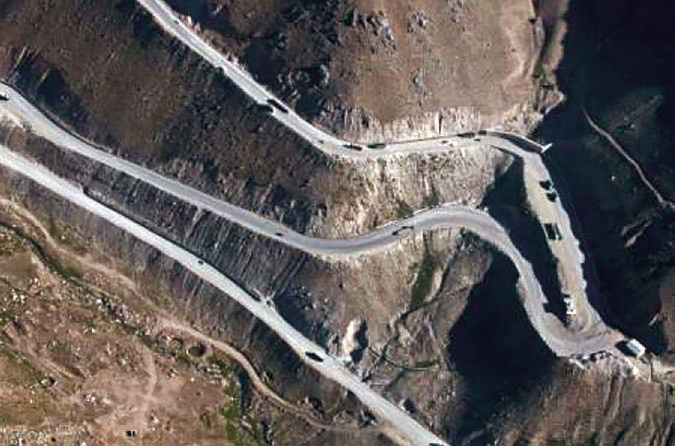 The Salang Pass meanders through the Hindu Kush Mountains and has been called one of the most dangerous roads in the world. Photo by Sgt. Michael K. Selvage, 10th Sustainment Brigade Public Affairs NCO

In the early morning hours the brigade’s convoy security team prepared for the long trek through the Salang Pass, which is approximately 45-kilometers long, by conducting their pre-combat checks and pre-combat inspections before rolling through the entrance control point.

Soldiers assigned to the 330th Movement Control Battalion played a vital role in the success of the mission by providing a heavy expanded mobility tactical truck with a load handling system in place of a flat bed.

After the convoy made it to the top of the pass, which is 12,723 feet above sea level, Soldiers from the CST provided security while the SASMO team and other members of the convoy headed to the location of the equipment, which was on the roof of a stone building, to conduct their mission. 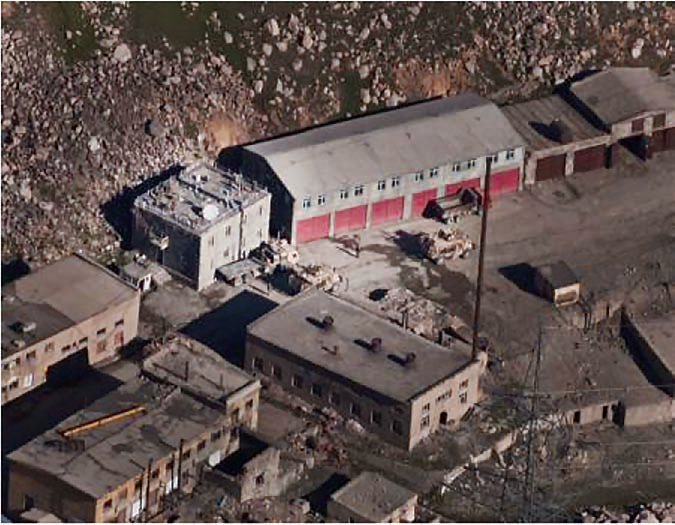 Soldiers from the convoy escort team provide security while the sustainment automation support management office team and other members of the convoy, all assigned to the 10th Sustainment Brigade, work together to disassemble the logistics information systems on the roof of a building at the top of the Salang Pass in support of retrograde operations. Photo by Sgt. Michael K. Selvage, 10th Sustainment Brigade Public Affairs NCO.

Spc. Kenneth Jobin, a Staten Island, New York native, SASMO technician, said the disassembly of the VSAT was estimated to take as long as four hours, but with the help of Sgt. Hanson Thomas, an Orange, New Jersey native, truck commander and Spc. Drake Baldwin, a Dayton, Ohio native, utilities equipment repairer, both assigned to the 10th SBDE, the work was finished within a half hour.

For the VSAT to be completely retrograded, all components had to be accounted for and secured. If not, the Army would have lost more than $96,000, which was one of the many factors that went into the planning process of the mission. The same thing applied to the RFI-TV, which saved the Army more than $23,000. 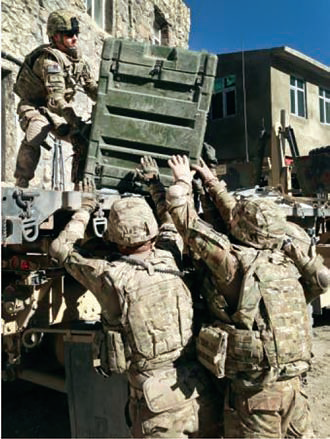 Soldiers assigned to the 10th Sustainment Brigade and the 330th Movement Control Battalion load and secure the recovered logistics information systems on the back of a heavy expanded mobility tactical truck with a load handling system in place of a flat bed at the top of the Salang Pass in support of retrograde operations. Photo courtesy of U.S. Army.

“We had to account for every single piece of the equipment,” said Jobin. “Every nut, bolt and cable... I mean everything.”

The biggest issue that arose was the mere size of the VSAT and the welded bars of metal some might call stairs leading to the roof of the stone building, especially as such was deemed unsafe to try and carry parts of the VSAT down the stairs.

An NCO made the decision to use ratchet straps to lower the components of the VSAT and RFI-TV down the side of the building alleviating any safety hazards Soldiers lowered the equipment to the ground and secured it to the HEMTT.

This may seem like a difficult task, but teamwork ensured the mission was accomplished in a timely manner.

Once everything was accounted for and secured, the convoy made its way back down the traitorous roads of the pass and back to the motor pool for an after action review. Materiel and equipment recovered from Afghanistan will increase the readiness of U.S. forces at home and prepare them for future operations.

The retrograde mission was a success, saving the Army more than $100,000, in part to the coordination and teamwork of the Muleskinner team and the Soldiers of the 330th MCB.

Link Microtek... These Joints Are Jumping...

The latest addition to Link Microtek’s expanding range of in-house manufactured microwave rotary joints is the AMCORJD-Ku dual-channel coaxial device, which has been specifically designed for use in the low-profile antennas that are a key element of
Ku-band Satellite-On-The-Move (SOTM) high-data-rate communication systems. These systems are typically deployed on military or commercial mobile platforms such as vehicles or airplanes. 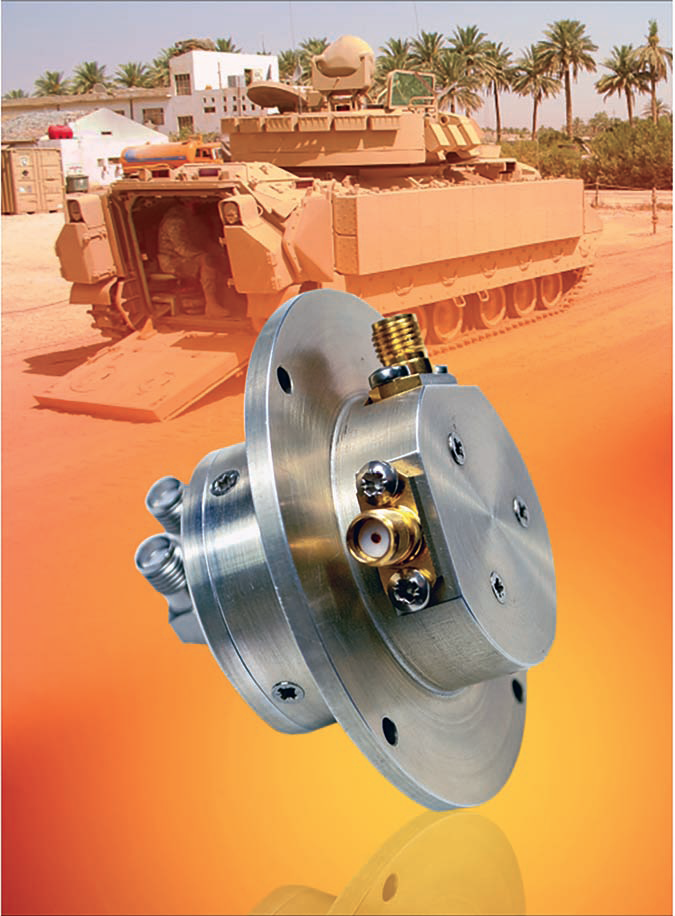 As well as featuring a height of only 31.6mm, the new rotary joint is equipped with right-angled coaxial connectors tominimize the vertical space required for cables.

The offering also offers high-current capability on the receive channel, which means that both the antenna’s LNB and the motors that keep the antenna locked on to the satellite can be powered via the rotary joint.

This eliminates the need for additional slip rings and saving even more space.

The receive channel can handle DC to 2.15GHz at a microwave power of up to 1W CW, while typical VSWR and insertion loss are specified as 1.5:1 and 0.5dB respectively. Maximum current rating for the receive channel is 2A at 24V DC.

The body of the device is fabricated from aluminium with an Iridite finish and measures 36.0mm in diameter and 31.6mm in height excluding the female SMA-type coaxial connectors.

The device incorporates a 63.5mm-diameter bulkhead flange as standard. Other rotary-joint configurations and sizes are available on request, tailored to suit specific antenna requirements.

The investment and the deal was conducted through Swedish military C4ISR specialist, MilDef Systems AB. The solution will provide beyond line-of-sight command and control capability at short notice.

Johan Pakarinen, managing director at MilDef Systems AB, said, “Having spent more than ten years in the Swedish armed forces, I understand tactical communications requirements. Traditionally these systems are complicated to setup and require a lot of training and bandwidth. The Track24 Defence solution offers a cost effective way to quickly increase capability and it’s easy for operators to use; an hour’s training enables them to power up the Track24 units and instantly secure beyond line-of-sight communication for their operations. Combining the advanced tracking devices with tablet computers running Track24 Defence’s SCC Tactical software gives commanders blue force tracking and command and control capability wherever they are in the world.”

Neil Perriton, Track24 Defence BFT specialist, said, “NOBLE’s requirements mirrored those of a number of our military customers: They need a cost effective solution that could be deployed quickly.”

The solution will be fully operational by September of 2014.

The Track24 Defence infosite is located at http://www.track24defence.com/ 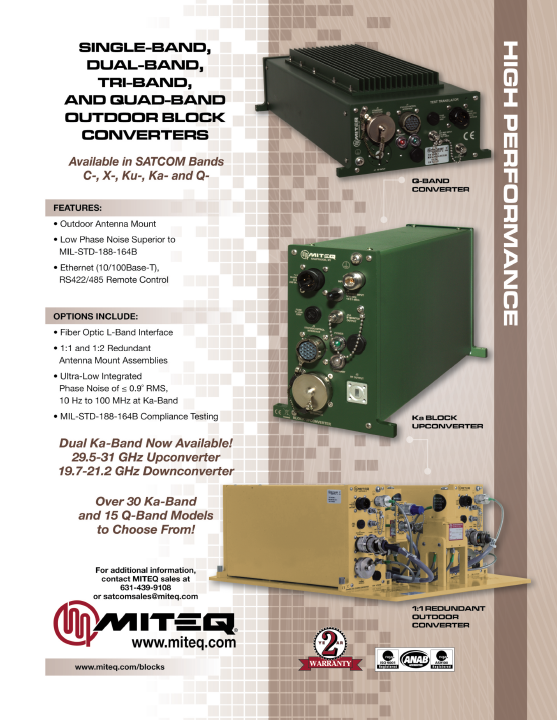