Hailing from the longest standing company in sound and vibration, Noel Brown spells out the details of the many kinds of vibro-acoustic testing that are necessary to launch reliable satellites. Since 1943, when Brüel & Kjær launched the world’s first charge accelerometer and entered the world of vibration measurement, the company has been supplying a diverse range of integrated solutions. For the space industry particularly, Brüel & Kjær has been helping with complex test analysis requirements for more than four decades. 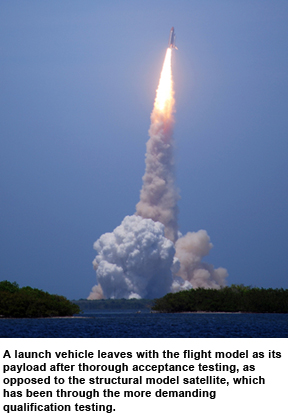 Satellite vibration testing requires a range of solutions that provide a repeatable and controlled way of introducing a satellite to a simulated real-life testing regime. Launch vibration and shock levels can be reproduced using electrodynamic shaker systems and acoustic chambers that test combinations of temperature, pressure and mechanical stress in a myriad of different combinations — where the slightest variables can be altered.

Common to all these tests is the many hundreds of channels of response accelerometer data that need to be recorded simultaneously. Forty years ago, our two-channel systems, random noise generators, spectrum shapers and more were in operation at India’s National Aerospace Laboratory (NAL) Acoustic Test Facility, but nowadays, data acquisition units must handle hundreds of input channels, sampling the input signals at very high frequencies. Then, high-capacity workstations are needed to handle the vast amount of data produced for post-processing analysis.

Recording data at these very high sampling frequencies is vital, particularly for shock measurements, which by nature are of very short duration. Sampling frequencies are the number of times the analogue signal is sampled in one second, which should, ideally, be in excess of 250kHz to get the best results. This is because with shocks from events like explosions, the data all comes from a very small amount of time.

Qualification and Acceptance Testing
Qualifying the stability and durability of satellites is a critical stage in their construction, and consequently the space industry has the world’s most demanding requirements for vibration testing. These strict testing regimes are adopted during the design, development and production stages to establish the robustness of components, subsystems and fully assembled satellites. 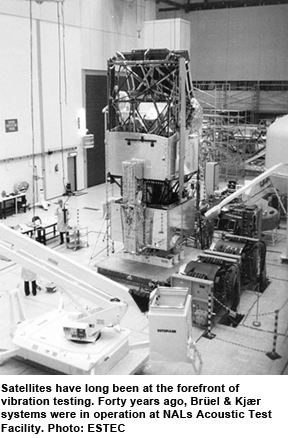 Design qualification tests are usually carried out on a structural model, which is a complete physical replica, in order to demonstrate that the design enables the equipment to withstand the vibration levels it will see during launch, by a healthy qualification margin. Acceptance tests are then carried out on the actual flight model of the satellite, in order to verify workmanship and ensure the equipment does indeed operate satisfactorily in its final configuration, and will not degrade during launch.

The satellite Qualification Test Procedure (QTP) is consequently quite different from the Acceptance Test Procedure (ATP). It’s more comprehensive than the ATP, and is performed only once to qualify the design, and of course it is performed only on the ‘twin’ satellite that will never leave Earth. The QTP typically includes environmental testing like humidity, vibration and shock tests, while the ATP is a production test performed to show that the structure meets the performance specification.

All these test requirements have led to the development of many different testing types to suit different applications.

Acoustic Testing
It goes without saying that lift-off is a noisy time, and the high acoustic levels experienced by the launch vehicle and payload can have a dramatically damaging effect. Satellite subsystems with a large surface area and low mass can be very sensitive to acoustic excitation, and significant structural responses to the acoustic excitation, especially in the low frequency range, can lead to critical stress levels in the load-carrying structure itself. Equally, high acoustic levels can induce excessive random acceleration levels for the sensitive electronic and optical equipment mounted on satellites, such as equipment panels, antennae and solar arrays. 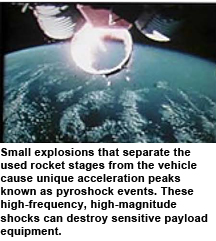 During acoustic tests, high-intensity acoustic horns blast the satellite with extremely high sound pressure inside huge chambers, to simulate the launch environment. The acoustic tests are designed to induce dynamic responses in the test specimen similar to those experienced in flight, and require nitrogen to actually drive the horns, typically for two-minute-long tests.

Sound levels up to a staggering 160 dB are used, which to the unacquainted may not sound like much, but the threshold of pain is at about 120dB, so being in the chamber would be a decidedly bad idea! For a rough comparison, 160 dB is about equivalent to multiple jet aircraft lifting off simultaneously from a few metres away.

Swept-sine Testing
Swept-sine testing involves vibrating the satellite on a large shaker to locate structural weaknesses, and to assure that no significant structural dynamic changes have taken place during pre-launch assembly and testing. One form of sine testing typically used in satellite testing is a resonance search. All structures have a frequency at which they resonate and amplify the effects of vibration, so it is vitally important to know when and where this occurs in a satellite.

In resonance search testing, the mechanical shaker vibrates the satellite at low amplitude, and sweeps from a low frequency to a higher frequency. This is usually done at a constant logarithmic rate. As the shaker’s control system sweeps the shaker up in frequency, the resulting vibration is tracked and measured. 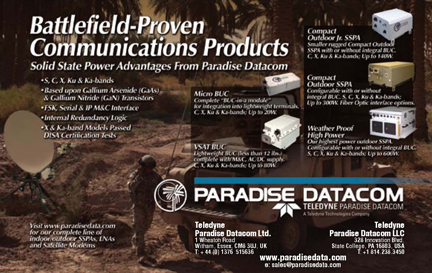 Typically, a transmissibility or transfer function plot is then produced, showing any difference between the input signal and the actual measured movement of the test object. This ratio between response and input allows the particular resonance of the structure to be known and documented in detail.

Another form of sine test is an endurance test, which vibrates the test object with a varied frequency range that sweeps up and down for a specified number of sweeps or a defined test time, which is typically hours.

As with the resonance search test, this test does not simulate a specific real-life environment in the way that acoustic testing does. Instead this tests for material fatigue in a highly controlled and prescribed manner, which in turn facilitates highly accurate expectations of material performance.

For a more realistic simulation of a real-life environment, broadband random vibration is often used. The random vibration excites a defined band of frequencies. Here, the resonant frequencies of the unit under test, as discovered by the resonance search testing, are excited regularly together to cause interaction and document the results.

Pyro-shock Testing
Launch vehicles, payloads and spacecraft designs often use numerous pyrotechnic devices over the course of their missions, such as during the separation of launch rockets, or during solar panel deployment. These events can emit a high-frequency, high-magnitude shock pulse that can be very damaging to sensitive equipment.

By way of comparison, we all know how a gentle tap on an empty wineglass can result in a loud response, and this is because the resonances of the glass are excited by the shock that the tap imparts. Just like with the glass, the pyro-shock rarely damages a satellite structure itself, but a shock to the structure on which sensitive equipment is mounted can easily cause failures in electronic components that are sensitive to the high-frequency pyroshock energy. Damage to mission-critical components can be severe, and thus a structure’s response to shock needs to be ascertained. 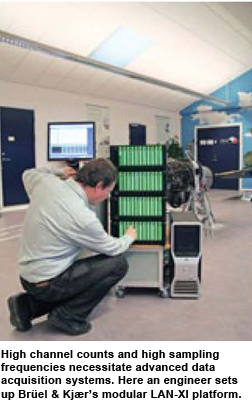 Shock Response Testing
Shock response testing is considered essential to mission success, and can not only determine whether sensitive equipment will survive, but is also used during the design phase to determine where best to fasten the satellite to the launch vehicle. For the shock test, a rapid pulse of short duration and high energy is imparted to the unit under test by the shaker system or a real pyrotechnic device, and the resulting dynamic movement recorded. From this recorded data a ‘Shock Response Spectrum’ is calculated. This details the response to the pulse at individual frequencies, and provides an in depth understanding of the response of the structure to the event.

Faithfully reproducing and recording pyroshock effects on components in laboratory conditions is beset with difficulties as even the best shakers cannot accurately simulate an explosion. As a result, the response of the structure to a pyroshock is measured and then the data from the peak acceleration is converted to show the effects of the pyroshock in simple terms for each frequency.

These simplified terms are Single Degrees Of Freedom (SDOF) that show the response of the structure in a single dimension, like a weight on a spring, instead of the complicated mess of forces produced by the explosive pulse.

The significance of this technique is that it allows mechanical shakers to produce a shock pulse that accurately recreates the same shock response spectrum as from the pyrotechnic explosion. Also, where design changes are made to a structure, the components on that structure might not be able to be subjected to more shock than in the previous version of the structure.
Here, a shock response spectrum of the new version can be compared to the old one, to pre-test the structure. 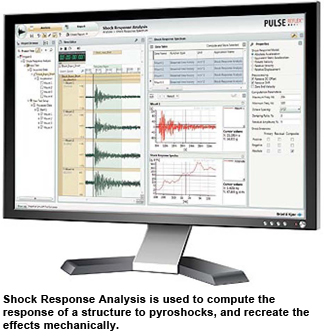 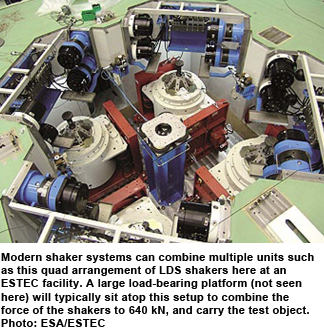 The Company’s Mission is to help our customers measure and manage the quality of sound and vibration in their products and in the environment. Their corporation vision is to be the first choice and long-term business partner, delivering innovative technical solutions which create sustainable value for our customers, delivering advanced technological solutions and products of renowned quality. These cover the entire sound and vibration measurement chain from a single transducer to a complete turnkey system.

The product portfolio covers all of the components and tools required in the measurement and analysis of sound and vibration. It is unique in the industry that all components can be sourced from a single company. Products fit together intelligently as systems, simplifying the process of creating systems optimised to solve specific customer issues. A full range of services for products and systems, including installation, training, support, software updates, calibration, planned maintenance, repair, and rental, are offered.