Commercial X-band, a frequency reserved entirely for U.S. and Allied Governments’ use, has multiple technical advantages which make it a solid contender in any bandwidth selection process. The benefits of commercial X-band are, in many cases, the same, or better, than those being touted in the Ku- vs. Ka- debates. Hence, it is imperative that government end users and solutions providers alike do not overlook the value of commercial X-band for their bandwidth needs. 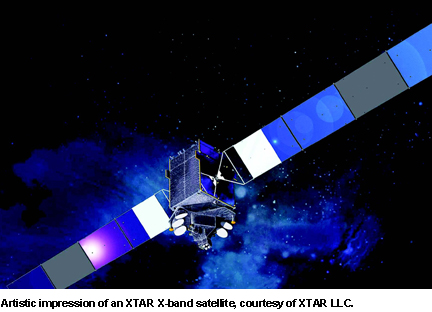 Choosing the correct frequency is a process of matching requirements to capabilities: What size antenna do I need? What is the strength of its throughput and will it meet my requirement? Who makes the equipment? At what cost and how quickly can I get the equipment? Will I lose signal when it rains? Is the coverage available where I need it, and when I need it?

There are several technical and operational reasons to justify X-band over other frequencies. Successfully used for military communications for decades, commercial X-band outperforms other frequencies in the most demanding scenarios. Advanced technological capabilities include:

– Freedom from the clutter of commercial users: X-band may not completely prevent the chances of interference. However if remedial action is called for, such as requiring users to turn off their transmission to identify the interference source, the process is simpler and faster with the smaller, government-only X-band user pool, compared to the far larger Ku-band user community.

– Rain-fade resistance: Rain fade is mainly an issue for frequency bands above 10 GHz. X-band operates at 7-8 GHz. It not only performs better than Ku- and Ka-bands under adverse weather conditions, it also often outperforms C-band, which may suffer from adjacent satellite interference.

– Maximized throughput: Commercial X-band matches or exceeds all other frequency bands in throughput on same-sized antennas, and with little impact from rain fade regardless of rain zone.

– Excellent for mobility applications: Spaced at 4 degrees apart rather than the traditional 2 degree for Ku-band, commercial X-band performs with higher-power and smaller remote antennas (<1m) which are ideally suited for mobile applications.

– Existing legacy X-band equipment and experienced users: Limited cost and training required for most military units which often already have the terminals and experience to use X-band.

As warfighter missions become more mobile, the X-band advantages cited above will come to play a pivotal role in helping achieve mission success. The size, weight and power of the warfighter’s equipment is gaining increasing importance, and this includes smaller terminals which provide greater flexibility and agility in all circumstances.

Commercial X-band offers an attractive alternative to commercial Ku- and Ka-bands for transmitting to and from small terminals used for applications such Airborne ISR (AISR) and manpacks. The main advantages include providing greater spectral efficiency, lower chance for interference, and less rain fade and greater satellite separation.

X-band frequencies (7.9 to 8.4GHz transmit and 7.25 to 7.75GHz receive) operate in a range (below 10GHz) that is not as susceptible to rain-fade signal degradation as are the Ku- and Ka-bands. This can result in significant savings in bandwidth and allow higher throughputs from small terminals.

Such bandwidth efficiency is just one advantage to X-band. Satellite interference using X-band occurs less often as X-band satellites are typically spaced at 4 degrees or greater, compared with 2 degrees (or less) at Ku- and Ka-bands. This greater spacing means significantly less chance of adjacent satellite interference. Consequently, X-band is ideal for the small antennas that are generally required for AISR and other mobile missions.

The cost value of commercial X-band for the government user has become more apparent in recent years as the availability of Ku-band continues to shrink. The Ku-band resource limitation has driven up costs and minimized the flexibility of this bandwidth. By comparison, commercial X-band has proven cost effective on a number of levels, including price per MHz, price per Mbps, and the limited capital cost for related equipment. Most importantly, its ability to enable systems and missions which offer the user enormous return on investment by increasing the likelihood of mission success, add significantly to the value of commercial X-band.

Reliability of service is a critical advantage of commercial X-band and extremely valuable to the user. XTAR bandwidth is guaranteed for the term of its lease, unlike the pre-emptibility of MILSATCOM resources. Every MILSATCOM user, outside of President Obama, risks being prioritized off mission-critical space segment because of other users assuming precedence. Warfighters whose missions depend on assured and non-preemptible space segment when they need it, often turn to commercial X-band because of this guaranteed service provision.

Responsible users of commercial X-band can also earn the right to manage their space segment as necessary to meet their mission requirements. They can maintain anonymity by not being forced to disclose operational information such as terminal location. In this respect, they receive a greater freedom from oversight, constraints, and bureaucracy than they might when using MILSATCOM.

In a world which demands ever more bandwidth at maximum value, selecting the right frequency boils down to carefully assessing the specific requirements of an operation, technology or application. At present, commercial X-band is one of the most valuable assets in the warfighters’ frequency tool kit.

About the author
As the Vice President of Engineering, Mr. Chambers is responsible for managing XTAR’s satellite and terrestrial resources to support government missions as efficiently as possible. Additionally, he helps strategically plan for future capabilities to support XTAR’s growth and develops solutions to meet XTAR customers’ unique engineering requirements. Mr. Chambers came to XTAR from DRS Technical Services where he lead the engineering team responsible for the full life cycle of satellite, terrestrial and hybrid communication networks for military and other government customers. Previously he held several senior engineering positions with various satellite network providers designing and implementing both satellite and hybrid satellite/terrestrial communications networks. Mr. Chambers graduated from Pennsylvania State University with a Bachelor’s degree in Electrical Engineering. He also has a Master’s degree in Electrical Engineering from Johns Hopkins University.