RF links in military communication are ubiquitous, from just a single antenna used by mobile troops right up to the large satellite dish farms used for government monitoring. Tactical UHF/VHF radio links, communication buoys and secure network data centers all use RF links. However, the traditional copper cable link between the antenna and control station has significant performance limitations and is not secure. In contrast, optical fiber is lightweight, inherently secure and incurs negligible signal losses, bringing flexibility to the design of fixed installations and mobile applications. 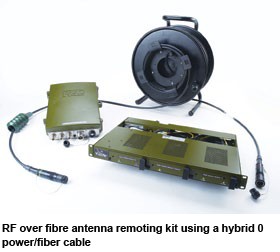 The Technology
In the majority of applications, optical fiber is used to carry digital signals. However, it can also be used to carry analogue signals such as the RF signals received and transmitted using satellite links. The technique uses intensity modulation which means transferring an electrical signal to the optical domain without any form of digitization. Consequently, the system is agnostic of the type of signal being transmitted and makes it suitable for almost any format. RF over fiber links are typically used to deliver services such as satellite L and C bands, GPS/MSF time signals, digital TV and VHF/UHF radio as well as cellular and mobile radio signals.

Copper Versus Fiber
Historically, the link between an antenna and a control station has been achieved using copper cable. However, copper is a poor performer at high frequency and cables with a relatively large diameter are required. Even with these bulky and costly cables, the link distance achievable is limited to a few hundred meters at best. In contrast, optical fiber is lightweight and capable of supporting very long link distances—even up to 50km.

Fiber cannot easily be tapped
Unlike copper cable, optical fiber is almost impossible to tap successfully and is therefore ideal for applications where security is paramount. A signal transmitted along a copper wire generates an electromagnetic field which can easily be “sniffed” using a simple current sensor. Signal propagation along optical fiber is based on the phenomenon of total internal reflection. Malicious access to the signal requires the glass fiber to be broken. Even if access to the signal were gained, the catastrophic effect on the signal level at the receiver is easily detected with a simple alarm function.

Protection from EMP and lightning strikes
As optical fiber is non-conducting, it is resilient to threats such as lightning or electromagnetic pulse (EMP) strikes. RF over fiber is used routinely in EMC testing, most notably in the aircraft industry, to help ensure accurate results and protect sensitive equipment.

Antenna Remoting
Mobile troops deploying radio antennas in operational environments are faced with the inherent conflict between the optimal placement of an antenna e.g. the top of a hill, and the choice of location for a forward operating base. Moreover, a transmitting antenna has a detectable electromagnetic signature. A short distance between the antenna and the operating base is a security compromise.

Copper cable will allow only for an antenna link of couple of hundred meters. The remoting distance may be increased by co-locating encrypted assets with the antenna however encrypted assets outside the tactical operating base is clearly a security compromise.

Using an RF over fiber link allows the antenna to be placed much further away without the need to co-locate encrypted assets outside the operating base. This improves security but also allows more optimal placing of the antenna. A well-placed antenna means a reduced electromagnetic signature due to the lower power required for transmission—a further improvement in security.

Security Improvements
Due to its inherently secure nature, potential for long link distances, plus resilience to electromagnetic radiation, RF over fiber delivers significant improvements in the security of information as well as personnel in fixed and mobile SATCOM applications.

About the author
Joe Petrie has more than 10 years of experience in the mobile communications sector with involvement in handset and infrastructure supplies. He possesses a BEng. in acoustics and electronics from Salford University, U.K. 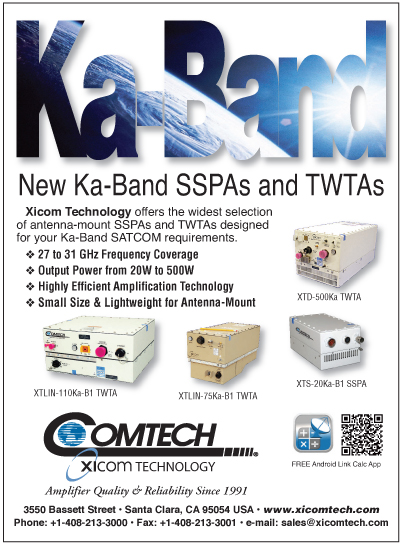