The military has a voracious appetite for communications. However, shrinking Department of Defense (DoD) budgets threaten to quash the military’s development and use of next-generation communications to support the warfighter.

This doesn’t have to be the case.

Take, for instance, the military’s widespread use of intelligence, surveillance and reconnaissance (ISR) missions and other full-motion, high-definition (HD) video feeds. These are the fastest-growing, bandwidth-consuming applications used by the warfighter.

One of the first, real-world applications of ISR missions was the cleanup effort for the Gulf Oil Spill. iGT and the industry were able to achieve return channel bandwidths to support HD video feeds. However, the military end-user missions demand more in the way of deliverables. The achievable data rates at the time of the spill were limited by the aperture of the antenna as well as the G/T and EIRP of the hemispherical beam of the satellite.

HTS networks now being launched have performance characteristics that will allow much greater data rate over a given aperture antenna. This provides excellent augmentation to the military’s current communications resources in support of ISR and other bandwidth-intensive uses.

A review of the MILSATCOM landscape reveals that budget constraints, the growing use of airborne Communications-On-The Move (COTM) systems, and the rapidly changing profile of end-users’ data, make the new HTS networks well suited for the military’s needs to fully support mission coverage. 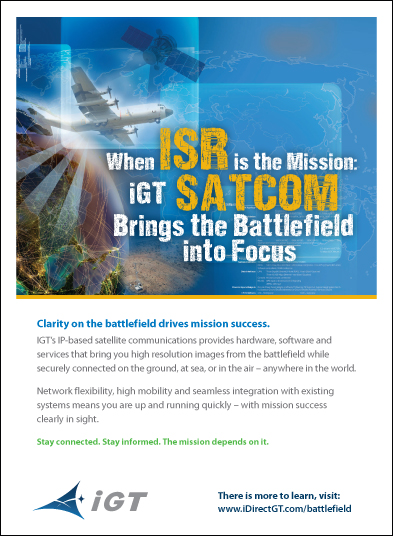 The overlapping spot beams and the consistent transmission profile make HTS a perfect communications solution for airborne COTM. HTS supports Ka-band, and although Ka-band is in the commercial portion of the band in HTS systems, the band enables the military to leverage some commonality of antenna and transmission equipment used on WGS Ka systems.

Although HTS brings considerable opportunity, it comes with its own set of challenges for the military user. One challenge is how to construct a system that will seamlessly transition between a government-owned and operated network using WGS Ka bandwidth and a commercial HTS spot beam system. Devising a modem that works in both types of networks, and has the all-important government Information Assurance (IA) and Transmission Security (TRANSEC) requirements, is essential for HTS operation.

The design of commercial HTS systems relies almost exclusively on proprietary waveforms—the DoD is moving toward a standards-based platform. A modem with sufficient memory would be capable of supporting multiple operational images.

One proposed solution would be to develop a Ka Block up Converter (BUC) with two Local Oscillators (LO). A communication mechanism would be required between the modem and BUC to implement the LO change.

Other considerations that need to be addressed before HTS networks can be used to augment satellite bandwidth include the need for commercial satellite providers to provide a secure enclave within their teleports. Ultimately, the landed traffic will need to be transported to a secure terrestrial network—the commercial satellite provider will have to meet stringent government requirements, such as Mission Assurance Category (MAC) II or even MAC I. A commercial provider’s teleport infrastructure will be subject to the same stringent IA requirements, including Security Content Automation Protocol hardening as government teleports. Finally, a TRANSEC-enabled network may be required for some missions.

The advantages of using the new HTS global networks as either a primary or secondary choice to meet government mission needs cannot be overstated. The architecture of the new satellite constellations provides remarkable amounts of satellite capacity with beam characteristics that make the technology perfectly suited to support the newest high data rate applications.

The global reach and ubiquitous, “always on” coverage can augment any currently deployed government network. In the case of Ka HTS satellites, the rain fade disadvantages are being mitigated with new technologies, such as seamless geographic hub redundancy that addresses hub side rain fade as well as improvements regarding in-route spectral efficacies by incorporating adaptive in-bound channels. Leveraging a shared infrastructure and tapping into such a fast-growing bandwidth pool will make using HTS a most cost-effective method whereby mission requirements can be successfully met in the years to come.

Whether it is access to high-speed Internet, streaming reconnaissance video or other communications needs, the launch of high-performance satellites, and, more specifically, the development of diverse remote terminals that are designed with end-users in mind, will bring these communications capabilities to reality for the DoD.

These advances in the sky will enable our troops on the ground, in the air and at sea to capture mission success, no matter where in the world they may be located.