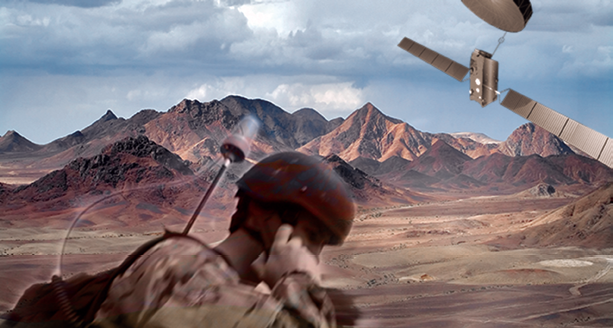 AWE17 was a non-secret experiment run jointly by UK MOD departments, DE&S (Defence Equipment & Support) and DSTL (Defence Science & Technology) and this concluded with a VIP presentation at Copehill Down Village near Warminster, Wiltshire, in the UK at the end of March of this year.

AWE17 was established as a forum to examine ways in which mature technologies available from industry could solve specific problems for the military. The process first identified potential solutions and then, after a progressive series of demonstrations, tests and trials, Spectra’s SlingShot® system emerged as one of those presented successful technologies following three rounds of selection.

With the ability to extend the secure net over thousands of miles using Inmarsat’s L-TAC™ satellite service, SlingShot can connect dismounted, mounted as well as air and seaborne personnel to one another and to operational and national headquarters. The flexible system was trialled in the Warfighting Experiment to demonstrate a solution that enables further communication capabilities with existing equipment.

A Game Changer
Recently referred to by a specialist user as “a game-changer,” SlingShot enables in-service VHF and UHF tactical radios to operate over commercial satellite communications (COMSATCOM) networks for robust, reliable and cost-effective Beyond Line of Sight (BLOS) Communications on the Move (COTM).

The aim of the final stage of the trials was to place the product into the hands of the user. British Infantry, Royal Marines and a squad from the U.S. Army participated in level C trials, which were comprised of training and section exercises on the Salisbury Plain and platoon exercises prior to the final company battle exercise. This entailed a company grouping being deployed for 72 hours in a tactical scenario against a peer enemy force. 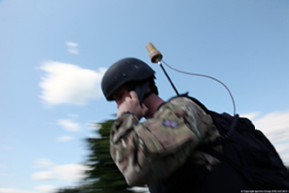 SlingShot is already deployed worldwide and has a proven track record for making a real difference as far as communications are concerned. As operations change and high-tempo, short duration, deployments become the norm, there is a real need to extend tactical communication distances, as the AWE17 requirements identified. SlingShot reached the final selection and will find increased use by British Forces.

Approximately 2,000 SlingShot units have been operationally deployed since the product’s launch in 2013 to key users, and more than 15 armies ranging from North America to Europe and Africa, the Middle East, to the Far East and Australia are SlingShot users. The maturity and efficacy of SlingShot have been recognized by the product’s selection in experiments such as AWE17 and the American Army Expeditionary Warrior Experiment (AEWE) as national defence organizations look to roll it out on a wider basis.

SWaP Crucial
When discussing communications — especially tactical communications — the compatibility of products with existing systems’ size, weight and power (SWaP) and, of course, security, have to be the overriding objectives.

When Spectra mapped out a development path for SlingShot, the company knew from the outset that success would be attained if the needs of the user community were kept in mind. The highest priority was to develop a system — in this case, available in manpack, vehicle, maritime and aviation versions — that was complementary and transparent to in-service equipment.

Real estate on mounted platforms is limited and dismounted troops face a real challenge if technology reduces the amount of ammunition, food and water that can be carried into force situations. For that reason, work on keeping the footprint to a minimum was challenging. The manpack system, which weighs under 2 kg, was eventually developed and is able to acquire power from in-service radio batteries, which frees the operator from carrying various battery types — other charging systems are also supported. Also introduced was a battery cassette as a further lightweight power option, making use of the ubiquitous AA battery.

The antennas that form the final part of the SlingShot system are all omni-directional, with robust BLOS and COTM capabilities. This gives the system several advantages over traditional UHF TacSat. On foot, there is no need to stop and orientate toward the satellite. The system can be used in prone or kneeling positions as well as when walking, jogging or running. As long as there is sight of the satellite, there will be service.

Another unique aspect of SlingShot is that the appliqué unit — which weighs close to 500 grams — is only a conduit for the radio signal, which can be encrypted or unencrypted as required by the user. This allows full security to be maintained as messages are conveyed between users or bases in locations around the globe.

Spectra’s expertise is in providing voice and data services in areas where either none exist, or where high-intensity conflicts, natural disasters, terrorist attacks or pandemics have destroyed existing networks. As the company is mainly staffed by ex-serving members of the Armed Forces, first-hand experience of the damaging effects when communication services fail brings real-life knowledge to product design and development. All know only too well the crucial importance of having viable communications services available at any time and in any location to the Armed Forces.

The requirements of the modern war fighter are catered to with care. The nature of conflict has changed and so have the information needs of all involved, from the commander directly through to the frontline soldier. With this in mind, Spectra has invested in providing the communications capability at the tactical level in order that critical data can be sent and received in a timely and appropriate manner to save lives and shorten missions.
www.spectra-group.co.uk

Simon Davies is the CEO of Spectra Group (UK) Ltd. Spectra is a leading provider of Voice and Data services into remote and hostile areas world-wide for defence, governmental and non-governmental sectors.

Upon leaving the Military in 2004, Simon established Spectra, which has achieved steady growth over the past 13 years through these difficult security and economic times and is fast becoming a leading service provider of reliable, robust, deployable communications. Spectra’s services are deployed worldwide in some of the harshest environments supporting the UK Military and European Union, Stabilization Unit to name but a few.