Hosted payloads (HPs) are unique and highly viable solutions that address shortfalls in civil and military agency capabilities. They could be especially important given tight government budgets but continued mission-critical requirements across the globe. Although the industry is largely in agreement that little has and will likely take place in the short term in the form of HP deployments, it is certainly not faltering as a viable market proposition over the long term. It is thus useful to examine the HP business case for key market segments and the benefits to the satellite operator, satellite manufacturer and hosted payload client over the medium to long term. Information from the analysis below is extracted from NSR’s industry leading research report, Hosted Payloads on Commercial Satellites, 2nd Edition. 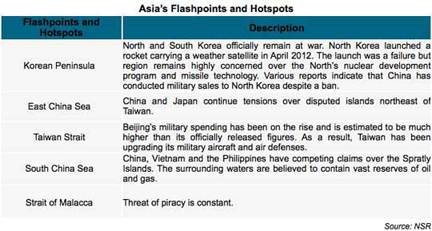 The Military Case
In past, present and future military activities, the commercial satellite industry was, is and will continue to be a key player in addressing strategic planning for current and future applications for a variety of mission requirements. Leasing of satellite bandwidth has been the most popular and most prominent option governments have used to date. Over time, however, as governments are required to continue and increasingly engagement via tactical and ISR (intelligence, surveillance & reconnaissance) missions, while at the same time working under heavy budget constraints, more creative, cost-effective and quickly deployable arrangements have to be undertaken.

The U.S. Military alone is projected to demand some at least 40-50 Gbps of satellite capacity by 2020. The figure does not include demand by the intelligence community such as the CIA, which is a large user of bandwidth for its own ISR mission requirements, further exacerbating the bandwidth capacity crunch that has been characteristic over the past decade.

Moreover, despite the financial issues that have plagued the global economy, growing concerns over key flashpoints and potential hotspots are leading to a burgeoning arms race in regions such as Asia. Large, wealthy but over-extended countries as well as small, cash-strapped nations are looking for ways to build capabilities quickly and cost-effectively. Hosted payloads present large, wealthy countries with options to quickly deploy assets, while cash-strapped nations can exercise the arrangement to achieve some kind of parity with large nations on space-based capabilities.

Citing Asia once again, its many hotspots may be the impetus that could drive the hosted payload arrangement. The focus on military activities has largely been concentrated on Iraq and Afghanistan over the past decade and these activities are likely to continue, albeit at lower levels via training of the local police and military units as well as other key missions that include ISR. 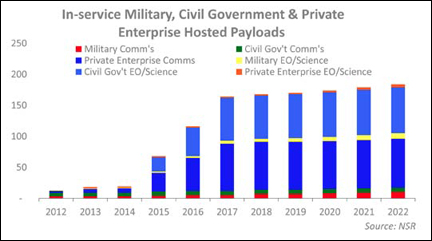 However, as U.S. and Allied engagement draws to a close in terms of troop presence, the new focus is headed towards the largest region of the globe via the U.S. Department of Defense’s “Pivot Strategy towards Asia.” Indeed, some satellite operators have indicated to NSR that the shift in terms of demand has already begun.

Moreover, various reports indicate that China’s growing military spending is towards developing an aircraft carrier, a stealth fighter jet, and missiles that can shoot down satellites. 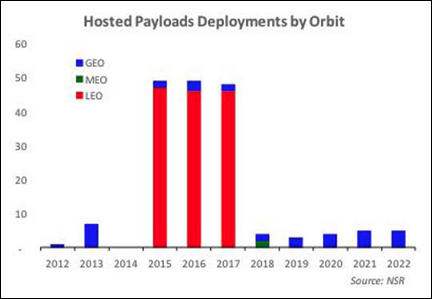 As countries in the region cannot match or outspend China in military hardware including space-based capabilities, hosted payloads should provide or become an increasingly attractive option to narrow the gap. As the partnership between governments and the commercial satellite industry becomes stronger, hosted payloads will likely become a growing option by which governments take advantage of more long-term arrangements that help buffer China’s build-up.

In addition, in deploying planned proprietary assets for next-generation technologies, hosted payloads once again provide a platform to test new systems in the environment the instrument is intended to operate in as well as save on costs as the instrument is not launched on a dedicated satellite platform.

This has been exercised by the U.S. Military via the CHIRP payload aboard an SES spacecraft, and many in the industry indicated that the results of the experiment have been quite favorable, which could result in a CHIRP2 program. Thus, the case for the military is the following:

The Civil Agency Case
To date, civil agency hosted payload demand has been driven by communications, specifically the WAAS and EGNOS systems. Over time, agencies such as the U.S. Federal Aviation Administration (FAA) are expected to continue to improve communications capabilities for transportation systems such that hosted payloads should continue to be deployed as replenishments as well as new programs to enhance current capabilities. Indeed, Iridium indicated that it expects a major hosted payload agreement with global air traffic control agencies including the FAA and similar agencies around the globe.

Apart from the aviation sector, contributions by other agencies are expected as well. These include NASA and NOAA (among others) that are involved in scientific research as well as addressing the climate change agenda that is part of long term, multi-faceted requirements. Indeed, it was announced in April that a yet-unselected commercial telecommunications satellite to be built by Space Systems/Loral will carry a NASA laser-optical communications terminal as a hosted payload in 2016 under an agreement with NASA’s Goddard Space Flight Center. This will be the first hosted payload from NASA; however, the agency indicated that around 70 instruments are currently in inventory looking for a ride. As such, NSR projects that Civil Government EO/Science hosted instruments will account for a relatively large number of deployments and in-service units over the forecast period.

Much like military needs, civil missions are inter-related globally but face serious budgetary challenges. In NSR’s view, civil requirements could take a multinational program/access regime where three key features could be part of a hosted payload arrangement that include:

Thus, the case for the civil government is the following: 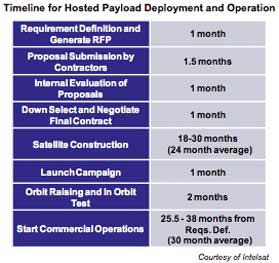 The Private Enterprise Case
Cost and capacity sharing is thus far the model followed by private enterprise, exemplified by the XTAR program. XTAR indicated from its founding in 2001 that XTAR’s business was designed around the hosted payload model. Launched in 2006, Spainsat is owned by Hisdesat, and it is on this platform that XTAR manages the XTAR-LANT payload of eight 72 MHz X-band transponders accessed through high-powered spot beams, three of which are fully steerable.

Another proposition has been offered by Harris/Caprock in terms of the company’s improvement of its competitive position. The company stated, “We’re looking for ideas and partners who can help us leapfrog the competition and drastically improve our competitive position in the marketplace. Hosted payloads would certainly be one option for achieving those goals.”

Finally, tapping future opportunities is another proposition that private enterprise can justify in deploying hosted payloads. In the Iridium example on the FAA system, the company indicated that it would develop the air traffic monitoring instruments then integrate the system onto the Iridium Next satellites. Iridium would then receive annual service revenue from a consortium made up of the FAA and other customers around the globe. In this model, the traditional hosted payload model where hosting fees are paid to the host does not apply. Rather, Iridium would be the service provider, and the consortium that includes the FAA would pay for the service.

The risk is a calculated one since there is a definite requirement. Over the long term, the FAA requires an automatic dependent surveillance broadcast (ADS-B) system for its next-generation transportation system. By 2020 the FAA will ensure that all U.S. aircraft are equipped with ADS-B hardware. 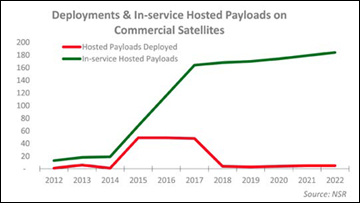 In NSR’s projections, hosted instruments on LEO orbits that specifically reflect deployments on Iridium NEXT far outnumber deployments in GEO and MEO systems. It is important to note, however, that the window of opportunity is fairly limited, driven by the launch schedule of Iridium NEXT to take place from 2015-2017. Thus, the case for civil government is the following:

Market Issues
Despite strong cases in all market segments, a number of key issues have and will continue to impact the hosted payload market. These include among others: 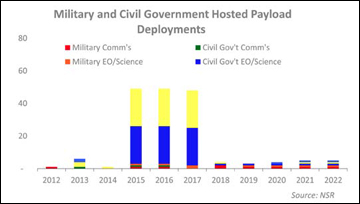 Moreover, wider risk management issues negatively affect the market. On the client side, instances where the Galaxy 15 satellite carrying the WAAS payload suffered a glitch in April 2010 as well as an Orbcomm satellite (which carried a U.S. Coast Guard Demonstration satellite for Automatic Identification System (AIS) was lost in August 2009) may have affected the market in the following manner:

On the host side, risks in a hosted payload arrangement could lead to:

Market Prospects
Taking market issues and each case for specific customer segments into account, NSR in its latest market research study, Hosted Payloads on Commercial Satellites, 2nd Edition, found that the market will become more fully developed over the next 10 years where it has been fairly limited as an option exercised by governments during the past decade.  From 13 hosted payloads in 2012, the market is expected to grow to over 180 in-service payloads by the end of 2022. Significant factors in this growth are the instruments aboard the Iridium NEXT constellation. 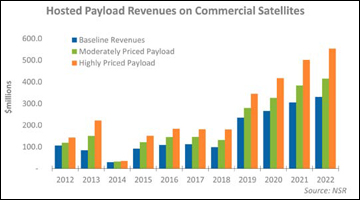 In terms of deployments per mission, civil government and private enterprise are expected to dominate the number of instruments deployed on commercial satellites. It should be noted that the deployments reflect systems aboard the Iridium NEXT constellation, which can carry small instruments on each satellite.

In terms of revenues, however, military communications missions are expected to drive revenue streams for the entire hosted payload market. Historically, the level of procurement has been high in dollar terms, particularly the Australian Defense Force (ADF) contract that carried a $167 million price tag. The recent ADF 2012 launch is likely at the same level as its 2003 predecessor in dollar terms. Over time, more military programs similar to the ADF are expected to emerge.

Globally, from an estimated $106.2 million in 2012, revenues for payload equipment, engineering services and commercial satellite operator hosting services are expected to range from $330.8 million to $554.0 million by 2022, yielding cumulative revenues of $1.8 billion to $2.9 billion over an 11-year period. The range of revenue streams depends largely on the types and varying costs of hosted payload equipment, and here, NSR conducted a scenario-based approach in its forecast methodology to reflect various payload complexities. 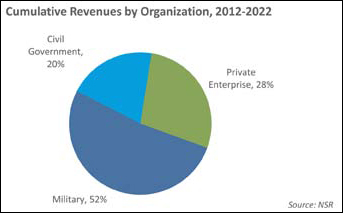 The revenue flows, when taken from a cumulative perspective, do suggest increased streams and thus opportunities in this given market. The specific annual revenue flows could be erratic; however, the overall trend of market opportunity is expected to increase within the forecast period.

Although long procurement processes are expected largely due to the inherently complex hosted payload arrangements as well as associated fiscal and budget issues, the hosted payload proposition as a feasible capability-boosting instrument is expected to be exercised by a host of countries over the mid to long term. A sustainable and viable business model has emerged exemplified by the Australian program whereby risks associated with hosting complex military instruments can be justified by commercial operators with the right compensation arrangements and risk-mitigating safeguards. 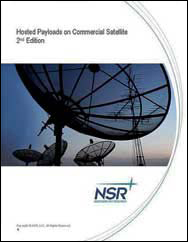 It should be noted that key market issues have to be resolved for the market to fully develop. It should be noted as well that in terms of revenue impact, hosted payloads are a niche offering where the percentage of market value is less than 1% of the entire satellite industry.

Editor’s Note
This article is an excerpt from a new NSR report entitled Hosted Payloads on Commercial Satellites, 2nd Edition. Complete information can be found at www.nsr.com

Mr. del Rosario covers the Asia Pacific region and is a senior member of the consulting team where he focuses his research on quantitative modeling, data verification, and market forecasting for the wireless industry and satellite communications sector. He conducts ongoing research with specialization in policy analysis, regional economic indicators, regulatory initiatives and end user demand trends. 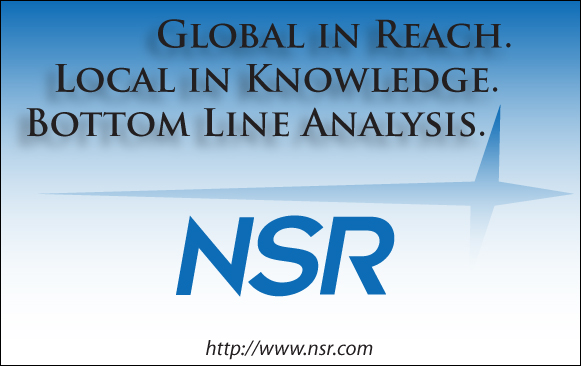