A classified launch on April 10th was successful and also created a great deal of speculation as to the purpose of the mission and the satellite’s resulting orbit...

United Launch Alliance (ULA) successfully launched their second mission in just seven days with the liftoff of their Atlas V rocket carrying a payload for the National Reconnaissance Office.

The rocket launch had been initially delayed last month after ULA stated that an issue had developed with a range asset that was needed to support the launch.

Space Launch Complex 41 at Cape Canaveral Air Force Station is a former Titan launch pad and is now the east coast home for the Atlas V. Constructed during the 1960s, the pad has previously been used by Titan IIIC, IIIE and Titan IV rockets. ULA reported no technical problems. Weather was 90 percent favorable for the launch.

The mission of the NROL-67 payload is classified. While this has never stopped observers from identifying most NRO spacecraft ahead of their launch, this marks the first use by the NRO of an Atlas V 541 rocket, an indication that this is likely a new payload class. As such, the spacecraft is much harder to identify as there are no similar launches for comparison purposes.

Notices to airmen (NOTAMS) and hazard areas published ahead of the launch revealed that the rocket would launch to the East, over the Atlantic Ocean, into a low-inclination orbit. Such a trajectory means that the payload is almost certainly bound for a geosynchronous orbit, as other equatorial regimes are of little value for reconnaissance and intelligence gathering.

NROL-67 was, at one point, also believed to have been slated for a west coast launch, however, a launch from Vandenberg AFB in California would have been incapable of reaching a geosynchronous orbit.

The true nature of NROL-67 will be difficult to ascertain until the satellite has been sighted in orbit and observed over a period of several months.

A team of amateur observers keep track of classified satellites, posting data on such satellites’ locations and orbits online. The most likely explanation is that this new satellite is the long overdue replacement for the Mercury satellites. However, this still leaves many questions unanswered.

The use of the more powerful Atlas V 541 for NROL-67 means that this payload is unlikely to be related to the Satellite Data System; however, it is still possible that it could be a newer and larger satellite, two spacecraft launching together, or a satellite being placed directly into geostationary orbit, rather than the transfer orbit usually used for such missions.

The Atlas V used for the NROL-67 mission was AV-045. The forty-sixth Atlas V to fly, this was the second launch vehicle to use the 541 configuration, which makes use of a payload fairing with a diameter of five meters, four solid rocket motors and a Centaur upper stage with a single engine. This configuration has flown just once before; when it sent the Curiosity rover on its way to Mars in November of 2011.

The first stage of the Atlas is a Common Core Booster, powered by a single RD-180 engine derived from the RD-170 series that was developed in the Soviet Union for the Zenit and Energia rockets.

The twin-chamber RD-180 is fueled by RP-1 propellant and liquid oxygen. Four of a maximum five Aerojet Solid Rocket Motors (SRMs) were used to augment the CCB’s thrust at liftoff on Thursday’s mission.

The second stage, the Centaur, is powered by an RL10A-4-2 engine burning liquid hydrogen and liquid oxygen. During the early stages of flight, the second stage is encapsulated with the payload inside the fairing. 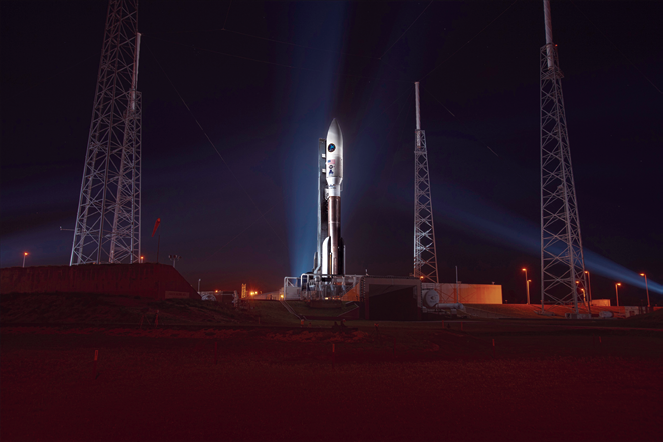 Atlas V configurations with more than three solid rocket motors require the use of a five meter fairing, as opposed to the four meter fairing which leaves the Centaur exposed, as the upper stage would not be able to withstand the loads imparted by the additional boosters. As such, its use does not necessarily mean that NROL-67 is too large to fit within a four meter fairing, such as the smaller Trumpet SIGINT satellites that operated in Molniya orbits.

AV-045’s flight plan was not announced. Events in the early stages were deemed to be similar to the Mars Science Laboratory launch, with RD-180 ignition occurring at T-2.7 seconds, with the solids joining them at T-0.

Around 11/10ths of a second later, the Atlas lifted off to begin its ascent. Roll, pitch and yaw maneuvers began at around T+5.2 seconds to attain the necessary attitude to achieve its target orbit. However, the early flight was close to vertical as AV-045 climbed out of the atmosphere to reach an altitude at which fairing separation can safely occur. The solid motors burned for around 85 to 90 seconds before they separated into pairs approximately 27 seconds later.

Fairing separation came around the three and a half minute mark, with the forward load reactor being jettisoned from the nose of the Centaur shortly afterwards. The load reactor is a device used to dampen vibrations within the fairing while it is attached, preventing acoustic damage to the satellite.

Direct insertion into geostationary orbit would require a three-burn profile, while a transfer orbit could be reached in two or three burns depending on mission requirements. The three-burn profile has been favored for past NRO SIGINT launches, and is also used on some of Russia’s Proton launches. By contrast, the majority of geosynchronous launches use a transfer orbit, and that approach has been used in the past for the NRO’s Quasar satellites.

For a typical mission to place a satellite directly into geostationary orbit, the Centaur would make an initial burn lasting around eight and a half minutes. After coasting for nine and a half minutes, the stage would restart and burn for about 265 seconds to reach its transfer orbit.

The Centaur would then begin rolling to maintain thermal control during its extended coast phase. After five hours and seven and a half

minutes of coasting, the RL10 would restart for a further two minutes to place the payload into its target orbit with spacecraft separation occurring about two and a half minutes later.

The mission patch for NROL-67 depicts the winged horse Pegasus above the Earth, with the words “in scientia opportunitas” which translate to “In knowledge there is opportunity”. The launch patch for NROL-67 depicts a dragon set against clouds and a full moon. The motto reads “forest fortuna adiuvat”, an unusual variant spelling of “fortes fortuna adiuvat”; “fortune favors the bold”. 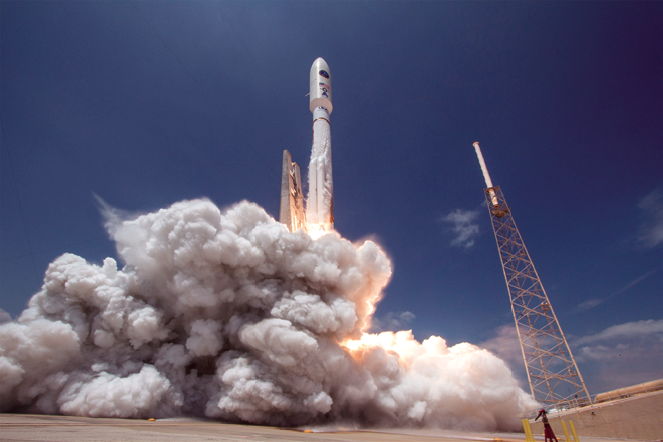 A ULA Delta V lifts off from Cape Canaveral with the NROL-67 payload. Photo is courtesy of United Launch Alliance.

Significantly, the depiction of the Earth prominently shows Europe, rather than North America, like most U.S. military patches. This may indicate the satellite positioning in geostationary orbit.

The dragon has long been a symbol associated with the NRO’s signals intelligence missions. The suggestion has been made that the dragon’s presence on a patch, which is traditionally designed by the launch team, rather than the payload team as in the current cases, may simply be coincidence—symbols have in the past been seen on launch patches as well as the more prominent payload patches.

NROL-67’s patches have not been circulated as widely as those from previous missions, presumably as a result of the media backlash against the patch that was issued for the NROL-39 mission last December. Coming at a time of widespread contempt for U.S. intelligence agencies, the patch—which depicted an octopus wrapping its tentacles around the world and the words “nothing is beyond our reach”—was considered to be in bad taste.

The NRO has had two or three principal constellations of spacecraft in geosynchronous orbit, each fulfilling different purposes. The Quasar or Satellite Data System (SDS) spacecraft are used to provide communications between lower-orbit reconnaissance satellites and ground stations. Three generations of SDS satellites have been launched since 1976.

The first-generation SDS constellation consisted solely of satellites in Molniya orbits; inclined elliptical trajectories which keep the satellites over high latitudes for long periods of time.

The second generation introduced a geostationary component—USA-67 was launched aboard Space Shuttle Atlantis during the STS-38 mission, along with Prowler; a one-off mission whose existence has never been officially acknowledged.

More geosynchronous satellites were introduced in the third-generation system; two spacecraft were launched to geostationary orbit at the start of the 2000s, with replacements launching in 2011 and 2012.

Quasar launches during the EELV era have made use of Atlas V 401 and Delta IV Medium+(4,2) rockets.

The remainder of the NRO’s geostationary fleet is used for signals intelligence (SIGINT) of one form or another. 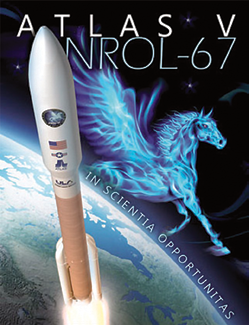 Orion satellites, formerly known as Magnum, are believed to be used to intercept and eavesdrop on communications, while the Mercury series pinpoints radar signals, although some reports reverse the assumed missions of these two series.

Another suggestion has been that the Mercury series is used to collect data from communications while Orion intercepts telemetry data from foreign missiles.

The most recent mission, June 2012’s NROL-15, featured modifications to the Delta IV, already the most powerful rocket in America’s launch fleet, to increase its payload capacity. These were rumored to be required due to the mass of the satellite.

In light of this, NROL-67 seems too small to be a part of this series, unless new technologies have enabled significant mass reductions over the earlier vehicles.

It is not known whether the Orion satellites launched in recent years carried any modifications as a result of this program or whether it was abandoned. However, there has been no sign of a new satellite taking on this combined role.

It is also possible that NROL-67 could be unrelated to the main geostationary constellations; instead, the satellite could be a one-off mission or even the start of a completely new NRO series.

Documents leaked to the Washington Post last year by Edward Snowden hinted at a signals intelligence satellite named
“Nemesis 2,” which received half a billion dollars of funding during the 2011 financial year. No spacecraft could be identified as either Nemesis 2 or its presumed predecessor Nemesis 1. One possible, though conjectural, explanation is that Nemesis 1 may have been the Prowler satellite launched in November of 1990 via the Shuttle Atlantis, with a follow-up launched many years later.

One other Atlas V 541 launch for the NRO, that being NROL-42, is scheduled to liftoff from Vandenberg AFB no earlier than 2017. 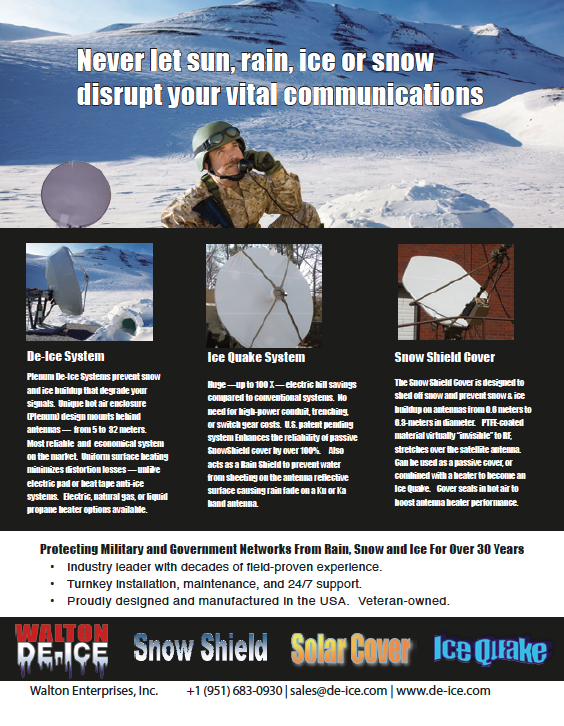