The following article was prepared by the Radio Technical Commission for Maritime Services (RTCM—www.rtcm.org/) for publication at the National Marine Electronics Association (NMEA — www.nmea.org/) infosite. 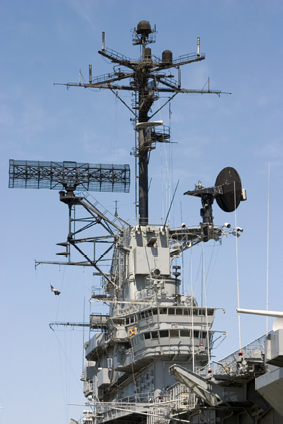 Captain John Fuechsel, USCG, retired, has made significant contributions toward maritime safety throughout his long and distinguished career. He leads the GMDSS Task Force, which has thousands of members seeking to improve safety via more effective use of communications/electronic systems.

Origins of the Task Force
In 1993, the Coast Guard organized the Global Maritime Distress and Safety System (GMDSS) Task Force to help prepare the private sector for the new GMDSS recently adopted by the International Maritime Organization (IMO).

Initially, the main thrust was to prepare commercial vessels for their part in outfitting for the new system. Commercial vessels over 300 tons were subject to the new carriage and training Rules under an amendment to the Safety Of Life At Sea (SOLAS) Treaty which came into force in 1999.

The Task Force makes recommendations to government regulatory authorities to improve safety and minimize false alerts. Task Force members serve as advisors to government delegations to the IMO and the international telecommunications Union (ITU). U.S. Coast Guard funding supports efforts by the task force and travel expenses for leadership of the IMO’s correspondence group on modernization of the GMDSS.

The GMDSS Concept
The IMO wanted to modernize the Distress and Safety systems to take advantage of the emerging maritime satellite systems and the ITU was ready to cooperate with the necessary changes to the Radio Regulations and supporting spectrum allocations.

The basic system of manual Morse telegraphy on 500 kHz was little changed since the days of the TITANIC, and ships were agitating for higher throughput. New Emergency Position Indicating Radio Beacons (EPIRBs) had revolutionized distress alerting, and the time was ripe for a complete overhaul of the system.

The result was creation of sea areas based on distance from the coast, A1 for VHF coverage, A2 for MF coverage, A3 for Inmarsat coverage and A4 for the polar regions. Ships in A3 could elect either HF or Inmarsat, but HF was the only choice for A4.

All ships would be required to watch distress channels in A1, A2 and A3 and receive NAVTEX and SafetyNET Marine Safety Information (MSI) broadcasts. Carriage of automatic, float free, self-activating EPIRBs was required.

English was selected as the common language for all safety communications. Finally, after much controversy, it was decided that Deck Watch officers would maintain the watches on voice 24x7 and that carrying Radio Officers would be optional.

Task Force Membership and Meetings
Membership is open to any interested party with an email address. There is no charge for participation.

Meetings are held twice a year at the RTCM headquarters in Arlington, Virginia and once a year during each of the NMEA and RTCM annual meetings. Members unable to attend may participate by conference call and email. Summary records of the meetings are distributed to all members by email as Newsletters.

Task Force Takes On Expanded Terms of Reference
Gradually, the Task Force broadened its attention to include small commercial vessels, some of which were regulated, and recreational vessels that were virtually unregulated, as least as far as radio systems are concerned. Both groups use some of the new GMDSS radio systems.

By 2005,  the U.S. Coast Guard passed sponsorship of the Task Force to the Radio Technical Commission for Radio Services (RTCM), a non-profit Standards writing group for maritime telecommunications.

Service Agents and Manufacturers Group
Issues dealing with GMDSS equipment and interfaces to navigation receivers. Servicing Agents have assisted the Task Force efforts to enable navigation receivers to be connected to DSC radios. In general this group deals with most issues of interest to NMEA members.

Commercial Vessels Group
Issues dealing with commercial vessels, including especially those below SOLAS tonnage for which regulations are a national issue.  This group develops check lists for various periodic inspections and recently formulated regulatory proposals to the U.S. Coast Guard and FCC regarding Fishing Vessels and small Passenger Vessels.

Training Group
Issues dealing with training of Deck Officers, Radio Operators and equipment maintainers. This Group wrote the Exam Questions for the qualifying exams and has upgraded the questions as necessary. The Training Group is trying to improve the qualifications for GMDSS Maintainers beyond just passing the required multiple-choice exam. Another issue this Group advocates is requiring periodic recertification of GMDSS Operator Licenses that are currently issued for life of the holder.

GMDSS Modernization Group
This is a temporary group established to aid in the IMO’s effort to modernize the GMDSS. Even though the changes seem minor at this point, the cumbersome IMO procedures will ensure several more years of activity and review. One major new initiative is the expected acceptance of the Iridium Satellite System as an official GMDSS system.

Other ongoing management issues include efforts to better manage the MMSI numbers used for identification in Digital Selective Calling (DSC) radios and Automatic Identification System (AIS) units and how to deal with the fact that a sizeable percentage of recreational vessels use DSC radios but don’t bother to register for an MMSI number or connect a GPS receiver.

Use of smart cell phones in lieu of VHF has progressed to the point that the coast guard receives most of their short-range alerts by cell phone but at least the smart phones provide a position. A new initiative is how best to recommend proper Cybersecurity fundamentals for various sectors of the maritime community.