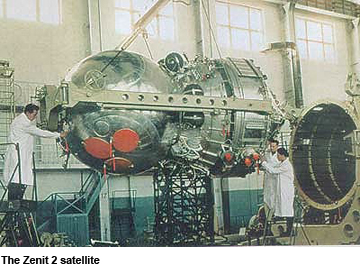 Similar to the United States, the former Union of Socialist Soviet Republics recognized the value of military reconnaissance satellites early in their development of spaceflight. In doing so, the USSR took a standard spacebus that was being developed for its manned program and fitted craft with specialized equipment. As is the case with U.S military programs, details of the USSR/Russian programs are classified and the minimal of information that is known is mostly gathered by western observers. To add to the secrecy, the USSR/Russian photo reconnaissance satellites are included in the ‘all-purpose’ Kosmos series of satellites which began in 1962 and had reached 2,481 in number by the close of August 2012.

Zenit
The Zenit series of photo reconnaissance spacecraft was derived from a basic spacecraft design that also spawned the Vostok manned spacecraft and several other types of USSR satellites.

Designed by OKB-1 under the leadership of Sergei Korolov, the satellites consisted of a spherical re-entry module with a diameter of 2.30m and a mass of about 2400kg., which contained the specialized camera equipment, recovery beacons and parachutes. In orbit, this was attached to a service module containing batteries, electronic equipment and an orientation system as well as, on a later version, a liquid fueled rocket engine that would slow the satellite down for re-entry prior to separation from its service module. The total length was around 5m and the mass was up to 6300kg. 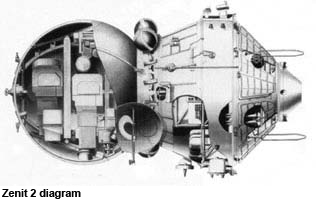 The combination of the basic spacecraft and equipment allowed a variety of configurations that could be tailored to a specific mission requirement—these included strategic and tactical reconnaissance as well as surveillance of predetermined targets. The spacecraft were also used for Earth resource missions and the observation of crops in an effort to verify the accurate reporting of crop yields by agricultural communities.

Zenit 2
The first version was Zenit 2 (there was no Zenit 1) and it carried an SA-10 camera, an SA-20 camera, a Kust 12M electronic intelligence gathering radio package as well as the Baikal photo-television device. Following the poor performance of the Baikal device, the Ftor-2P package was installed, which incorporated the camera equipment and provided 60x60km images with a resolution of 10 to 15m.

The typical life span of a mission was eight days, after which the re-entry module with the exposed film was recovered. Several versions of this satellite carried ancillary payloads for geomagnetic, radiation, meteorological, and biological experiments.

The Zenit 2M satellites were built by TsKB and were fitted with a Ftor-2R3 camera system. The mass was approximately 6300kg. and the typical mission duration was 12 days.

The spacecraft, which were also known as Gektor, were modified by the addition of a capsule for an ancillary payload. Identified as Nauka (science), this capsule had a diameter of 1.9m and a mass of 200kg. and was mounted on the forward end of the spherical reentry module. The spacecraft had a basic mass of 5900kg. and a length of 5.9m.

The Zenit 4 version was based on the Soyuz spacecraft, itself a development of the Vostok spacecraft. Designed by OKB-1, the Zenit 4 had a mass of 6300kg. and a length of approximately 5m. The satellites were equipped with the Ftor-4 camera system, providing high resolution imagery. It also had a manoeuvring engine that allowed the orbit to be altered. Some of the satellites also carried ancillary payloads for scientific purposes. The typical life span of a mission was eight days, after which the reentry module with the exposed film was recovered.

The Zenit 4M was a further development of the Zenit 4 and was equipped with the Ftor-6 high resolution camera system. The typical mission duration was 14 days and it is understood some satellites were equipped with film return capsules as well as ancillary payloads. This version has also been referred to as Rotor. 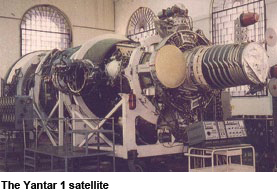 A further modification with a modernised high resolution camera, led to the Zenit 4MK, also known as Germes.

The Zenit 4MKT version, also known as Fram, carried the Priroda 3 Earth resources camera system which took multi-spectral photographs on black and white and spectro-zonal film with a resolution of 20 to 30m.

The Zenit 4MT version was optimized for topographical photography. The equipment consisted of the SA-106 topographic camera, a laser altimeter, and a doppler apparatus. The series was also know as Orion.

The Zenit 6 version, developed from the Zenit 4 version, was used for area observation as well as high resolution purposes. This version was also known as Argon.

The final Zenit version, Zenit 8, also known as Oblik, was for military cartographic photo surveillance while they also investigated natural resources of interest to the USSR national economy. 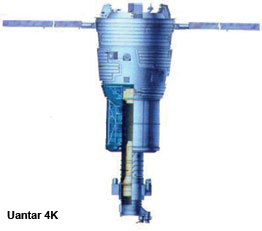 – The Agregatnyy Otsek (AO), an equipment module which included the manoeuvring engines
– The Pribornnyy Otsek (PO), an instrument module for attitude control and spacecraft housekeeping systems
– The Otsek Spetsial’noy Apparatury (OSA), a special apparatus module which was recoverable and carried the Zhemchug-4 camera with a resolution of 50 cm, the Salyut-3M onboard computer.

The spacecraft also carried two 75kg. descent capsules, Spuskayemaya Kapsula (SpK), which were used to return film to Earth before the end of the mission. The usual mission duration was 30 days. Spacecraft were recovered following re-entry and it has been suggested that they were used again for subsequent missions. Similar to the earlier Zenit, the spacecraft came in various versions.

The Yantar 2K version was also referred to as Feniks and the 6600kg. satellites incorporated the Zhemchug-4 photographic equipment.

The Yantar 4K1 version, also known as Oktant, had a mission duration of 45 days and carried a Zhemchug-18 camera.

The next version was the Yantar 4K2 also known as Kobalt. These were fitted with a Zhemchug-4 camera system and carried 22 film return capsules.

The Yantar 4KS1 version was also known as Terilen, which carried electronic imaging equipment and the data was transmitted to Earth via communications satellites in geostationary orbit. The operational lifetime of these satellites was 26 to 32 weeks.

The Yantar 4KS1M was a further development also known as Neman. These satellites had a mass of 7000kg. and were fitted with electro-optical equipment operating in the visible and infrared bands. The satellites used an initially retrievable capsule to return film and later data relay satellites to return CCD imagery rather than physically recovering film.

The Yantar 4KS2 version was a further development of the Yantar 4K2. Also known as Kobalt M, the satellite carried small film recovery capsules as well as a large re-entry vehicle. The Yantar 4KS2 seems to be the version that currently remains in service. 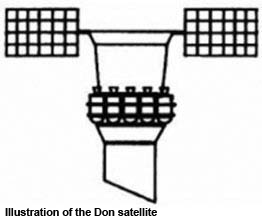 The Yantar-1KFT version referred to a mapping satellite and was not a military photo reconnaissance satellite, whereas the Yantar 6K and 6KS versions were high resolution spacecraft that were never built.

Don
Don, or Orlets, was a series of military reconnaissance satellites built by TsSKB. The 6530kg. satellites, which were probably based on the unbuilt Yantar 6 version, carried a panoramic camera and as many as 8 film return capsules. They were also fitted with a manoeuvring unit. Unlike other satellites of the Yantar basic design, these satellites were not recovered but were destroyed in orbit.

Eight satellites were launched between 18 July 1989 and 14 September 2006 and it is believed they are no longer operational.

The Yenisey series, also known as Orlets-2, was based on the Don series but carried up to 22 film return capsules. It is also likely that the satellites’ optics systems allowed them to take images at a higher resolution than that achieved by satellites of previous generations. The first of the series was launched on 26 August 1994 with a second launched on 25 September 2000. 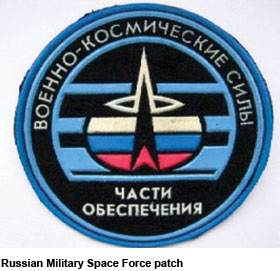 Arkon
The first launch of the Arkon or Araks military reconnaissance satellites occurred on 6 June 1997. Built by Lavochkin and with a mass of app. 6000kg., the satellite was fitted with a reflecting telescope system with a focal length of 27m, providing a resolution of 2 to 5m, depending on the orbit altitude. The satellite’s CCD sensor operated in 8 bands in the optical and near infrared region of the spectrum from 0.4-1.1 microns. The 30km swath width, combined with a capability of rolling at least 20 degrees, provided an observation path of 3000km in width. A second spacecraft was launched on 25 July 2002.

About the author
Jos Heyman is the Managing Director of Tiros Space Information, a Western Australian consultancy specializing in the dissemination of information on the scientific exploration and commercial application of space for use by educational as well as commercial organisations. An accountant by profession, Jos is the editor of the TSI News Bulletin and is also a regular contributor to the British Interplanetary Society’s Spaceflight journal. 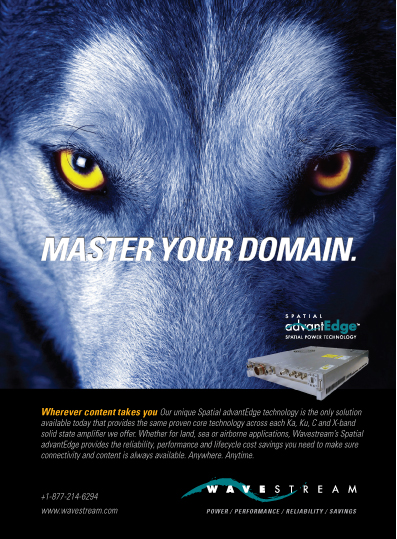