Recent technological advances have made the longstanding dream of on orbit robotic servicing of satellites a near-term possibility.

The potential advantages of that unprecedented capability are enormous. Instead of designing their satellites to accommodate the harsh reality that, once launched, their investments could never be repaired or upgraded, satellite owners could use robotic vehicles to physically inspect, assist, and modify their on-orbit assets. That could significantly lower construction and deployment costs while dramatically extending satellite utility, resilience, and reliability.

In fact, efforts to achieve the goal of on orbit servicing are already underway, including DARPA’s Robotic Servicing of Geosynchronous Satellite (RSGS) program, which focuses on services for satellites in geosynchronous orbit. 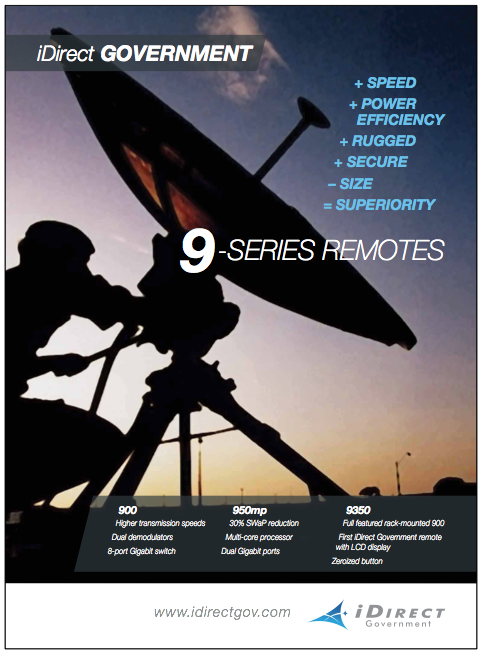 However, these efforts all face a major roadblock: the lack of clear, widely accepted technical and safety standards for responsible performance of on orbit activities involving commercial satellites.

This includes rendezvous and proximity operations (RPO) that don’t involve physical contact with satellites and robotic servicing operations that would.

Without these standards, the long-term sustainability of outer space operations is potentially at risk.

DARPA’s Consortium for Execution of Rendezvous and Servicing Operations (CONFERS) program aims to help overcome these challenges and provide the foundation for a new commercial repertoire of robust space-based capabilities.

CONFERS envisions a permanent, self-sustaining, and independent forum where industry could collaborate and engage with the U.S. Government about on-orbit servicing. This industry/government forum would be composed of experts from throughout the space community.

DARPA, primarily in partnership with NASA, will bring decades of operational experience from government missions to the consortium. Participants would leverage best practices from government and industry to research, develop, and publish non-binding, consensus-derived technical and safety standards that servicing providers and clients for on orbit servicing operations would adopt. 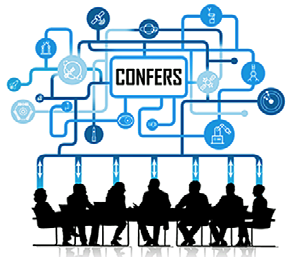 In doing so, the program would provide a clear technical basis for definitions and expectations of responsible behavior in outer space. The standards would be broad enough to allow individual companies to pursue their own implementations of these standards to suit their individual businesses, while assuring that the implementations adhere to best practices for operational safety.

DARPA aims to transfer CONFERS leadership and funding to industry by 2021, when the Agency is scheduled to perform its first on-orbit demonstration of RSGS. The Agency also intends, by that time, to release the standards for general use by commercial on orbit servicing organizations.

Mr. Todd Master joined DARPA in April 2016 from his previous position with Orbital ATK as a missions systems engineer. He was also the launch operations manager and deputy program director at International Launch Systems. He is now a program manager in DARPA's Tactical Technology Office.

That altitude is an ideal perch for providing communications, meteorology and national security services, but one so remote as to preclude inspection and diagnosis of malfunctioning components, much less upgrades or repairs. 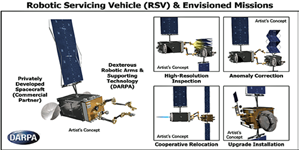 Even fully functional satellites sometimes find their working lives cut short simply because they carry obsolete payloads — a frustrating situation for owners of assets worth hundreds of millions of dollars. With no prospects for assistance once in orbit, satellites destined for GEO today are loaded with backup systems and as much fuel as can be accommodated, adding to their complexity, weight and cost.

But what if help was just a service call away?

DARPA’s Robotic Servicing of Geosynchronous Satellites (RSGS) program intends to answer that question by developing technologies that would enable cooperative inspection and servicing in GEO and demonstrating those technologies on orbit within the next five years.

Under the RSGS vision, a DARPA-developed modular toolkit, including hardware and software, would be joined to a privately developed spacecraft to create a commercially owned and operated robotic servicing vehicle (RSV) that could make house calls in space.

By executing the RSGS program, DARPA seeks to:

• Demonstrate in or near GEO that a robotic servicing vehicle can perform safe, reliable, useful and efficient operations, with the flexibility to adapt to a variety of on-orbit missions and conditions
• Demonstrate satellite servicing mission operations on operational GEO satellites in collaboration with commercial and U.S. Government spacecraft operators
• Support the development of a servicer spacecraft with sufficient propellant and payload robustness to enable dozens of missions over several years

Dr. Gordon Roesler joined DARPA in May 2014 after working as a Senior Project Engineer at the Australian Centre for Space Engineering Research at the University of South Wales. His past research interests have included space systems, robotic naval vehicles, sensor systems, and energy systems. At DARPA, he is primarily interested in developing a capability for robotic servicing of satellites.

In an important step toward a new era of advanced, cost-effective robotic capabilities in space, DARPA today announced that it has selected Space Systems Loral (SSL), based in Palo Alto, California as its commercial partner for the Agency’s Robotic Servicing of Geosynchronous Satellites (RSGS) program.

DARPA and SSL seek to develop technologies that would enable cooperative inspection and servicing of satellites in geosynchronous orbit (GEO), more than 20,000 miles above the Earth, and demonstrate those technologies on orbit. If successful, this research and demonstration effort would open the door to radically lowering the risks and costs of operating in GEO, a harsh and difficult-to-access domain that is critically important for both military and civilian space assets.

Under an agreement drafted jointly by DARPA and SSL, the two entities would share costs and responsibilities for the program. While such public-private partnerships have become common in several domains of research and development—saving taxpayer dollars by requiring commercial partners to invest significantly in projects rather than simply receive government funding—the RSGS public-private effort would be a first for DARPA in the space-servicing domain. As such, the Agency’s selection of SSL and the pending agreement have been submitted for review by the Defense Department’s Under Secretary of Defense for Acquisition, Technology and Logistics.

With RSGS, DARPA plans to develop a robotic module, including hardware and software, and provide technical expertise and a Government-funded launch. SSL would provide a spacecraft and would be responsible for integrating the module onto it to create a robotic servicing vehicle (RSV) and the RSV onto the launch vehicle, as well as providing a mission operations center and staff.

After a successful on-orbit demonstration of the RSV, SSL would operate the vehicle and make cooperative servicing available to both military and commercial GEO satellite owners on a fee-for-service basis. In exchange for providing property to SSL, the Government would obtain reduced-priced servicing of its satellites and access to commercial satellite servicing data throughout the operational life of the RSV, again at great taxpayer savings. The capabilities that RSGS aims to make possible include:

• High-resolution inspection
• Correction of some types of mechanical anomalies, such as solar array and antenna deployment malfunctions
• Assistance with relocation and other orbital maneuvers
• Installation of attachable payloads, enabling upgrades or entirely new capabilities for existing assets

In parallel with the RSGS partnership, DARPA also intends to provide the Government-developed space robotics technology to other interested U.S. space corporations. Qualified companies would be able to obtain and license the technology through cooperative research and development agreements.

Separately, to help ensure the long-term sustainability of RSGS and other future space operations—and provide the foundation for a new commercial repertoire of robust space-based capabilities—DARPA recently solicited research to develop and publish consensus operational safety standards for on-orbit rendezvous and proximity operations (RPO) and robotic servicing operations. The awardee would establish and manage the Consortium for Execution of Rendezvous and Servicing Operations (CONFERS), which would include both private sector and government technical experts.

Through CONFERS, DARPA will establish an industry/government forum composed of experts from throughout the space community. The forum would develop non-binding, consensus-derived technical and safety standards for on orbit servicing operations, and help create definitions and expectations of responsible behavior in outer space.

“As the worldwide space industry expands and access to space becomes more routine, the need for norms of behavior—the ‘rules of the road’—will become increasingly important to preserve the ability of companies and government agencies to safely operate their space systems,” said Brad Tousley, the Director of DARPA’s Tactical Technology Office, which will oversee RSGS. “With these two high-value DARPA programs, we hope to accelerate the development of norms of operation supporting a robust space servicing capability, which in turn could radically transform the way we build and operate satellites and, in time, enable future large-scale logistics and construction in the GEO environment.”