For several years, the U.S. Department of Defense (DoD) has been calling for SATCOM flexibility and interoperability.

Indeed, in 2017, DoD tapped Hughes for a study to help assess the ideal hybrid SATCOM architecture and how diverse systems can work together. Hughes, based on experience with satellite networking for critical infrastructure operations, recommended  that  DoD  pursue  a  SATCOM  strategy that supports interoperability for wideband government applications  to  enhance  communications  infrastructure and reduce acquisition and operations costs. 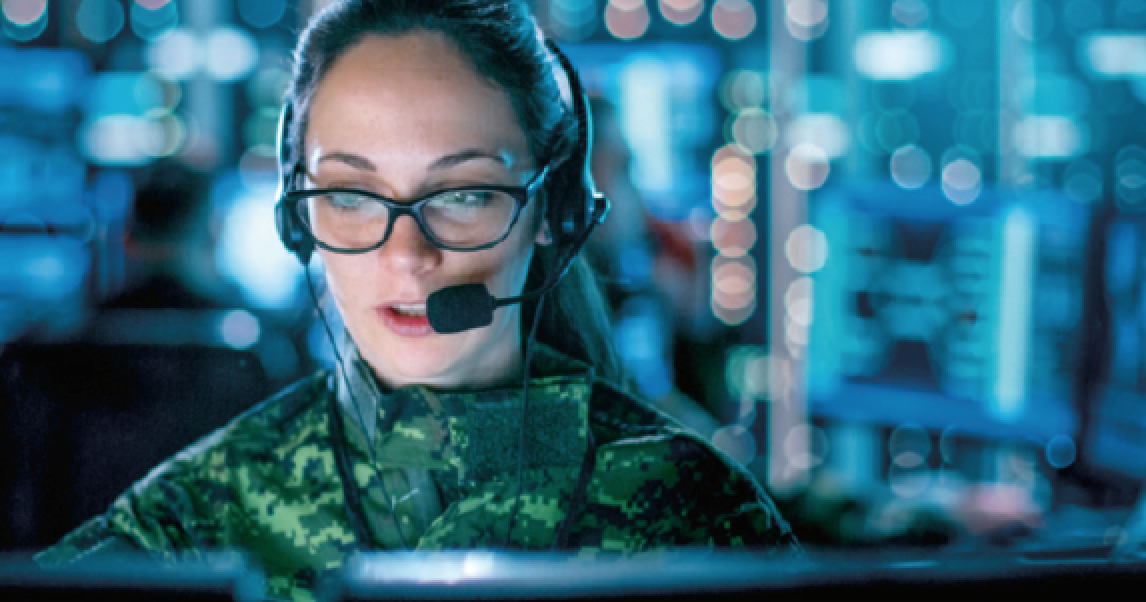 Now, just three years later, DoD has the key to unlocking the resilient networking they need to deliver on their missions,  regardless   of  service  provider,  equipment manufacturer  and  geography.  What’s  more,  operators of critical infrastructure worldwide can now implement modern, resilient solutions. 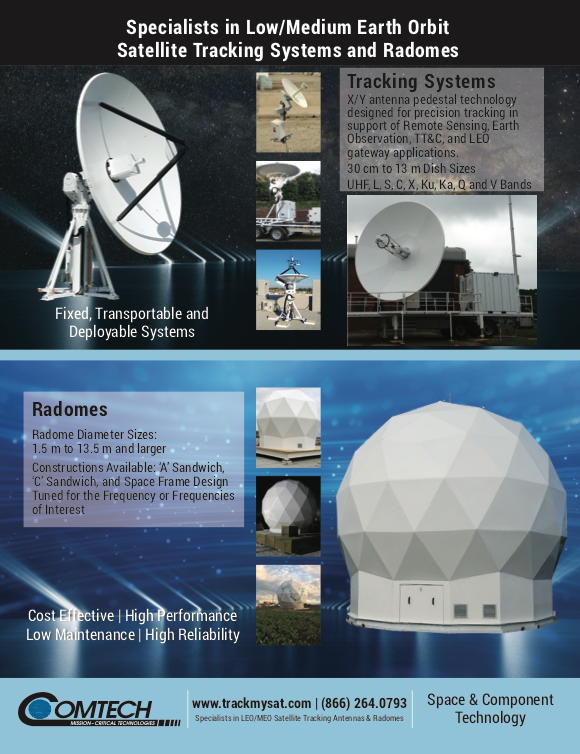 Based on an Artificial Intelligence (AI) rules engine, the Terminal Management Agent (TMA) from Hughes is a ground-breaking,   custom-developed  software  feature within a satellite terminal that interconnects seamlessly with various satellite modems, regardless of manufacturer or satellite system.

Powering  the   ultimate   in  SATCOM  flexibility,  TMA overrides stove-piped systems to enable user access to diverse platforms from a single terminal — ensuring the reliability and expediency that are essential for defense resilient networking.

TMA is a transformational software technology, inspired by the industry-leading  commercial  SD-WAN  product from Hughes, and augmented  with an AI rules-engine for  flexible   adaptation   for  defense   needs.   Instead of  manual  reconfigurations   which  can  require  hours and days of coordination,  TMA can orchestrate  within seconds and minutes.

With a small software footprint, TMA can be hosted on a  terminal  computer  Virtual  Machine  (VM)  or  a  small dongle. The software can send and receive RF, device, and cyber monitoring data to and from a management system and is compatible with modern, open enterprise management architectures. 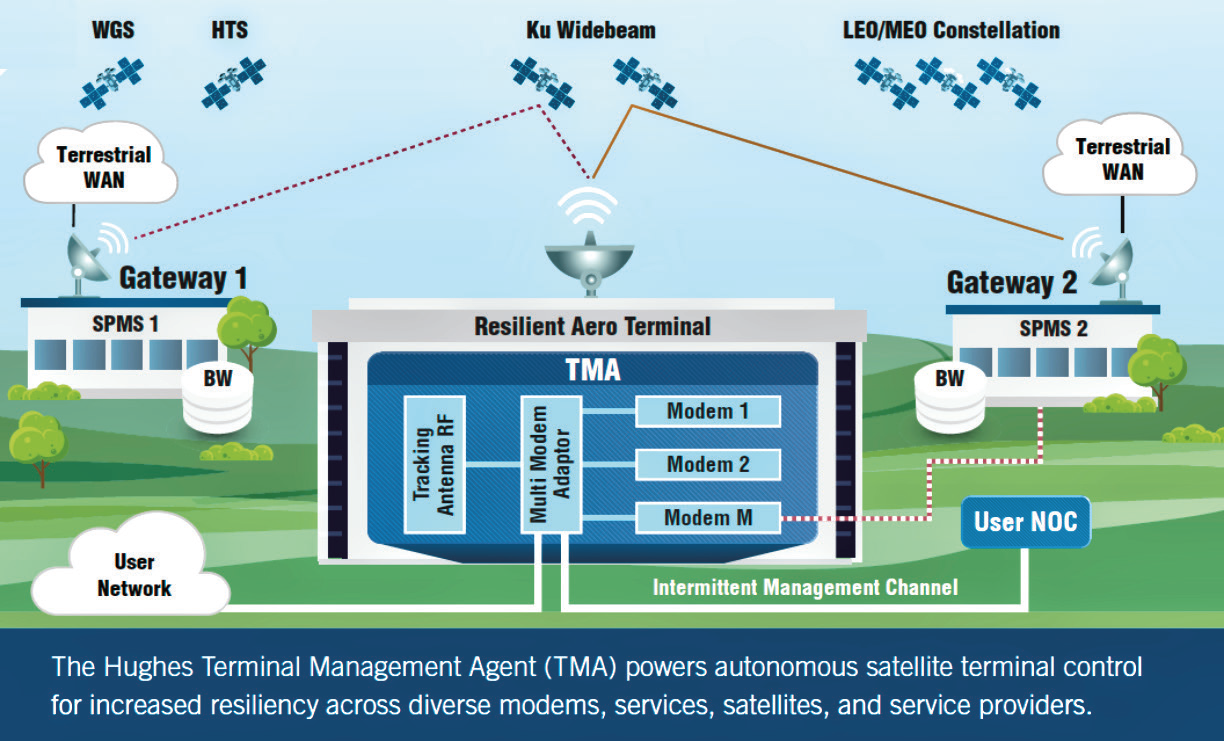 TMA is fully compatible with modern  enterprise management and control architectures and can interact with the GNOC over an intermittent channel. TMA autonomously orchestrates various resources, based on mission/service planning policies from the GNOC, to achieve service efficiency, priority and assurance objectives.

With  local  decision-making,  TMA benefits from the GNOC’s global guidance in the use of specific satellites, service providers, and resource pools.

The  IPS/IDS  software  appliances  provide  packet-level policing, filtering, and control in both directions (from and  to the user network) under guidance from Global Network Operations Center (GNOC)-based policies. 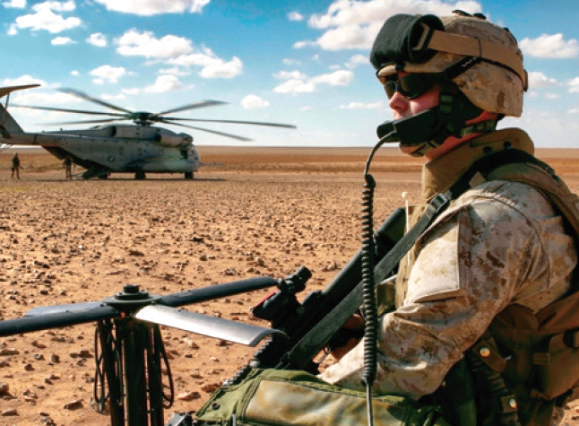 With threats to critical communications networks on the rise around the world, TMA adapts to evolving landscapes and  brings security measures to the network edge for both monitoring and rapid orchestration.

TMA  monitors  various  terminal  components,  collects data and forwards it to the GNOC for global optimization based on data mining and analytics, including:

How a rules-engine monitors terminal state and uses rules in decision making:

TMA  allows  critical  application  domains  to  leverage highly  cost-effective  High-Throughput  Satellite  (HTS) services which can coexist (with the use of an HTS modem providing managed service in a TMA-equipped terminal) with other mission specific modems and service providers.

The military typically uses different types of terminals for aeronautical,  land,  and  marine  applications.  Equipped with   auto-pointing   —   and,   often,   auto-tracking  — antennas, these terminals can be modernized easily and cost-effectively with TMA to roam automatically across multiple  service  providers,  by  using  their  respective modems—and leveraging HTS services.

Some examples of these rules include:

To continuously refine the rules, the GNOC processes situational awareness data from the TMA, using pattern recognition,   data   analytics,   and   machine   learning techniques. The TMA can execute these rules even with an intermittent terminal management channel (either in- band or out of band).

TMA will be enhanced to control multiple antennas for concurrent use across services in order to manage load-balancing  and  traffic  prioritization  objectives  and support Non-Geostationary Satellite Orbits (NGSO), including both Medium Earth Orbit (MEO) and Low Earth Orbit (LEO) constellations.

The author of this Tech Focus feature is Rick Lober, the Vice President and General Manager of the Defense and Intelligence Systems Division at Hughes Network Systems,LLC. He can be reached at www.linkedin.com/in/ricklober/?_l=en_US.

Under his leadership, the Defense team has won programs such as: SATCOM for the General Atomics Predator UAV; mission management for the U.S. Air Force Space and Missile Command’s Protected Tactical Enterprise Systems (PTES) and Enterprise Management and Control (EMC) program; the application of Artificial Intelligence (AI) and Machine Learning (ML) techniques for the U.S. Army’s Narrowband SATCOM Network; and specialized terminal development for the U.S. Special Operations Command (SOCOM).

From his early days as a design engineer, Mr. Lober brings more than 25 years of experience with COTS and full MIL communications and intelligence programs.

Having earned a Bachelor’s Degree and Master of Science Degree in Electrical Engineering from the University of Illinois, Urbana, Mr. Lober is a member of Eta Kappa Nu, Tau Beta Pi, TEC, IEEE, AFCEA, AUSA, AAAA, AUVSi and the Society of Satellite Professionals International (SSPI) and holds a patent on cellular communications for emergency response.