The time and cost saving benefits of commercially hosted government payloads are no longer mere talking points exchanged between niche players in the industry and space-savvy users within the Department of Defense.

During his confirmation hearing as Defense Secretary Nominee, Charles “Chuck” Hagel was asked if he supported commercial hosting of Defense payloads.

“Hosted payloads are one of the ways to enhance resilience and assure space capabilities in the congested, contested and competitive space environment. If confirmed, I would support innovative approaches to improve the national security benefits we derive from space in a budget-constrained environment, including through the use of hosted payloads,” said Hagel. 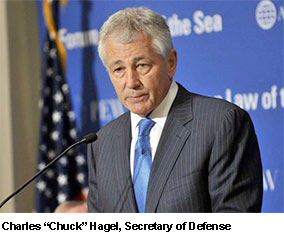 As Hagel’s statement indicates, the U.S. Government’s current financial situation has driven senior officials to pay increased attention to ways in which the government can save substantially by partnering with industry to gain access to space capabilities. As advocates for, and educators of, innovative commercial solutions to deliver capabilities to orbit, the Hosted Payload Alliance is pleased to see heightened attention to this under-utilized means of accessing space.

Members of the Hosted Payload Alliance (HPA) were asked what they believe Chuck Hagel’s remarks signify for the future of commercially hosted government payloads.

“We’re happy to see Senator Hagel is among the supporters of hosted payloads. We fully agree with his view that hosting scaled-down versions of current MILSATCOM capabilities can substantively improve both the capacity and the resilience of these networks.  We have worked closely with previous Secretaries of Defense and their staffs to craft affordable solutions to important national security problems. We look forward to a continued close relationship with the future Defense Secretary, whoever it may be.”—Rick Skinner, Business Development Director, Northrop Grumman.

“Senator Hagel’s remarks signify a level of understanding of the value of thinking outside the box and approaching space differently than we have traditionally. His forward-looking perspective is refreshing in that it reveals an appreciation for engaging industry in innovative ways to deliver cost effective space capability.”—Tip Osterthaler, President and CEO, SES Government Solutions.

“As defense budgets and schedules continue to tighten, discussions and contractual decisions are being made to plan for a more permanent and sustainable arrangement to deploy military applications. This is right in line with Senator Hagel’s remarks about utilizing hosted payloads as a solution.  Whether it is a long term or permanent endeavor—hosted payloads offer a cheaper, faster and more efficient way to launch their capabilities into space.”—Dawn Harms, Vice President of Sales, Marketing and Communications for International Launch Services (ILS).

“It is great to see the progress hosted payloads have made over the last two years.  Senator Hagel’s comments on the value of hosted payloads as an innovative approach to fulfilling space missions demonstrates that hosted payloads are viewed as a credible option by highest leadership of the Defense Department.  The Hosted Payload Alliance looks forward to working with the Office of the Secretary of Defense on hosted payload initiatives.”—Don Thoma, CEO, Aireon LLC.

“Upon the confirmation of the next Secretary of Defense, we anticipate that the trend to provide viable and affordable commercial options to meet the ever increasing needs of the warfighter will continue.  The expanded use of hosted payloads can accelerate our military communications and intelligence gathering capability in a responsive and affordable manner. Ultimately the goal of our industry is for our defense infrastructure to have the necessary tools to effectively and successfully protect our interests in an extremely dynamic geo-political environment.”—Carl D’Alessandro, Vice President of Advanced Programs and Technology at Harris Corporation.

“It is good news indeed to hear the man who will probably be our next Secretary of Defense take such an objective look at the best means for the DoD to meet its communications needs.  Mr. Hagel joins several other open-minded thinkers in the U.S. government when he affirms the nation’s needs for innovative and cost-effective communications solutions such as hosted payloads on commercial satellites. True adoption of hosted payloads will take place once this technology is accepted and implemented by all levels of the acquisition hierarchy in the DoD and Congress.  We hope Mr. Hagel will be the one to lead this.”—Nancy Nolting, Marketing Program Manager, Intelsat General Corporation.

“COM DEV designs and produces spaceflight payload hardware exclusively, which we deliver to the satellite manufacturers. We have flown hardware on numerous Hosted Payloads to date, comprising military communications, remote sensing and Earth observation. Having developed a family of spaceflight products over many years enables us to rapidly respond with hardware solutions for the Customer. The key to success in delivering Hosted Payloads on commercial satellites is all timing—often a short 24 month cycle.  Senator Hagel’s call for innovative approaches is most welcome and we are ready to support and participate!”—Chris Willson, P.Eng., Director, Business Development, COM DEV International Ltd.

“It is very encouraging to know the Department of the Secretary of Defense nominee is familiar with the advantages of commercially hosted payloads. To move the Department forward in this regard, industry must work with government on innovative solutions to the information assurance (IA) challenges posed by moving data from sensitive payloads through the commercial information sphere to the military information sphere. These enabling IA technologies will make it possible to securely expand today’s national security mission architectures to include affordable, commercially-leveraged elements.”—Dave Anhalt, Vice President, U.S. Government Solutions, Space Systems/Loral