As the strategies for the nexgen space mission area architectures are being discussed and developed, there are expectations that government and military teamwork with commercial satellite operators and manufacturers will enable more affordable and resilient solutions. Hosted payloads offer a cost-effective way to ensure a broad range of U.S. government capabilities are delivered into space. However, there are other means, as well, for the U.S. government to work with industry to build in the resilience that is derived from disaggregating important assets. 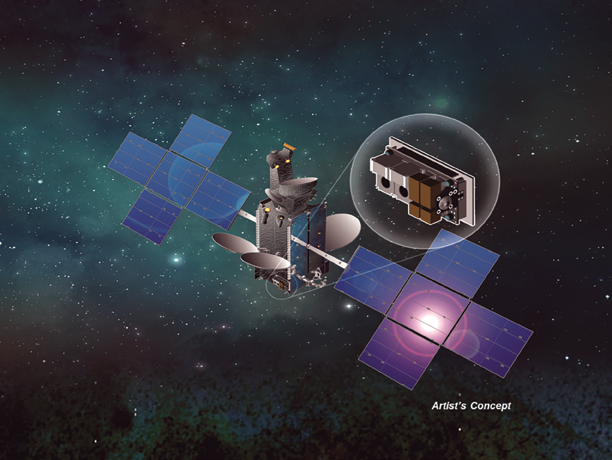 Driven by budget cuts and fierce competition, the satellite industry is exploring a variety of ways to make “access to space” easier and more cost-effective for commercial and government missions. This article discusses some of the ways that U.S. government agencies are working with industry; and creative, non-traditional ways available today to meet next-generation requirements for national defense and space exploration.

The Benefits Of Hosted Payloads
There are typically 20 to 23 commercial satellites launched to GEO annually. Each of these satellites has the potential to carry additional payloads. The benefits of hosted payloads have been discussed frequently over the last several years and much attention is given to reduced cost, shortened time to launch, and the opportunity to disaggregate important capabilities. However, an often overlooked benefit is the use of commercial ground systems.

A primary issue relative to U.S. government satellite systems is the proprietary nature of the related ground infrastructure. These are known to be stove-piped systems, each with its own infrastructure and little or no compatibility between the systems. This makes data transport on the ground less resilient, more  expensive to operate, and even more expensive to upgrade.

In the “View From the Top” panel at the 2014 Space Symposium in Colorado Springs, Eric Spittle, president of SSL Federal, pointed
out that the commercial satellite industry provides a remarkably resilient, redundant and widely geographically dispersed array of gateways, teleports and connecting fiber networks that all use interoperable standards.

“One of the key benefits to hosting U.S. Government payloads on commercial satellites is the use of this ground infrastructure,” he said. “This provides compatibility between systems, making data transport on the ground more resilient, less expensive to operate, and easier
to upgrade.”

NASA Leading the Way
SSL is encouraged by the trend of U.S. government agencies in their move to actively partner with industry to lower the cost of space missions in general. A good example is NASA’s recently completed Lunar Atmosphere Dust Environment Explorer (LADEE) mission (artistic rendition of LADEE is on the previous page). NASA tapped SSL to provide a propulsion system, similar to the one used in its commercial satellites, for the moon orbiter. The mission was highly successful and the propulsion system performed flawlessly.

“SSL has been an important part of the team that created the LADEE spacecraft,” said Butler Hine, LADEE Project Manager at NASA Ames Research Center. “The commercial experience that SSL brought to the team really enabled an innovative approach for LADEE.” 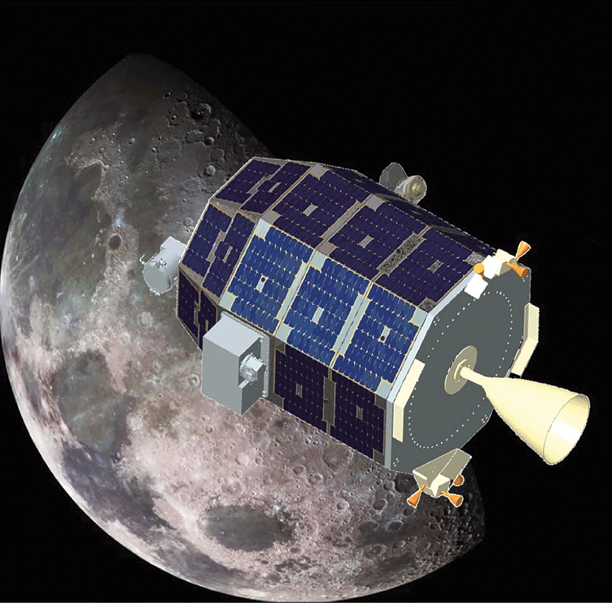 In addition to its primary mission, which was to gather detailed information about the structure and composition of the thin lunar atmosphere, the LADEE spacecraft carried a Lunar Laser Communication Demonstration (LLCD) on board and set a record for transmitting data from the moon to Earth. The test demonstrated high data rate communications that have the potential to transform communications for deep space missions. This successful demonstration is a vital precursor to a more comprehensive and enduring demonstration that will also be facilitated by SSL.

As the optical modules and ground stations for LCRD are being developed, SSL is working with its commercial customers to identify an appropriate host satellite for the demonstration. Laser communications technology is expected to provide next generation capability for NASA exploration missions and may also hold significant benefits for future commercial satellite communications.

Mike Weiss, who was the initial LCRD Project Manager at NASA’s Goddard Space Flight Center, commented in a 2013 press release: “SSL’s performance on the LCRD payload accommodation has met all of our accommodation criteria and exceeded all of our expectations. Companies with a commercial space focus, such as SSL, are helping NASA to reduce costs and maximize benefits while we continue to implement game-changing new technologies.”

SMC Next Generation Architecture Studies
Most government agencies are now looking at how to leverage the commercial industry to help reduce acquisition timelines and cost. SSL is one of several companies selected by the U.S. Air Force Space and Missile Systems Center (SMC) to develop affordable design concepts for nexgen Protected Military Satellite Communications (MILSATCOM). As a prime contractor leading several protected communications system and technology domain expert companies, SSL focused on providing proven solutions with shorter schedules and lower, better controlled cost, to defend against growing and changing intentional jamming and cyber threats and to deliver advanced communications capability to the warfighter.

The objective of the ongoing SMC program is to advance practical new architectures and technologies to protect increasingly contested and threatened warfighting communications. This year, there have been demonstrations of protected communications in Ka- and Ku-band over satellites built by SSL. This potential use of protected waveforms over commercial satellites could also have the benefit of unlocking the value of the integrated ground infrastructure previously discussed.

Dispensed Payloads
SSL is one of the companies working with the U.S. Defense Advanced Research Projects Agency (DARPA) to design and implement a system that will accommodate what DARPA calls the Payload Orbital Delivery (POD) system. This system enables affordable delivery of small, free-flying spacecraft beyond Low Earth Orbit (LEO) by releasing them from a commercial spacecraft, such as the SSL 1300, while in geo-transfer orbit, or after the satellite has reached its final orbital location. This capability can be leveraged for any type of small operational mission such as servicing or science and technology space missions.

POD systems could become an important capability for accomplishing missions in a cost-effective way, enabling refueling, on-orbit assembly, inspection, repair or debris mitigation. The expectation is that these capabilities are likely to enable new kinds of missions that aren’t currently thought possible to employ. SSL has sophisticated robotics capability as well as concepts for line replaceable units that will increase the value of future spacecraft and enable valuable assets to be updated in keeping with the rapidly changing technologies that are seen in the terrestrial world. 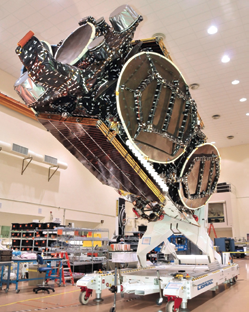 Dual Launch
Another way the cost of access to space can be reduced is by launching two satellites on a single launch vehicle. All electric satellites reduce mass sufficiently to enable dual launch on U.S.-built launch vehicles. SSL’s electric, orbit-raising solution is based on one of the industry’s highest thrust, highest reliability propulsion systems. The company began developing its electric propulsion technology more than 20 years ago and SSL’s first satellite with electric propulsion was launched in 2004.

SSL has an outstanding track record—14 satellites with electric propulsion are currently on orbit with roughly 35,000 hours of successful, on-orbit operation. The SSL all-electric platform is based on the nexgen of this proven thruster. The satellite design has the advantage of enabling dual launch on nearly every launch vehicle, including the Ariane 5, Atlas V, Falcon 9, H-IIA and H-IIB, and the ILS Proton. The platform also has the flexibility to be launched in a single launch configuration.

LEO Constellations
For agencies thinking about low-cost constellations that can be regularly refreshed with evolving technologies, there are a number of innovative LEO platforms being developed. In February 2014, SSL was awarded a contract by Skybox Imaging to build an advanced constellation of 13, small, Low Earth Orbit (LEO) satellites for Earth imaging.

This partnership with Skybox gives SSL an exclusive license to the satellite design, which can support a broad range of missions and payloads for commercial and government customers. The satellites are approximately 60 x 60 x 95 centimeters and weigh roughly 120 kilograms and will capture sub-meter color imagery and up to 90-second clips of HD video with 30 frames per second. SSL was delighted to demonstrate that the company could competitively build and deliver low cost, LEOs.

While maintaining its focus on commercial GEO communications satellites and traditional hosted payloads, SSL continues to develop new and untapped technologies that will enable the future space infrastructures. With 74 SSL-built satellites in the GEO belt, and a backlog of 22 GEO satellites in the manufacturing facility, SSL provides a highly effective backbone of commercial satellite infrastructure. The company is uniquely positioned to assist the U.S. government leverage regular access to space as a critical component of the nexgen space mission area architectures.

Hosted payloads, dispensed payloads, dual launches and low-cost LEOs comprise just a few of the new approaches for government agencies to benefit from partnering with commercial satellite manufacturers and telecom operator, all with two goals in mind—minimize cost yet maximize the use of commercially developed innovation for nexgen spatial systems.

Wendy has worked in the satellite industry since 2006 when she joined SSL and previously worked at a Silicon Valley public relations agency where she supported a broad range of high tech companies. She is an active member of the Hosted Payload Alliance communications committee and also manages investor relations for Loral Space & Communications.