The face of the Space Symposium has changed. I think those of you who joined us here in Colorado Springs would agree. We still had lots of U.S. Air Force generals on the agenda and strong support from U.S. Army space warfighters. But this year, the face of the Space Symposium was increasingly international... on the program stage, in the exhibit center, and in the private meetings. 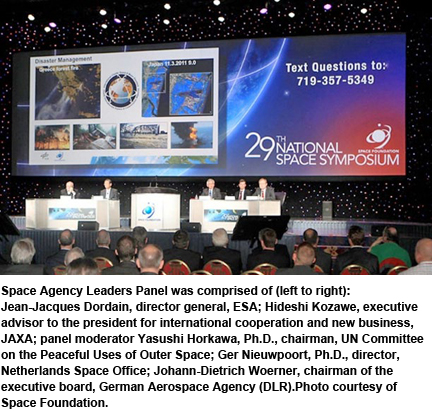 We all know who didn’t attend and why. And we’ve already heard from them about how they regret they couldn’t travel, and how they plan to be back next year. But we really should take a look at who was here.

International participation in the Space Symposium is not new. We’ve had international speakers and delegations for a number of years. What was striking, though, was the value our guests from abroad place on attending, and the very significant effort and investment they made to participate.

For example, Romain Bausch, president and CEO of SES, who flew on consecutive nights from and to Luxembourg to join us and deliver keynote remarks. Similar for Jean-Jacques Dordain, the director-general of ESA, who made time in a crowded travel schedule to join other officials on our panel of Space Agency Leaders (which this year included exclusively global partners).

The extraordinary effort of Dr. Yasushi Horikawa, the chairman of the United Nations Committee on the Peaceful Uses of Outer Space who made special arrangements to depart UN meetings in Vienna to moderate a Space Symposium panel, was deeply appreciated.

Despite the on-going transition of leadership within the Japan Aerospace Exploration Agency (JAXA), we were pleased to welcome back the executive director of the agency, Mr. Hideshi Kozawa.

While many of the global attendees come to hear the latest from the American presenters and meet with U.S. companies, that isn’t always the case. We received four Japanese industry registrations as we were heading on site, specifically for them to be in Colorado to hear the presentation on Japan’s new space policy by Mr. Tomotaka Inoue. 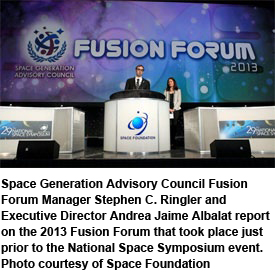 JAXA and its Japanese industry partners increased the size of their exhibit over the previous year and have already indicated they intend to increase even more next year.

The robust Japanese delegation was matched by the most significant German delegation, headed by Professor Johann-Dietrich Worner. The German delegation was with us throughout the week for a number of on- and off-agenda activities, including the inaugural meeting of the U.S.-German Aerospace Roundtable, a gathering of interested parties intending to foster better understanding of programs and capabilities and trans-Atlantic collaboration. We were honored to host a significant German military delegation headed by Brig. Gen. Christian Badia.

The importance of the Space Symposium as an international forum was also recognized by the presence of State Department representatives, and the participation of Deputy Assistant Secretary of State Frank Rose. 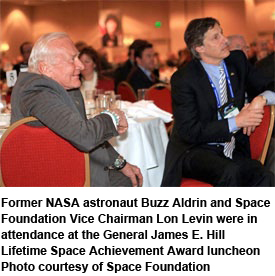 The Space Foundation’s program is complemented by the Space Generation Advisory Council’s (SGAC) Fusion Forum. We were again proud to be the host organization for the annual Fusion Forum, which brings together top young professionals from around the world for two days of speakers and panels before the formal start of the Space Symposium. In 2014, we look forward to hosting the 3rd Annual Fusion Forum and working with the SGAC again next May.

However, of all the faces at this year’s Space Symposium, perhaps none is more memorable or illustrative than that of the young Vietnamese space student sitting in the front row during the panel of Space Agency Leaders. While intently listening to the speakers, he made room in the open seat next to him for a gentleman who sat down. As he glanced toward the man, the look of awe when he realized it was none other than Buzz Aldrin was priceless.

Yes, the face of the Space Symposium has changed. In fact, we will no longer call the event the National Space Symposium, better reflecting the global nature of our event and our industry. We look forward to seeing you at the 30th Space Symposium as it is again the center of the space world.