Applauding The USAF For HPA Progress

The Hosted Payload Alliance (HPA) commends the Air Force Space and Missile Systems Center (SMC) for its leadership and innovative spirit in the development of timely and cost effective means for accessing space.

With the announcement of SMC’s new hosted payload contracting vehicle, the Command reveals its intention to maintain the momentum generated by their progress in this area.

The contract vehicle is called HoPS, or Hosted Payload Solutions. HoPS is intended to provide a rapid and flexible means for the government to acquire commercial satellite hosting capabilities for payloads. Through this indefinite-delivery, indefinite-quantity vehicle, SMC will establish a pool of candidates that can provide commercial host capabilities and hardware at Geostationary Orbit (GEO) and Low Earth Orbit (LEO).

Considering the current fiscal environment, the timing couldn’t have been better to embark on the HoPS effort. In the case of SMC’s commercially hosted infrared payload (CHIRP) program, the payload was delivered to orbit roughly three years from signing the contract with the commercial host, and at 15 percent of the cost of a dedicated military spacecraft program. Innovations such as CHIRP will enable SMC and other federal departments and agencies to obtain communications and space capabilities more rapidly and cost effectively.

As a consortium of space industry players organized to increase awareness of the benefits of commercially hosted payloads, the HPA applauds SMC for this effort to save precious resources as well as deliver critical communications capability for our Nation at home and abroad.

How do you foresee the HoPS contract vehicle affecting the way the government plans for, and acquires, space capability to meet future requirements?

“The implementation of the HoPS contract vehicle both formalizes and legitimizes the use of hosted payloads by the U.S. Government in its space systems architectures. The USAF/SMC should be commended for developing this contracting mechanism and making it available to NASA and other U.S. Government agencies that will benefit from affordable space access on reliable commercial platforms.”
—Al Tadros, Vice President, DoD and Civil Business, SSL

“I am going to assume that the solicitation generates numerous, compliant responses and establishes a rich set of hosting opportunities for the government.  This might not be the case if HoPS’ terms and conditions put too much risk on the private sector side of the partnership.  With that caveat, HoPS will provide another arrow in a program’s quiver as an approach to flying space experiments, demonstrations and operational capabilities.  I don’t think it’s a panacea for all things space.  Some payloads will be too large for cost-effective hosting.  Some payloads may require platform or mission characteristics that cannot be achieved from a commercial satellite, for example non-geosynchronous orbits.  The upside of HoPS is having another alternative to a free-flyer mission or a government satellite host.  More flight opportunities are good for hosted payload programs.”
—Tim Frei, Vice President – Communication Systems, Northrop Grumman Aerospace Systems 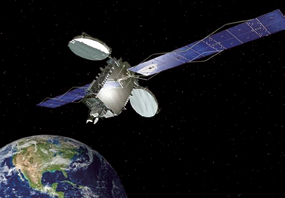 “As the first civilian agency to take advantage of the HoPS contracting vehicle, NASA’s $90 million Tropospheric Emissions: Monitoring of Pollution (TEMPO) mission would work in conjunction with the Hosted Payload Office (HPO) at Air Force Space and Missile Systems Center (SMC) in El Segundo, California. The IDIQ contract will facilitate United States Government (USG) procurement of available hosting space aboard commercial satellites.  Intelsat General Corporation has heard for a number of years that leveraging of hosted payload space on commercial platforms by the USG has been impeded by arduous USG contracting processes.  We are optimistic that the IDIQ approach will streamline this contracting process and yield benefits not only for the USAF, but also for civil agencies such as NASA and NOAA.”
—Dr. Bryan Benedict, Principal Program Manager, Business Development, Intelsat General Corporation

“We believe that the Hosted Payload Solutions solicitation and resulting contracts will provide the government with an effective and affordable contracting vehicle for hosting government and military payloads on a commercial spacecraft. We look forward to the prospect that this new process will become a routine part of government architectures during the next decade.”
—Dylan Browne, Vice President, Business and Market Development at Astrium Services Government, Inc.

“Harris commends the Air Force initiative of the HoPS contract and believes that it will transform and accelerate the hosted payload market. This vehicle will not only benefit the Government, but also attract commercial ventures that will be able to forecast and, therefore, leverage pre-planned hosting opportunities.  HoPS will have the potential to feed a steady stream of hosted payloads into the market ensuring its vitality. With the assurance of future hosted payloads, excess capacity and the added revenue stream it affords can be pre-planned, creating a vibrant and healthy market for commercial operators. From the Government standpoint, HoPS promises an unprecedented level of agility and responsiveness. A rapid procurement cycle enables the Government to now move at the pace of the commercial market. And, from a financial perspective, HoPS will provide the government the visibility it needs into commercial launch planning, to realize tremendous cost savings for those programs and missions that do not require dedicated launch systems and space vehicles. For all parties involved, the HoPS contract vehicle will provide tremendous opportunity and will result in a true win-win proposition. And, that is very exciting news for our industry and our market.”
—Janet Nickloy, Director of Strategy and Business Development, Harris Corporation, National Systems

A Means To An End

Joint military planners see the world through the lenses of “ends,” “ways,” and “means.” Roughly speaking, ends are ultimate objectives, ways are actions needed to accomplish those objectives, and means are the resources necessary to execute the mission. In this context, I believe most can agree that hosted payloads (HPs) are a way to an end and not an end, themselves.

Foundational documents, such as the National Security Space Strategy, provide the current desired objective for the Space Enterprise: affordable and resilient space systems (the ends). Due to the contested, congested and competitive state of the Space environment, the driving need is to achieve the end state before we find ourselves in the next major conflict against a highly capable adversary.

Whereas all the national security space mission areas are currently in production and sustainment phase, each is evaluating their next generation architectural choices. The prevailing thought is to consider disaggregated architectures to achieve more affordable systems, provide resiliency, and also expand the U.S. industry base. The enabling building blocks of disaggregated architectures are military-unique systems, commercial systems and services, and HPs.

Within disaggregated mission architectures, HPs are poised for a big pay-off in three areas:

As they provide on-orbit diversification inherently resulting in resiliency, HPs actually link the ends, ways and means. However, on-going U.S. Government studies must ultimately conclude that disaggregated architectures employing HPs also result in affordable total ownership cost, when space, ground and terminal segments are all considered. The DoD has yet to prove the affordability case for the ground and terminal segments and industry will have to help with that.

One possible affordability approach is to seek the “aggregation” of the information infrastructure across all mission areas operating HPs (i.e., SATCOM, missile warning, weather, and more). Dedicated ground and processing systems within each mission area, or worse, for each HP is unlikely to yield a more affordable Space Enterprise.

Because all satellite payloads are information sources and their data outputs can be viewed as a commodity, the commercial telecommunications industry is well equipped to protect, transport and process this data without the need for the U.S. Government to own the entire transport and processing infrastructure. Every day, terabytes of highly protected commercial data is transported all around the globe at a reasonable degree of risk that, in many cases, equals the degree of risk acceptable within the national security arena.

Industry accomplishes this with ground gateways, secure cloud processing centers, and terrestrial telecommunications links. It’s this author’s opinion that a certified and space-qualified Internet protocol encryption device allowing for ubiquitous flow of HP data across commercial infrastructure is the most critical technology needed to realize the affordability and resiliency that HPs can offer disaggregated space architectures.

With this solution in place, HPs will become a more readily available way to achieve the ends of affordable and resilient space systems with a lower amount of means (i.e., dollars).

What do you believe are critical technology enablers to pave the way for HPs to become prevalent within affordable and resilient disaggregated space architectures?

“The two critical technology enablers for ubiquitous HPs in affordable and resilient disaggregated space architectures are acquisition reform and regulatory reform. The government acquisition cycle adds time and cost to government usage of technology and re-calibrating that cycle to align with the commercial acquisition processes will reduce schedule and cost and open technological opportunities for government consumers. The current regulatory requirements imposed on government communications acquisition, implementation and operation drive up cost and schedule and disadvantage the most effective technologies currently available. Re-aligning regulatory requirements with commercially and academically accepted views of communications architectures will reduce cost and schedule, and give government consumers the opportunity to make use of the latest, most effective technologies available to meet their needs. These two enabling factors are critical to immediate and affordable use of available technologies as means of supporting the HP way to the operational ends demanded by government consumers.”
—Jackson Kemper III, Vice President, Defense and Federal Solutions, Harris CapRock

“While considering disaggregated mission architectures employing hosted payloads (HPs) for affordable options to space, the U.S. government should always put the launch solution into the long-term equation. Chuck eloquently states that HPs ‘link the end, ways and the means.’ Given that commercial Proton vehicle has launched the majority of the HPs in the last two years, this is one of the critical “means” for HPs and is a proven technology enabler.”
—Dawn Harms, Vice President of Sales, Marketing and Communications, International Launch Services

“Hosted Payloads can be designed and built using flight-proven technology that has been developed on a wide variety of government and commercial programs. Technology issues have not been preventing the wider adoption of hosted payloads. Instead, the primary barriers have centered around the undefined combined commercial and government space architecture, lack of government-furnished requirements, long decision-making timelines, information assurance, lack of long term government commitments, and related issues. If those barriers can be resolved, future government and commercial technological investments can then be aligned with the entire process.”
—James F. Mitchell, Vice President, Boeing Commercial Satellite Services

“Hosted payloads are at an exciting crossroads within the satellite community. There remains a large opportunity for growth due to the desire for resiliency, availability of varying technology platforms, and overall cost. In order for hosted payloads to become a more prevalent option for access to space, the commercial space industry needs to remain robust, providing a continuum of scheduled launch opportunities for government and military sectors to take advantage. Furthermore, the commercial industry must continue to put in place the technical and operational processes and infrastructure to support hosted payloads. Aireon™ has been able to take advantage of Iridium NEXT’s launch schedule, by keeping pace with the tempo and hosting opportunity afforded by a large scale constellation deployment.”
—Don Thoma, President and CEO Aireon LLC 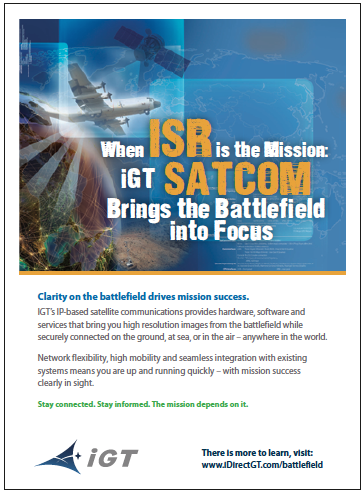