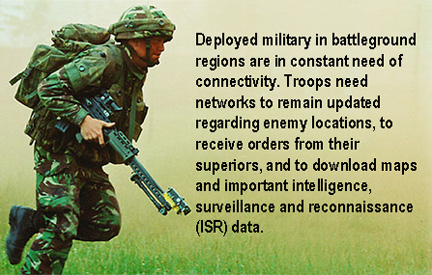 However, terrestrial networks experience outages from time to time. These outages can be caused by weather conditions, hostile actions and even network intrusions. While this can be aggravating to a casual computer user, for mission-critical military personnel—as well as first responders, law enforcement, state and local governments and disaster recovery organizations—network outages can be life threatening.

Therefore, it is important that government agencies, emergency response and military organizations maintain continuity of operations (COOP) during and after an event. An important technology that enables organizations to do just that is satellite communications. By providing end-to-end Internet Protocol (IP) services over satellite, SATCOM can operate completely independent of a terrestrial infrastructure, or seamlessly integrate with an existing terrestrial infrastructure, providing anytime and anywhere connectivity worldwide.

Satellite communications are extremely reliable and secure, and they are also resilient. Satellite allows users to bypass the existing terrestrial infrastructure while providing the same user experience as traditional networks. The technology proves particularly advantageous for the military and emergency responders who need to quickly communicate on the move, or set up networks on the fly that can be scaled without the restrictions of an existing communications infrastructure. SATCOM is easily deployable and supports all voice, video and data communications requirements with high network availability.

Effective SATCOM networks deliver fast, non-stop connectivity, operating from a flexible platform that supports multiple satellites and bands, including X-, C-, Ku-, and Ka- over commercial or WGS satellite frequency. One SATCOM developer that knows this as well as any organization is iDirect Government Technology (iGT). iGT delivers an encrypted satellite communications system that can be easily configured to suit any mixture of voice, video and data communications requirements and IP applications with stellar network availability. iGT’s system can be integrated into terrestrial infrastructures to support COOP. 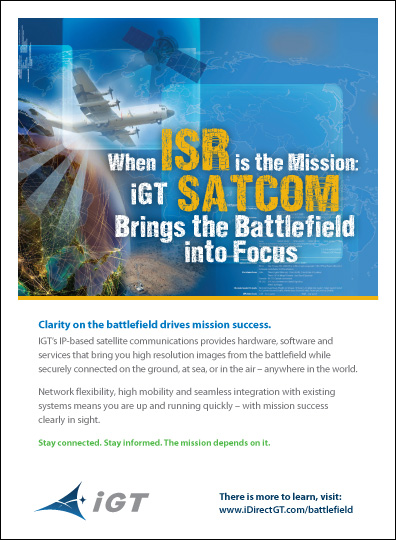 In the city of Chicago, for example, iGT and Morgan Franklin developed the Unified Command Vehicle (UCV) to assist during emergencies. During a disaster, the UCV system can remotely coordinate rescue efforts and dispatch police, fire and EMS units. The system can also provide satellite-based backup for the city’s entire 9-1-1 call volume from any location, acting as a mobile communications gateway for a temporary base of operations. The vision for the unified command system includes projecting the technical and logistics footprint of any organization to any point in the continental United States using virtually any band satellite. Leveraging commercially available technologies and standards where possible, satellite provides incident command and communications coordination (including radio interoperability/cross-banding) for major events and critical incidents.

A properly equipped UCV is able to provide instant situational awareness while on the move, eliminating the setup and alignment procedures for reach-back satellite communications. The system is easy to use, also eliminating the requirement for expert technicians on site for setup and operation.

The same ingenuity went into setting up a communications system for a relief agency in the aftermath of Hurricane Katrina. The agency needed to coordinate relief and serve thousands of displaced people and needed a system that could be deployed quickly while bypassing the heavily damaged terrestrial infrastructure, which had been heavily damaged in places and completely destroyed in others. The network needed to be easily scaled, extended to reach any geographical location, easy to transport, and with user-friendly configuration, management and maintenance. The solution included a single hub chassis installed at a Virginia teleport hub and 40 satellite routers deployed at needed locations in the Louisiana region. From the teleport hub in Virginia, the agency was able to configure, monitor and control all remote access sites, and even customize services to meet individual site requirements.

The agency continues to deploy the satellite communications system to assist during emergency disaster response, and the satellite communications technology is getting even better. This past summer, iGT rolled out SatManage 5.2, an upgrade to its suite of web-based software tools that integrate, monitor and automate hybrid networks and Network Operations Center (NOC)-based applications. SatManage enables first responders, public safety, military and national security agencies to transform how they manage complex deployments, resulting in stronger network performance, faster response times, and more secure communications.

Public safety and security agencies rely on the solution to meet the communications demands of any emergency situation and to support coordinated efforts in response to emergencies. SatManage helps the military and emergency responders to better protect people and property when facing threats that range from extreme weather, terror/criminal acts and other unforeseen events.

In this day and time, effective back-up network capabilities are not merely a luxury. COOP has become an absolute critical component to ensure mission-critical operations are not compromised.