The United States isn’t the only space-faring nation on the planet.

“Given all the commercial, military and national security benefits the United States has enjoyed since the earliest days of space exploration, it’s not surprising that other countries have decided they too could benefit with their own space programs,” said Lieutenant Colonel Mark Gould, Director of Security and Senior Intelligence Officer for the Space and Missile Systems Center. 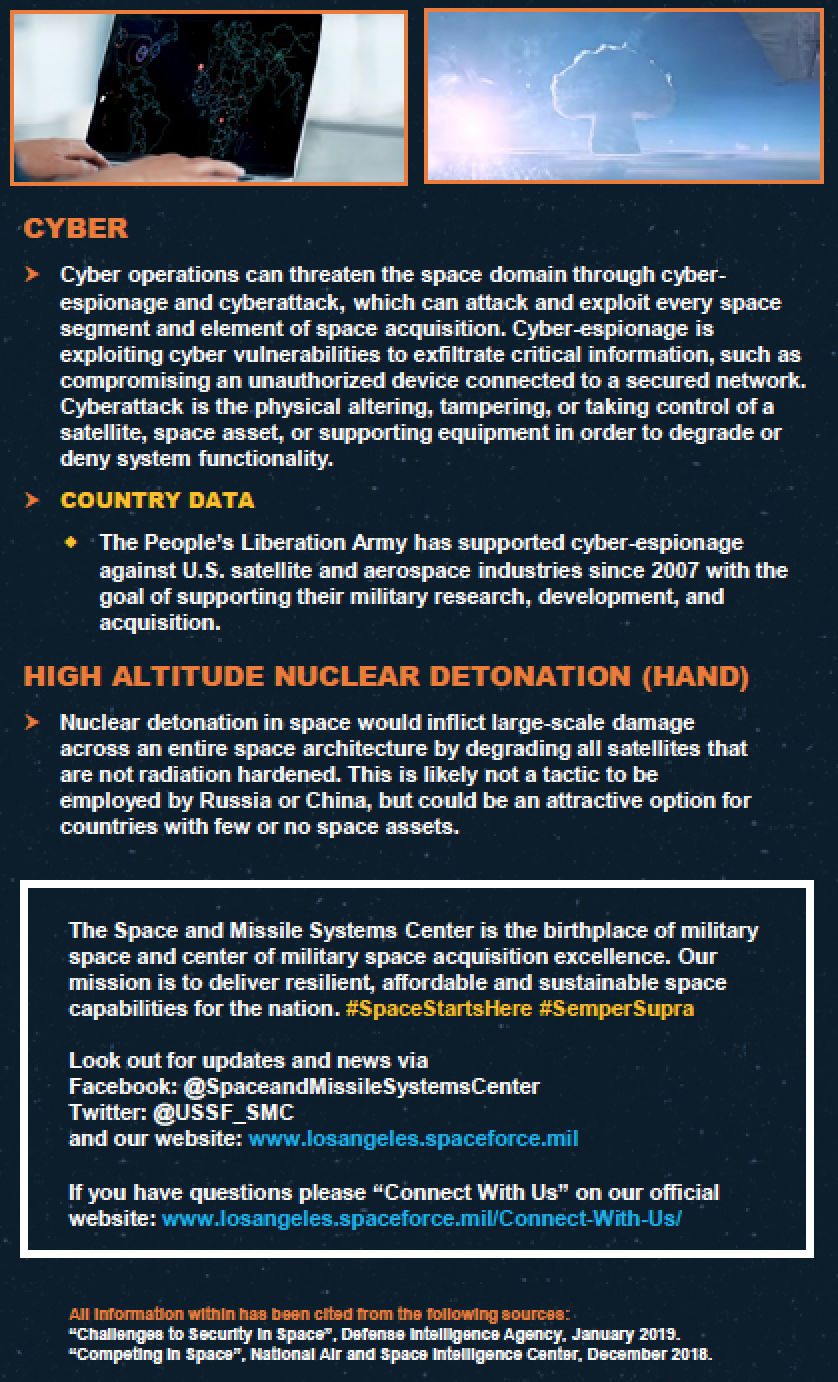 “Many are developing their own space programs, complete with launch capacity. Others are finding ways to deny, disrupt, degrade or destroy U.S. systems. Our job is to make sure the United States and its allies continue to have access to space and to protect the global commons.”

Nearly 80 countries have some kind of space program, and at least eight other countries and one international organization, the European Space Agency, have launch capacity.

The composition and focus of each country’s space program varies, but several have developed capabilities that pose potential threats to the United States’ space assets, its economy and its national security.

“Space enables warfighting on the highest end of conflicts: the most technologically advanced weapons systems all involve space,” said Captain Krishna C. Rengan, Chief, Intelligence Operations, SMC, Directorate of Intelligence. “Access to space also enables communications, reconnaissance, navigations, meteorology and missile warning. All these things give us advance warning for potential threats, which can be man-made, or environmental, in terms of meteorology. Everything revolves around space.” 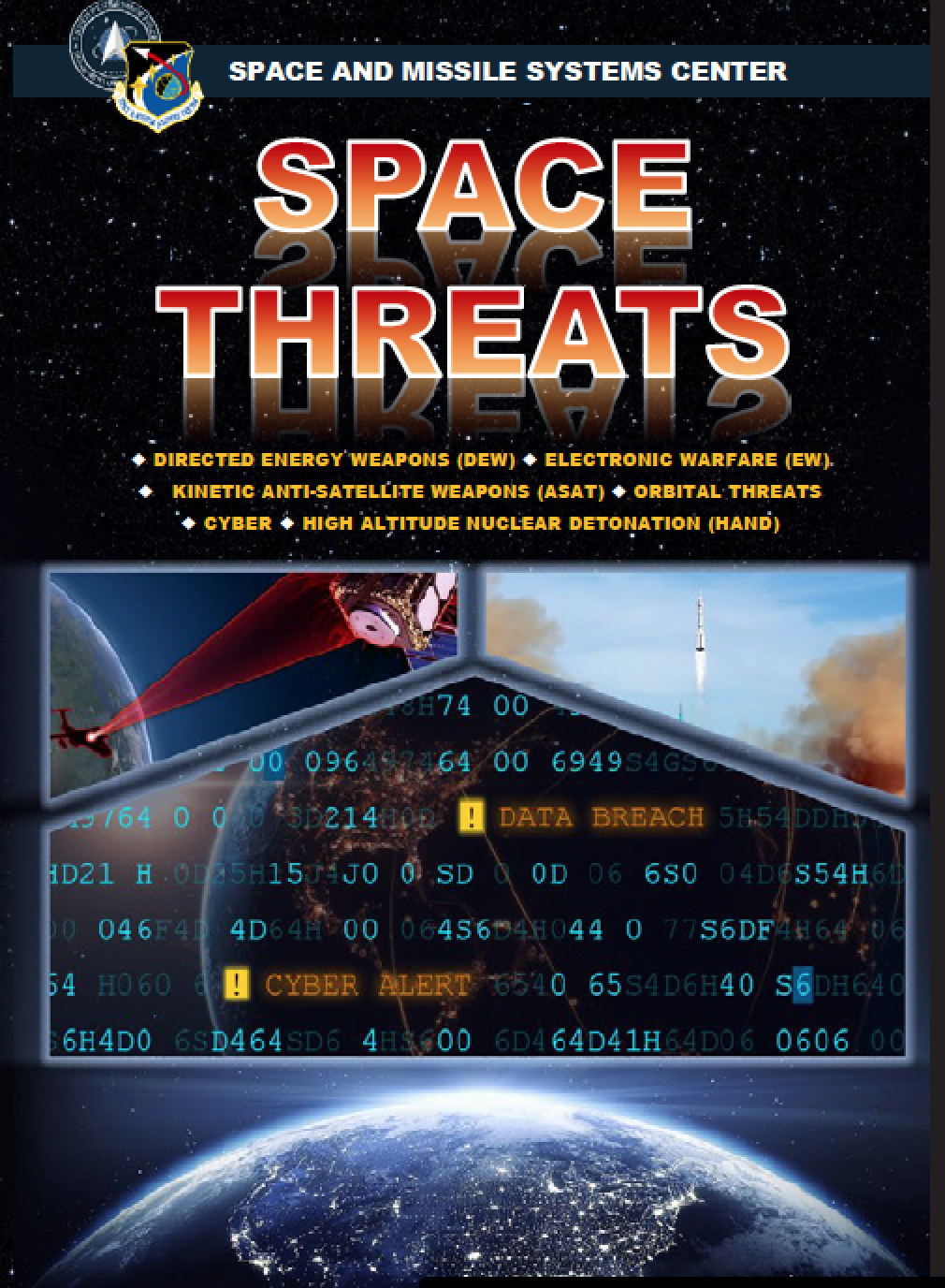 “They are on a continuum in terms of aggressiveness, but even a less aggressive attack, such as electronic warfare, can have expensive and potentially devastating consequences. If an adversary cuts those communications between ground stations and users, then we’ve lost those communications, reconnaissance, and missile warning functions.

That would translate into a threat to everything from everyday navigation to national security and we would really lose our competitive edge,” Rengan said. 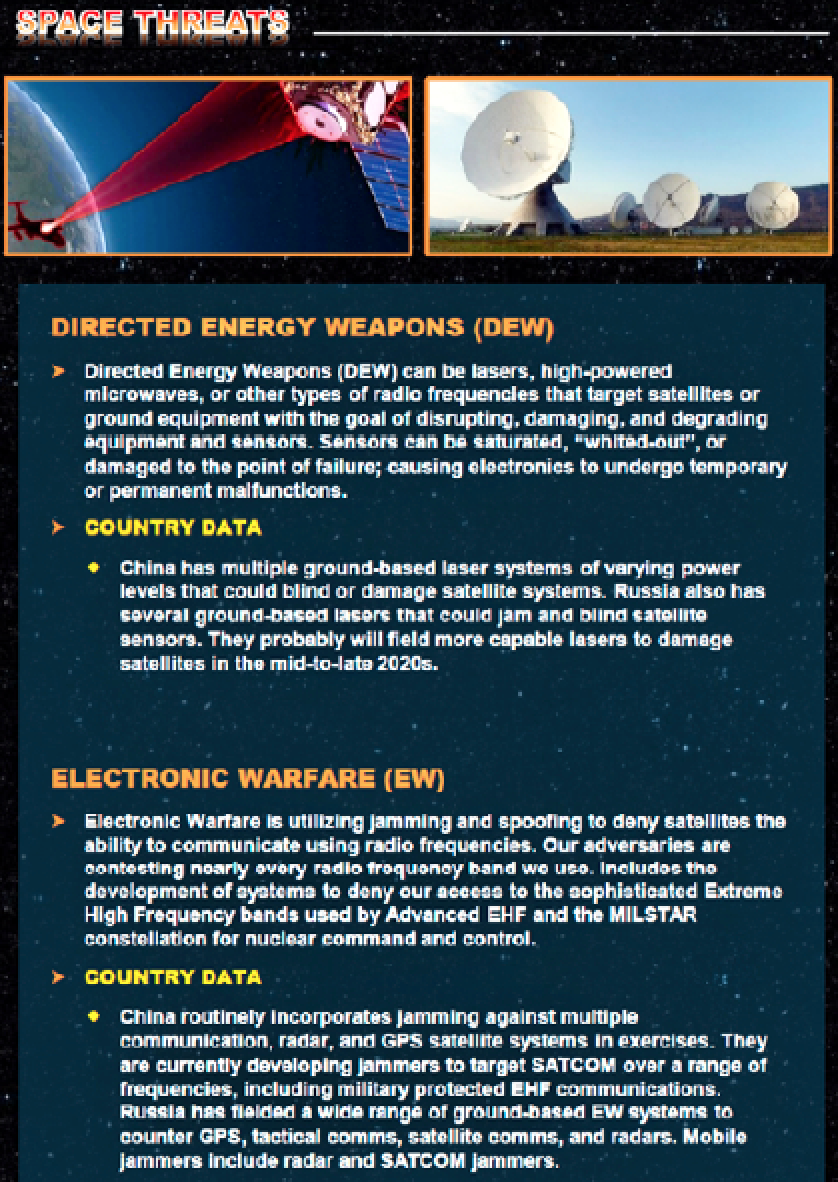 “If we can’t see something because of some sort of malicious attack, then that prevents us from understanding what’s going on in the battle space. We lose the ability to place our ballistic missile defenses in the right places as well as the ability to position and inform our soldiers to deter aggressive action. The safety of the world in terms of nuclear proliferation would also be at great risk.”

Both the Office of the Director of National Intelligence (ODNI) and the Center for Strategic and International Studies (CSIS) recently released their annual threat assessments and both found that China and Russia are the United States’ main competitors in space and pose the greatest challenges to our nation.

According to the ODNI’s Annual Threat Assessment, China “is working to match or exceed U.S. capabilities in space to gain the military, economic and prestige benefits that Washington has accrued from space leadership.”

China is expected to have a space station in Low Earth Orbit (LEO) between 2022 and 2024. That country also plans to conduct additional lunar exploration missions and intends to establish a robotic research station on the Moon and later, an intermittently crewed lunar base. 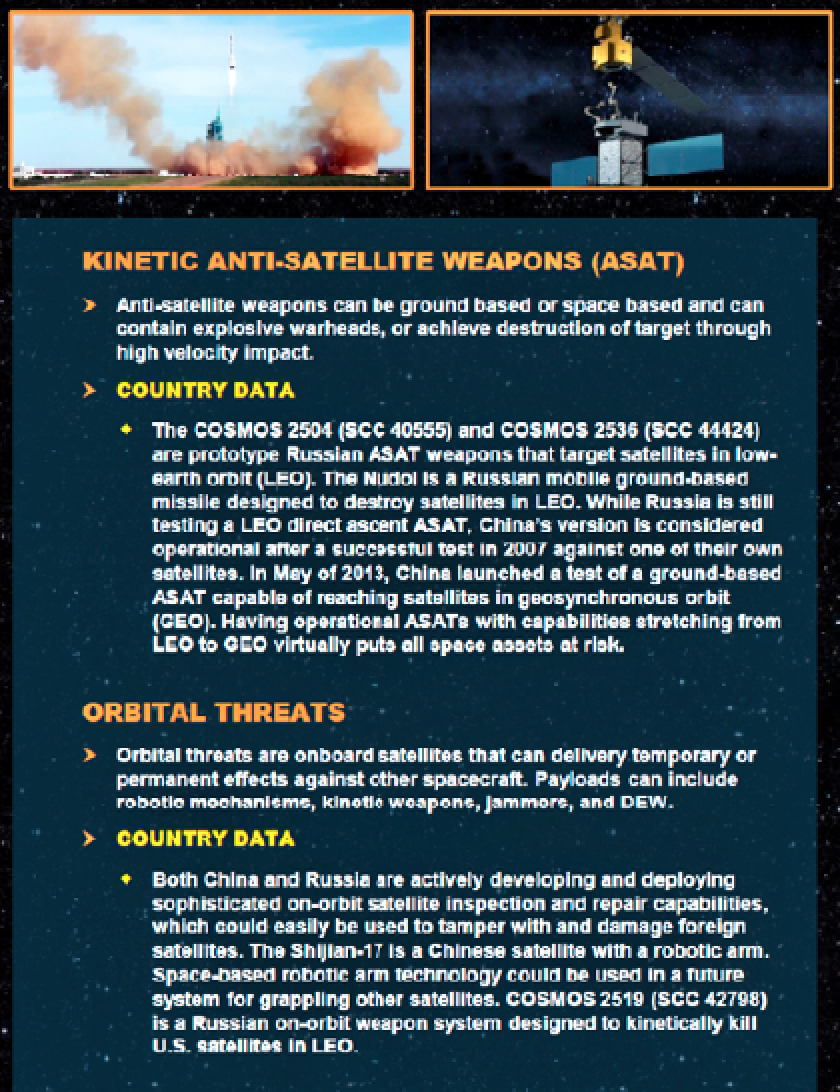 While pointing out China’s counter-space capabilities, CSIS also found that Russia is perhaps the most likely nation to conduct additional counter-space testing and deployment over the coming year.

In addition to testing a space-based weapon that appears to be capable of firing projectiles at other satellites, Russia also tested a co-orbital ASAT weapon in July 2020 that involved a set of “nesting” satellites in LEO that may have performed docking maneuvers. It also tested a direct-ascent anti-satellite weapon in December of 2020.

“These activities are not new and reflect a pattern of behavior in which Russia has continued to develop and reconstitute its counter space capabilities,” the CSIS found. While China and Russia were cited as posing the biggest challenges to the United States, CSIS also noted that Iran and North Korea also pose potential threats, mainly in the area of cyber.

“We need to know who is up there and what they’re doing. As new technologies such as space debris mitigation systems and robotic fuel trucks start to be launched, we must be positioned to make smart decisions around our high-value national security space assets including our missile warning satellites,” the General said.

Tianjin University in China has developed a robot with tentacle-like arms that could be placed onto a satellite and launched into orbit to remove space debris from popular orbits, according to the CSIS threat assessment.

“Attribution is critical when determining an appropriate response to an attack and can sometimes be hard to do in real-time,” said Dr. Lara Schmidt, principal director of Strategic Space Operations at The Aerospace Corporation. “For example,” Dr. Schmidt added, “understanding whether a system may be experiencing a cyberattack, let alone from whom, is difficult in real-time. On the other hand, some attacks can be observed before they affect a space system. For example, it is likely we would be able to detect the launch of a ground based ASAT missile using our existing missile warning capabilities. But it is no doubt a challenge to maintain space domain awareness and attack attribution by keeping track of everything that is happening above 100 km altitude and in the complex array of ground systems that support our space capabilities.”

Dr. Schmidt said the United States took an important step over the past few years just by changing the lexicon from “space situational awareness” to “space domain awareness. That may not sound too important, but I think it is key to shifting to a mindset that acknowledges that space is a warfighting domain and adopts some of the constructs used in other warfighting domains.

She continued,“The phrase ‘space situational awareness’ implied a limitation in scope; it was easy to infer that we only needed to know about ‘situations’ in which we were operating. Whereas ‘space domain awareness’ better captures the vastness of the problem. The U.S. needs to be able to understand not just our own ‘situations’ but also international activity in LEO and beyond. In fact, increasingly extending all the way to the cislunar region.”

Compounding the problem is that, while there are several space treaties, they represent a patchwork of nations and there isn’t any way to enforce them at present.

“We need to create norms of behavior in space.” General Thompson said. “Between the U.S., our allies and our adversaries, we need a dialog for what is normal and abnormal behavior. In the event of a threat, a common understanding is required of whether that threat is or is not about to accomplish a hostile act.”

“As is the case with most international treaties, it is difficult to obtain all the desired signatories,” Schmidt said. “But where we are today with space, the rapid pace of development of technologies and new ways to utilize space — spurred by both nation states and the commercial sector — makes it difficult to establish frameworks and attract signatories in a way that can stay ahead of this dynamic environment.

“For example, developments such as on-orbit satellite maintenance capabilities and debris-removal ‘tugs’ certainly have beneficial uses, but they might also be misapplied for nefarious purposes,” Schmidt said. “

Whether you go the route of treaties or rely on setting norms of behavior, either approach needs to account for the speed of innovation and ingenuity we are seeing in space technology today,” Dr. Schmidt concluded.