Meeting the communications needs of mobile users is a high priority for the U.S. military. The types and quantity of information passing over mobile communications links has grown rapidly and will likely continue to grow. Demand will further increase as irregular warfare will often drive fighting forces to operate in smaller, more mobile groups that are more widely dispersed. 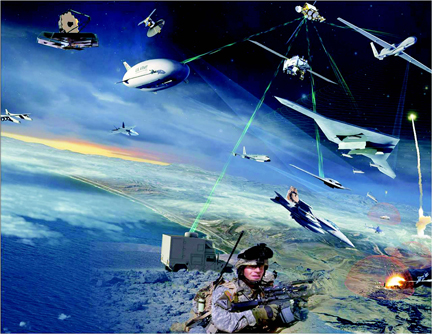 While there is little debate that servicing mobile users requires additional MILSATCOM in general, and protected MILSATCOM in particular, there are multiple approaches for achieving this goal.

Addressing those needs and threats means examining all parts of the MILSATCOM eco system—space-based satellite relays; a ground-based satellite control and mission planning capability; user terminals; interfaces to the communications commons like the Department of Defense’s Global Information Grid; and life cycle support and sustainment.

It’s the combination of these systems—terminals, space and mission control—that define the SATCOM capability.

The Need For MILSATCOM
Experience in combat teaches that connectivity is king. The growth has been huge, and has well outpaced predictions.

Government-owned SATCOM was unable to meet military demands in U.S. Central Command area of responsibility in the Middle East, but fortunately, the commercial SATCOM industry met most of the needs. That part of the world is on the under-served side of the digital divide; in Iraq, because before we sent troops in, we obliterated a relatively modern communications infrastructure. But in the case of Afghanistan, it really never existed.

The U.S. isn’t likely to see a much different equation as it rebalance forces to the Pacific. SATCOM may even be more critical to success in that region. Unlike Afghanistan and Iraq, there are potential adversaries in that part of the world that are not only willing but able to negate many of SATCOM capabilities that are not purpose-built to defend against threats. 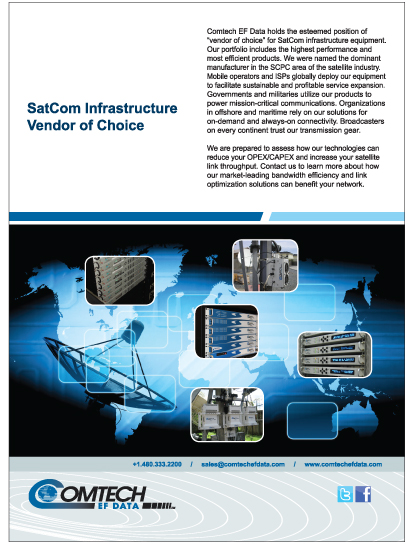 While the Department of Defense and its industry partners were able to focus available owned and leased commercial assets to provide a strong SATCOM network for operations in Afghanistan, it hasn’t been a perfect system. SATCOM support was definitely good at brigade headquarters and above, but pretty sketchy out at the pointy edge of the spear. To the extent SATCOM was available at all to the individual soldier or Marines in small unit operations, it was low-speed data or cell phone voice quality often shared among tens or hundreds of users.

More importantly, SATCOM was largely unprotected against modern-day threats. It was vulnerable to interference. Improper configuration of user terminals frequently brought down a satellite network because improperly configured satellite terminals are jammers, too. The networks relied on satellite hubs where physical damage or electrical power outage could bring down an entire network.

Threats To MILSATCOM
Many people are worried about the jamming threat. But a much easier and longer-lasting effect might be caused by a rocket launched into a SATCOM gateway, a cut cable between a remote terminal and command center, or a cyber attack on the networking gear behind the satellite terminal.

That’s why it’s important to focus on all the threats—not just jamming alone—and make a thoughtful determination on what threats to address in any SATCOM solution.

The communications network is only as strong as its weakest link. It doesn’t make sense to have a great anti-jam system if the ground infrastructure on which the network is dependent is an easy target to deny or degrade.

As military attention pivots from Afghanistan to potential adversaries in the Pacific, there’s no reason to pat ourselves on the back about the successes of SATCOM in Operation Enduring Freedom. Adversaries in the Pacific are different. They have different intentions, they have very high-technology capabilities, and they will want to degrade or eliminate our network-centric advantage very early in the game. Targeting the communications links will be a good start, particularly if they are easy targets. 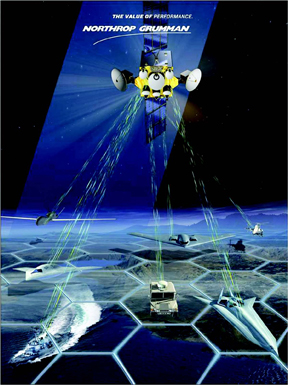 There’s a mix of SATCOM capabilities in place today. To be well-connected, users have to access all the satellites in view. They can link SATCOM together on the ground using network routers and other network hardware. But having to span several SATCOM links through space in a series results in a significant time delay that makes some communications applications unsatisfactory.

Voice and video teleconferencing—two significant uses of communications in the national security arena—for example, are pretty unsatisfactory when multiple satellite links (called hops) must be used. That’s only made worse when three of the four satellite capabilities will be out of service due to jamming or other attack.

All critical communications—those that are essential for mission accomplishment—should migrate to protected SATCOM whether the user is a sensor, a command and control node, or an air, maritime or ground shooter.

A mixed SATCOM system works well in a benign environment. But it is not necessarily efficient because multiple SATCOM links may be required to form a network. This means that:

– The service is more expensive and requires more ground equipment to “glue” it together
– Performance is reduced when multiple SATCOM links need to be connected end-to-end
– Users must deploy and bear the burden of operating and maintaining multiple satellite terminals to avoid those issues
– Most of the architecture offers little protection, and while there may be many satellite points of presence in view, tying them all together is complex
– While an individual link may not break the bank, having to use four links to get a job done is clearly more expensive than using one that does the whole job.

Protected SATCOM has been available for more than 30 years. The communication payloads that make it possible were purposefully designed and built to operate through government-specified threats from the low end of technology to the very highest level threats. Northrop Grumman has a “shelf full” of components that are flight-proven and known to mitigate the threat.

These components do a great job of meeting all requirements of the Advanced Extremely High Frequency protected SATCOM system, delivering strategic command and control at all levels of threat. Since the strategic threat exceeds that facing tactical forces, the AEHF system meets the needs of tactical operators as well.

To be sure, tactical troops use the preponderance of Milstar and AEHF capability in terms of capacity and connections. That said, as needs for tactical protected communications grow and needs for strategic communications stay about the same, the military should give more consideration to protected tactical SATCOM that may not have to incur all the features of a strategic system. 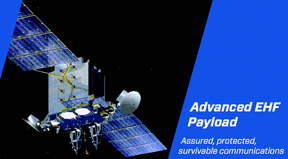 An Affordable Solution
This opens the possibility of using a nonstrategic satellite bus available from several U.S. manufacturers; a nonstrategic mission control and planning element; nonstrategic terminals; and commercial launch.

The ability to reconfigure AEHF components to meet other requirements is demonstrated in the Enhanced Polar System (EPS). EPS is a scaled-down version of the AEHF payload specifically designed to be hosted on satellites that provide coverage of the high latitudes. Users there don’t need a full AEHF capability. As the prime contractor for two EPS hosted payloads, Northrop Grumman scaled down AEHF digital and radio frequency assemblies and redesigned antennas to meet coverage needs in the high latitudes.

The same reuse and scaling of AEHF components can meet other needs as well. The company is proposing to build, for example, a protected tactical satellite using a commercial satellite bus, commercial launch, and the EPS Control and Planning Segment to augment AEHF with additional capacity and connections.

Once these satellites are in production, their price becomes very close to the price of equivalent unprotected SATCOM. The ground segment, furthermore, is much less complicated if AEHF crosslink assemblies are used to extend the on-orbit network coverage beyond the range of a single satellite. This gives a protected tactical satellite several advantages:

– It only needs a single U.S.-based ground station and a back-up because satellites that are out of view can be controlled via the crosslinks
– It doesn’t rely on overseas ground stations to manage the network and to present a lucrative target to adversaries
– Users don’t have to tolerate performance impacts of relaying communications over multiple satellite hops
– Together, this tactical satellite service is about the same price as an equivalent unprotected system

These components can be reconfigured in other ways, as well...

– It’s possible to build a smaller, strategic satellite on a smaller, strategic bus to eventually replenish the strategic AEHF capability as it reaches its end-of-life
– Another interesting configuration would be combining a tactical capability with something called the wideband relay. This would provide platforms like Global Hawk and Reaper with protected command and control links to their respective ground stations while relaying hundreds of megabits of mission data via pin-point uplinks that can be shaped to avoid interference threats.

The ability to deliver a protected system at prices close to unprotected can change the calculus of what communications the military protects. Rather than rationing out access to protected SATCOM, operators can allocate it to all users that could experience mission failure if their communications links are degraded, disrupted, denied or destroyed.

These options for future EHF capability are known as “evolutionary EHF” because there’s no need to invent anything new. Consequently, there would be very little non recurring engineering content, which can be hard to estimate and can impact cost and schedule.

This kind of modularity and ability can be used to craft a new capability from proven components without starting a new development. It allows military leaders to pursue a vision of a unified communications system where all core users can access a single system that is impervious to threats. These payloads can be placed in a variety of orbits that complicates an adversary’s ability to bring high-end threat of physical damage to all the platforms in view.

This doesn’t do away with other forms of SATCOM, but it does unify essential command, control and communications into a single, threat-proof system that makes it possible for any user—at any point on the globe—to connect with any other user, and via ground interconnection, to all users. If ground services should become impaired, essential communications will be maintained.

Air Force leaders have compared this situation with being at the proverbial fork in the road. In one direction, communications is a force multiplier that operates through anticipated threats. In the other direction, there is a great system of systems but it is vulnerable and may be degraded or denied by a tech-savvy adversary.

So the choice is clear: Satisfy known needs, or let a patchwork of decisions make it by default as each sensor, shooter and command and control capability is fielded. Military services are dependent on communications to tie the key actsors in the battlespace together. Leveraging decades of investments in protected SATCOM provides an affordable option well worth considering.

About the author
Rick Skinner is Business Development Director, Communication Systems, for Northrop Grumman Aerospace Systems, where he manages business capture initiatives for protected military satellite communications. He is a 29-year veteran of the U.S. Air Force, where he held senior level positions in communications and space systems policy, program oversight, operations, research and development and acquisition. In his last Air Force position, he served in the Office of the Assistant Secretary of Defense (Command, Control, Communications, and Intelligence), which was the principal Office of the Secretary of Defense staff assistant for the development, oversight and integration of Department of Defense policies and programs relating to the strategy of information superiority for DoD. Previous Air Force assignments included acting Mission Area Director, Space and Nuclear Deterrence at in the Office of the Assistant Secretary of the Air Force - Acquisition. After retiring from the Air Force, Skinner joined Lockheed Martin Space Systems, where he was Vice President, Strategy and Business Development for Global Communications, and prior to that, Vice President, Transformational Communications. 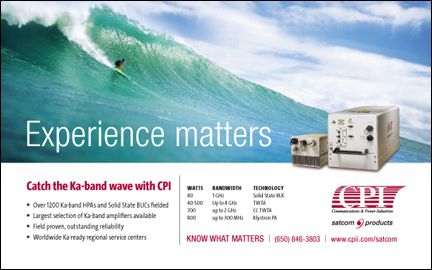