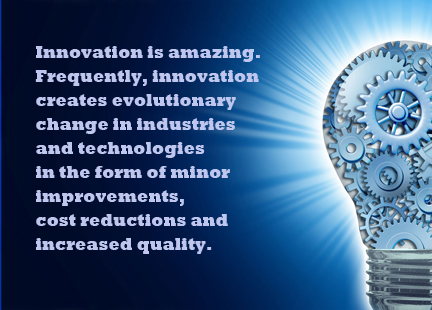 However, sometimes innovation creates real disruption in the form of revolutionary changes in technologies and business models. This is when innovation changes entire paradigms and turns conventional wisdom completely on its head.

I like to think of this kind of innovation as the “constant-to-variable” phenomenon. Meaning, that what we have always held as a constant suddenly becomes a variable. Interestingly, this is precisely why we are all geniuses at age 18, and realize we don’t know anything at age 40.

For example, we’ve reached a point where satellite Earth terminals have maximized their potential in terms of gain and efficiency. You can only bend metal so many ways—at some point physics applies hard limits to incremental gains in optimization. Now a fascinating phenomenon is taking place. The thing that satellite Earth terminal engineers hold constant, the satellite, is, itself, changing.

Recently, several companies have either launched, or have announced a planned launch, of High Throughput Satellites (HTS). These new satellites are altering the standard equation engineers use to close links. Innovation such as this, when it changes what we hold constant (in this case, the throughput and capability of the cold, bent-pipe satellite) into a variable, changes industries forever. The technology changes, certainly, but so does the business model.

That’s what is truly exciting to me. Business models can always use a good shakeup every now and then. Without innovation, our industry could wind up like The Telephone Company in the 1980s—providing the same equipment and level of service as in the 1960s.

As I’ve always enjoyed working on the “bleeding edge” of technology in our industry, I’ve tried to keep pace with the most current innovations. After a fantastic Washington D.C. conference, I worked with the product team here at Coolfire Solutions to derive what we believe are the top five innovations in our industry for 2013.

MILSATCOM terminals. I was a systems integration engineer for 12 years and made a living on finding creative ways to cram more capability into an ever-shrinking envelope. Customers demand lighter, faster, less expensive and simpler. And integrators are delivering.

Harris, for example, has found a way to pack a 1.3m tri-band (X-, Ku-, Ka-) terminal into a single airline checkable case. The Seeker terminal comes with the RF electronics and a satellite modem, along with the manual point antenna, weighing less than 90lbs., and packs all into a 67-inch linear case that is (airline approved). Theter terminal is incredibly simple to set up and assembles extremely neatly. Returning the terminal into the case isn’t a jigsaw puzzle, either.

Tampa Microwave has possibly redefined the Microsat market with their technology. To me, these terminals are—hands-down—the simplest, most robust, and easiest to use VSATs in the market. They’re beautiful. Tampa Microwave has developed a technology where they can attach “slices” together. Each slice is either a modem or an RF package. This means they can modularly replace any RF module (changing frequency band or RF power output) or any modem module (swapping iDirect for a Radyne, for example). This modularity and simplicity are really the class of the Microsat industry.

L3, ND SatCom, and a few others have also come a long way in the miniaturization of their terminals—many others are just starting to catch on to this wave of terminal innovation.

#4: Wide Adoption Of Ka-Band
Back in 1985, when Ku-band was just starting to be adopted by global video distribution companies, many engineers wrote numerous white papers about how Ku-band would fail due to rain fade issues, a higher impact by scintillation and other atmospheric distortions, and linear polarization that would cause huge problems with the effectiveness of frequency re-use.

Sound familiar? It should, as a new generation of engineers are now saying the same thing about Ka-band.

Now, those engineers are, indeed, correct. Ka-band has a host of problems that include massive rain-fade issues. Ka-band is quite near the frequency of water absorption, which is about 22.7GHz. The high end of Ka-band receive is 21.2GHz. Rain can definitely have a significant impact on the quality and stability of a signal. Modem manufacturers have had to account for wild swings in power level to avoid continuous carrier unlocks, and network planners have to put in much higher margins to assure continuous communications when a cloud rolls by.

However, despite these issues, Ka-band brings too many benefits to ignore. First up? More frequency bandwidth. We’ve used up quite a bit of C-, X-, and Ku-band bandwidth already—terrestrial providers are chomping at the bit to take over most of C-band. Just having another frequency band in which commercial providers can operate is helpful.

Additionally, Ka-band beams are tighter, so satellites are able to steer smaller beams towards the surface of the Earth. This translates to the ability to aim several dozen beams at the Earth, but each beam reusing the same frequencies without interfering with one another. So frequency reuse on a massive scale is possible at Ka-band unlike in the lower bands.

Finally, passive gain is richer at higher frequencies, meaning reflectors can be smaller. This is part of what is driving the miniaturization of Earth terminals. Users can obtain more throughput for the same reflector size the higher the frequency. We all know that a synchronous 256Kbps circuit simply doesn’t cut it anymore.

#3: Smartphones in SATCOM
My favorite innovation in SATCOM is the introduction of smartphones. In 2009, when I purchased my first iPhone, I quickly realized that this device had every sensor and capability I needed to conduct a site survey and point an antenna—compass, inclinometer, declination map, GPS, and an intuitive user interface. By clipping the smartphone directly to a manual-point antenna and following a simple set of on-screen instructions, non-SATCOM trained people can now find and acquire a satellite.

The uses for smartphones go far beyond the installation and troubleshooting of terminals. Smartphones and tablet computers are fast becoming the primary user interface for computing and communications in our society. This means that more mobile devices are connecting with the bandwidth provided by satellite links.

It will not be uncommon to see integrated solutions delivered to customers that use smartphones to set up, align, troubleshoot terminals, and then turn right around and use that same smartphone or tablet to conduct the business of using the satellite bandwidth in user-specific applications.

I’m obviously a bit of a homer when it comes to mobile devices in SATCOM. Coolfire Solutions does some amazing things with smartphones. But one of the coolest things I’ve seen in a long time in our industry came from another company—Thuraya.

The SatSleeve, released this year, is, hands down, currently the coolest satellite terminal on the planet. This technology turns a regular iPhone 4 or 4S into a satellite phone that fits in the palm of your hand and weighs next to nothing. You can operate at speeds above 64Kbps anywhere within Thuraya’s global coverage areas.

You can now play Words With Friends from the top of Mount Everest, the middle of the Sahara, the Indian Ocean, or in the Australian Outback. I can’t wait to see what other innovations Coolfire, Thuraya, and hopefully a number of other companies will come up with nextas to what is that involve smartphone technology.

#2: Return of the Non-Geo Satellites
In 1999, when Iridium launched its 66-satellite network in Low-Earth-Orbit (LEO), they changed the way people thought about satellite communications. It was no longer necessary to deploy a large parabolic reflector to initiate a satellite phone call—the transceiver was small enough to fit into a cellphone-sized package.

Geosynchronous satellites are great in that they are, well, geo-synchronous... meaning that they don’t move much relative to someone standing on the ground. Satellites in other orbits, however, orbit the Earth either faster or slower than the Earth rotates. This means a terminal must track a satellite across the sky, and once that satellite sunsets (goes below the horizon), it has to go and locate another satellite to track across the sky.

This is why there are few communications satellites that operate in non-Geo orbits. However, over the past decade, auto-pointing and auto-tracking solutions for antennas has come a long way in terms of reliability, quality, and cost reduction. An auto-acquire terminal today costs about as much as manual-point terminal did 10 years ago. This makes auto-tracking satellite solutions financially viable again.

O3b Networks has bet their business model on this fact. They are launching eight Medium-Earth-Orbit (MEO) satellites this year. These satellites orbit the Earth four times a day and are 45-degrees apart from one another. This means as many as eight times a day (depending on the location of the user) the Earth terminal will switch to a new satellite.

Why would anyone want to put up with all of that tracking and switchover? Well, first of all, the satellites are Ka-band, meaning much higher throughput for smaller terminals. Second, the satellites are much, much closer to Earth, meaning latency is cut by about 75 percent of a standard geosynchronous link, resulting in improved synchronous user quality, especially for voice and video teleconferencing applications.

I’ve heard about other interesting business models involving non-geosynchronous satellite constellations, and I anxiously await with anticipation to see what ideas are coming inext I’m also excited to see how O3b fares once they launch their first satellites, which will occur in just a few weeks.

#1: High Throughput Satellites (HTS)
I gave this one away in the introduction—I firmly believe the biggest innovation taking place in our industry right now isn't coming from component manufacturers, terminal integrators, or even application providers—it's the recent influx of HTS. ViaSat. Hughes. Inmarsat. Eutelsat. Yahsat. Echostar. All of these companies have recently entered the HTS market with satellites that offer between 2x and 200x the available bandwidth on standard Fixed Service Satellite (FSS) satellites.

ViaSat - 1, launched in October of 2011, has more capacity (140Gbps) than all of the other satellites aimed at the United States combined. Talk about a game-changing innovation.

Northern Sky Research recently released a report that said that as much as 1.34Tbps of bandwidth will be supplied by HTS satellites by 2020. As many as 33 HTS satellites are expected to be launched between now and 2015. The satellite backhaul market can expect to triple in value from $800M to $2.3B by 2021.

The ground terminals, the business models, and all of the peripherals involved in satellite communications, have reached an incredibly high level of efficiency and capability, but everything depends on HTS satellites. The more powerful, the higher in capacity, and the more plentiful they are, the better for the industry.

The innovation happening among the satellite operators will flow down to massive disruptions in the global bandwidth game. Many companies in the satellite industry have been watching a continual shrinking of the pie, and in order to stay healthy, they've been playing zero-sum wargames with one another. With HTS satellites ruling the geosynchronous orbit soon enough, new business models that properly leverage these satellites will grow the pie and take share away from other backhaul solutions, both wired and wireless.

The Future Looks Bright
These are exciting times for the satellite industry. Change is the only constant, and things are changing more rapidly than ever before in the history of our industry.

The more we embrace innovation, the more satellites can compete with alternative communication capabilities. Those who create these disruptive innovations will enjoy the benefits of the disrupted business models of those who simply stand by and watch the developments.

The author, Tom Cox, is the President of Coolfire Solutions.