A United Launch Alliance Atlas V rocket carrying the second Mobile User Objective System (MUOS-2) satellite for the United States Navy lifted off from Space Launch Complex-41 at 9:00 a.m. EDT on July 19, 2013. This was ULA’s 6th launch of an aggressive 12 mission schedule for the year and the 72nd ULA mission since its formation in 2006. 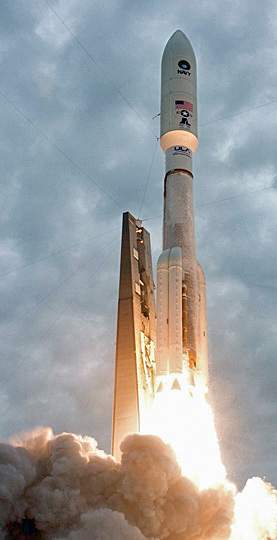 ULA’s statement regarding the launch said, “United Launch Alliance is honored to serve with our mission partners in the preparation and launch of this critical mission for the U.S. Navy and for our U.S. Air Force customer,” said Jim Sponnick, ULA vice president, Atlas and Delta Programs. “This joint government and industry team is keenly focused on mission success and enabling MUOS-2 to provide vital communications capability to the women and men protecting our freedom around the world.” The MUOS-2 mission was launched aboard an Atlas V Evolved Expendable Launch Vehicle (EELV) 551 configuration vehicle, which includes a 5.4-meter diameter RUAG Space payload fairing along with five Aerojet Rocketdyne solid rocket motors attached to the Atlas booster. The Atlas booster for this mission was powered by the RD AMROSS RD-180 engine and the Centaur upper stage was powered by a single Aerojet Rocketdyne RL10A engine.

“At nearly 15,000 pounds, MUOS-2 is the heaviest satellite launched to date by an Atlas launch vehicle, and today’s Atlas vehicle provided 2.5 million pounds of thrust during the boost phase,” said Sponnick.

Developed by the United States Air Force to assure access to space for Department of Defense and other government payloads, the EELV Program supports the full range of government mission requirements, while delivering on schedule and providing significant cost savings over the heritage launch systems.

Lockheed Martin, the satellite’s builder, stated that the second Mobile User Objective System (MUOS) satellite for the U.S. Navy is responding to commands after being launched today from Cape Canaveral Air Force Station, Florida. The Lockheed Martin-led initialization team is commanding the satellite from the Naval Satellite Operations Center located at the Naval Base Ventura County, Point Mugu, California. 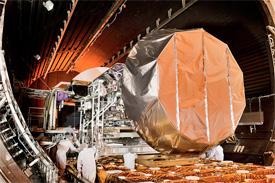 “MUOS is providing capability for mobile users that never existed before,” said Iris Bombelyn, Lockheed Martin’s vice president of Narrowband Communications. “We look forward to testing and delivering the second satellite of the MUOS constellation to our Navy customer. This on-orbit testing will prove the MUOS system capabilities and allow us to deliver the full suite of services available through the MUOS payloads, on MUOS-1 as well as MUOS-2.”

MUOS-2 launched at 9 a.m. EDT aboard a United Launch Alliance Atlas V rocket and will transition over the next nine days to reach its geosynchronous orbit location 22,000 miles above the earth. The solar arrays and antennas will then be deployed, and on-orbit testing will start for subsequent turn-over to the Navy for test and commissioning to service. 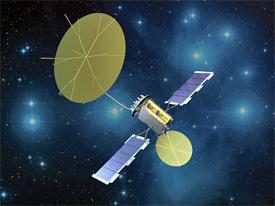 Artistic rendition of the MUOS-2 satellite. Courtesy of Lockheed Martin.

At the launch, Lockheed Martin hosted teachers from the National Science Teachers Association (NSTA) New Science Teacher Academy. The Lockheed Martin-NSTA fellows experienced how science can solve real-world challenges, helping teachers inspire and encourage student interest in science and math once they return to the classroom.

The first MUOS satellite, launched in 2012, has been providing high quality legacy voice communications for users, and terminals are already testing using the advanced payload that enables data exchanges. More than 20,000 existing terminals are compatible with and can access the MUOS legacy payload, and with the release of the new waveform developed for increased data-handling capacity, many of these terminals can be retrofitted to access the Wideband Code Division Multiple Access (WCDMA) payload.

This advanced WCDMA payload incorporates commercial technology designed to provide 16 times the number of accesses above requirements for the legacy UHF Follow-On system. The satellites also include a hosted legacy UHF payload that will be fully compatible with the current ultra-high frequency system and legacy terminals.

The geosynchronous constellation consists of four satellites and one on-orbit spare, which are expected to achieve full operational capability in 2015, extending UHF narrowband communications availability well past 2025.

Astrium has been selected by the European Space Agency (ESA) to supply the MicroWave Sounder (MWS) instruments for the MetOp Second Generation series of satellites (MetOp-SG). The contract for the MWS instruments, worth up to 155.5 million euros, has been awarded to Astrium in the UK and the satellites will be operated by EUMETSAT, the European Organisation for the Exploitation of Meteorological Satellites. 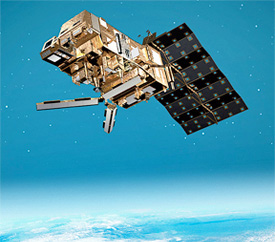 Artistic rendition of the MetOp-SG satellite.

The MWS instrument is the follow on to the highly successful MicroWave Humidity Sounder (MHS), also primed from Astrium in Portsmouth and currently flying on the first generation MetOp missions. The new generation of instruments will provide a much higher level of performance over a greater spectral range. The instrument delivers atmospheric temperature and water vapour information for use in Numerical Weather Prediction (NWP) forecasts enabling short term weather forecasts to be made with greater accuracy. 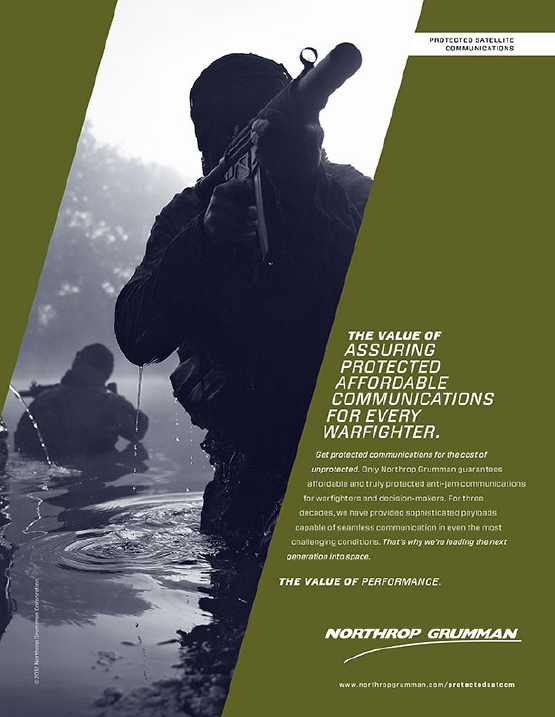 There will be a minimum of two MWS instruments, each with a mission life of 7.5 years. A team of 40 at Astrium in Portsmouth will develop the MWS instruments together with 15 major sub-contractors across UK and Europe. In the UK key contributions to the program will also be made by SEA Ltd., STFC/RAL, JCR Systems Ltd. and Queens University in Belfast together with other opportunities for UK companies to bid to provide equipment/services.

ESA has the option of ordering a third instrument, to ensure that the MWS instruments will provide accurate forecasting data until 2040 and beyond. The first MetOp SG satellite is due to be launched in 2021

Astrium UK Managing Director, Colin Paynter, said, “This contract is a direct result of the government increasing its ambition in space which has allowed our great innovation and engineering talent to have a route to market. It builds on Astrium’s proven expertise in meteorological and space-borne instruments, and is great news for the UK team. The unique experience built up in developing and manufacturing the microwave instruments for the current MetOp satellites firmly put Portsmouth as one of the world leaders in this area.”

Minister for Universities and Science David Willetts said, “This substantial contract shows that the UK’s increased investment in the European Space Agency is already paying dividends and getting us ahead in the global race and the space race. It confirms our space industry’s world-class position and will see Astrium working with other leading businesses, scientists and engineers to develop cutting edge satellite technology.” 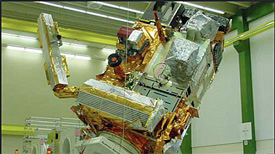 In addition to the MHS sounders in orbit on the current MetOp satellites, several other instruments were procured by Astrium and largely built at its sites across Europe. They include the Advanced Scatterometer (ASCAT), a radar system that measures wind speed and direction above the surface of the oceans, and the Global Navigation Satellite System Receiver for Atmospheric Sounding (GRAS), a GPS receiver that supplies atmospheric sounding data.

Artistic rendition of the Geo--IK-2 satellite.

RIA Novosti is now reporting that a wayward Russian military satellite completely burned up in the atmosphere and did not crash in northwestern China, contrary to previous reports, Russian space agency Roscosmos said on Tuesday.

Spokeswoman Anna Vedishcheva said the satellite, designed to help precisely locate military targets, had entered the atmosphere around 6:00 p.m. Moscow time the day before and then “ceased to exist,” having “burned up completely.”

Earlier media reports said the Geo-IK-2 satellite, which failed to respond to commands in early 2011 due to power loss and was located months later in a different orbit, crashed in China’s Qinghai Province.

The United States Marine Corps has awarded Harris Corporation (NYSE:HRS) a contract to replace its existing radio systems throughout Eastern Region U.S. Marine Corps bases and other locations. Harris received an initial $6 million order in the third quarter of the company’s fiscal year 2013 to design and deploy radio systems at four bases in North Carolina and Georgia. The full contract has a potential value of more than $16 million and includes system design and deployment, equipment, managed services, maintenance and other options.

Harris has more than 80 years of experience in public safety and professional communications and supports over 500 systems around the world.

U.S. Navy—Readiness Could Potentially Be Affected

As reported by Karen Parrish of the American Forces Press Service, budget cuts and spending restrictions are forcing defense leaders into measures that are “basically hollowing out the force through sequestration,” the commander of U.S. Pacific Command said. 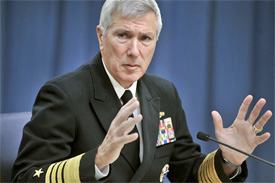 Defense Secretary Chuck Hagel’s letter sent to Congress on July 10th is “an accurate description of what’s happening to the force at-large,” Navy Adm. Samuel J. Locklear III told Pentagon reporters. Hagel’s letter outlined the department’s “plan B” for defense spending if sequester continues, which would mean a roughly $50 billion cut per year over a decade.

The secretary warned lawmakers this would necessitate a RIF, or involuntary reductions in force, for civilian employees and a severe slowdown to military modernization. Hagel’s worst-case scenario included an essential halt to recruitment, change-of-station moves and promotions.

Locklear said that before finalizing the approach he outlined in his letter, Hagel “did reach out, as always, to all the [geographic combatant commanders] to get our perspectives on what’s happening to readiness.”

The admiral added that as the letter describes, the driving forces that would make those measures necessary involve both “the money ... [and] the way that the money is being managed.”

The law protects much of the defense budget, he said, so funding cuts have to come mostly in operations and maintenance accounts, while leaders must also push resources to essential operations such as those in Afghanistan and Korea.

“What happens is that the services are then required to not overhaul ships, not fix airplanes [and] not do training at home,” Locklear said. “... So we’re basically hollowing out the force through sequestration.” The Navy and the military he joined 41 years ago were hollow, the admiral said. Hollowing out a high-performing military force, he told reporters, “... doesn’t take [more than] a year or two.”

Shrinking the force can be done, he said, but it must be managed efficiently to bring a high quality result. “And the sequestration is not allowing that to happen,” he said. Pacom cancelled several exercises this year alone because of the budget pressure, Locklear said. “

We maintain the main exercises with our allies, even though in some of those exercises we actually dialed down the amount of participation we had,” he said, adding most of the cancellations were of U.S.-only exercises.

“For today, if you ask the chief of the Air Force, he’ll tell you that about one-third of his airplanes and air crews back in the United States are not flying,” Locklear said. “The number of steaming days and flying hours that are allocated to me in the Pacific ... are being decremented. It just pushes the risk up for those service members who are potentially out there in harm’s way. And that’s going to exacerbate through ‘14 if the sequestration is not relieved.” 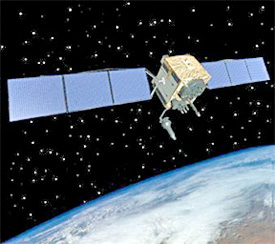 The Global Positioning System, which millions of people use every day for precise navigation and timing, recently became more accurate and reliable as the fourth Boeing GPS IIF satellite began operating in the U.S. Air Force network.

Launched May 15th, that satellite was handed over to the Air Force after 19 days of post-launch validation to stabilize the vehicle and activate the navigation payload, and set healthy on June 21st.

“With each IIF that we add to the network, the Air Force and Boeing give military and civilian users around the world better GPS navigation and timing information,” said Craig Cooning, Boeing vice president and general manager of Space & Intelligence Systems.

SVN-66, the official name of the new satellite, is now part of the active 31-satellite network. The next GPS IIF, the fifth of 12 planned, is slated for launch in October. The new satellite replaces an earlier Boeing-built model launched in 1996. 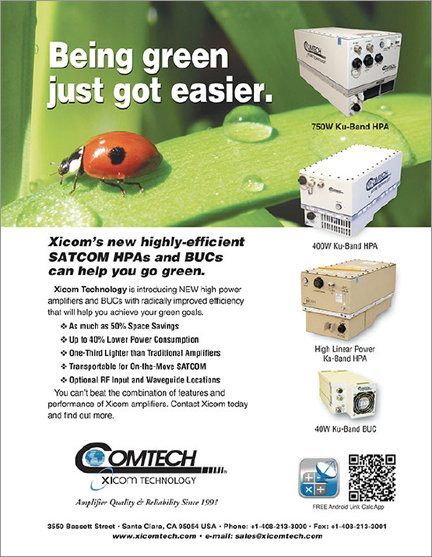