In 2012, the DoD will spend approximately $1 billion buying capacity on commercial communication satellites. That capacity will fulfill about 80 percent of the total satellite communication needs of the Department, the remainder being filled by government-owned satellites. This arrangement between the government and industry has evolved over time as the capacity needed to support a variety of bandwidth-hungry applications has exploded, and the capacity of government-owned systems has lagged. With the deployment of the government’s Wideband Global SATCOM constellation, the Defense Department will take a bite out of commercial demand, but the continual fielding of ever more demanding sensors and applications is likely to result in the need for a huge amount of commercial capacity for as far as one can see into the future.

Today, the DoD buys an increasing amount of commercial capacity directly from satellite owner-operators and the balance from resellers. About half of the total bandwidth is bought for end-users by the Defense Information Systems Agency (DISA), and most of the remainder is purchased on a variety of single-award or multiple-award “indefinite delivery indefinite quantity” (IDIQ) contracts.

The benefit of these IDIQ contracts is to streamline the buying process by preselecting one or more vendors who can then bid on task orders as they arise during the period of performance. Over the past two years, the Department has doubled down on this buying strategy by creating a very large, three-part IDIQ vehicle called the Future Commercial Satellite Communications (COMSATCOM) Services Acquisition or FCSA contract.

Under the co-management of DISA and the General Services Administration (GSA) the vehicle is designed to create more competition and reduce prices while also remaining responsive to user needs. While there is not yet enough data to determine the extent to which government objectives will be met with FCSA, it’s likely that cost savings will be achieved simply due to the fact that the government now buys bandwidth from the source rather than always having to go through resellers, a practice that was dictated by the old contract which FCSA replaced. Unfortunately for those who will continue to rely on commercial capacity for the foreseeable future, the story does not end here.

In order to see why, it’s necessary to understand a little bit about the companies that provide commercial bandwidth—here are some facts:

—First, there are only a few firms that do this sort of thing—the so-called owner-operators. In fact, there are only two global satellite companies followed by two significant regional players, and together they provide the majority of the total capacity on orbit on their combined fleets of almost 150 satellites.

—Second, these companies are predominantly providers of capacity for commercial customers such as the big media companies, large network operators, and direct-to-home television consumers. In fact, the U.S. Government, while an important customer of all four companies, probably consumes only about 15 percent of their total combined capacity.

—Third, owning and operating satellites is a capital-intensive business, with the cost of a single satellite on orbit (including the launch and the insurance) coming in at around $300 million. These facts create an important dynamic in the relationship between the DoD and the industry: the government is heavily reliant on the owner-operators to support their communication needs, but the owner-operators are less dependent on the government, having to pay even closer attention to their commercial customers who represent most of their business. Now consider a few more facts about the industry.

Commercial satellites generally operate for about 15 years once they reach orbit, and the primary metric for measuring their business success is return on investment. Said another way, the commercial owner-operators are in a capital intensive, long-cycle business—what they themselves call an “infrastructure” business. They plan decades ahead and spend billions of dollars on fixed assets. Financially, satellite owner-operators have more in common with railroads or commercial airlines than they do with typical government service providers—the kinds of companies that typically do business with the government through IDIQ contracts. Why is this a problem?

Challenging Situations
Under an IDIQ contract, the government first creates a framework for doing business with one or more vendors by establishing a period of performance, a general description of the work to be done, a contract ceiling and contract terms and conditions. Once they have done that and signed one or more of these umbrella contracts, they define specific requirements in the form of a task orders.

When buying commercial satellite capacity, the government almost always contracts for one year while reserving the right to unilaterally extend a year at a time for some number of option years, typically three to five. That arrangement would seem to be fine in that it usually results in quick turnarounds of task orders, and there are sometimes cost benefits as well, particularly when more than one satellite can meet the requirements.

However, when one looks a little deeper into this process, there is an obvious problem: There is no incentive for commercial owner-operators to invest in the capacity the government needs for the future. In other words, while IDIQ contracts such as FCSA appear to be providing some short-term benefits to the government, they are in fact also contributing to an escalating risk that future needs will not be met. In short, DoD is buying satellite capacity as if it were an easily scalable technical service, when what the Department is really buying is access to essential communications infrastructure. While we have not yet, as a nation, had to face the consequences of this practice, that time will come.

For the past decade, U.S. and Allied operating forces in Iraq and Afghanistan have consumed just about all the suitable commercial bandwidth available in the U.S. Central Command Area of Operations. Although it has been expensive and there is little available expansion capability in the region, most needs have been met by industry.

Fortunately for the government, during this time of great demand, the three largest owner-operators had many assets available with coverage of the Middle East, and to a somewhat lesser extent, Southwest Asia. However, earlier this year, the U.S. unveiled an updated national security strategy that envisions a more challenging Asia-Pacific security environment. The presence of the major operators in that part of the orbital arc is dramatically different than in the Middle East.

Although there are emerging commercial markets across Asia, access to spectrum for other than local operators is extremely limited; fill rates on existing satellites are very high; and regulatory barriers to entry are substantial across the entire region. In other words, it would be risky to assume that a crisis response in the Asia-Pacific could be supported by existing available commercial satellite capacity. While it’s possible to relocate commercial satellites to new locations, in the Asia-Pacific region, most of the space real estate is in the hands of local governments and companies. Orbital locations may or may not be available for use by commercial companies that support the DoD, and it will take years to address that issue.

Meeting Critical Needs
This takes us back to the key question of how both the short-term and long-term satellite communication needs of the DoD can best be met, and at an acceptable level of cost and risk. While IDIQ contracts certainly have a place in the overall acquisition architecture, we also need to understand their limitations: they will only work when there are alternative solutions on multiple satellites and more capacity than demand. Given the heavy reliance of our operating forces on commercial capacity to carry out their missions, are we willing to bet the farm on IDIQ contracts, gambling that there will always be excess capacity in the right place and suitable for the task?

Commercial owner-operators have been arguing for years that they need better visibility into the U.S. Government’s future needs as well as long-term commitments from them in order to justify investments on their behalf. It has been a somewhat sterile conversation because (1) the government has insisted that they cannot make commitments so far in advance, and (2) the companies have in fact made substantial investments even in the absence of such commitments.

Unfortunately, industry has not seen the promised results for the tens of millions of dollars they have spent on things such as DoD-specific security features they have been encouraged to build into their spacecraft, and that makes it increasingly unlikely they will invest in USG-specific capabilities in the future. As to the Government’s reluctance to collaborate with industry and make longer-term commitments, the time has come to be creative.

Large commercial customers who know they depend upon satellite capacity to deliver their products to market and support their essential operations routinely open their books and collaboratively plan with their infrastructure providers—and both sides benefit from this process.

The resulting arrangements often include things like long-term leases for a portion of a satellite payload, providing for assured access and the lowest possible prices. In some cases, commercial customers might even lease an entire satellite on a turn-key basis for most of the life of the asset. Even more important, these engagements lead to a better understanding of the customers’ long-term needs and help owner-operators justify the effort and expense associated with the development of both orbital locations and spacecraft.

Truly Essential
Commercial satellite capacity is an essential part of the national communications infrastructure and it is unnecessarily expensive as well as risky for the DoD to continue the current buying practices. While most in industry will happily continue to sell excess bandwidth at premium prices to the government, they are also willing to engage in mutually beneficial negotiations aimed to ensure their infrastructure investments take into account future likely USG needs. FCSA is better for the Government than what preceded it, but it is not the entire answer.

There have been some preliminary efforts by the DoD to come to grips with this dilemma, such as the Assured SATCOM Services in a Single Theater (ASSIST) initiative by DISA last year. While the idea did not survive the budgeting process the first time around, and while it did not adequately engage industry or Congress in its earliest stages, it represented an important expansion in the way the Government thinks about commercial satellite capacity.

As we face continuing budget pressures, and as we become ever more reliant on space-based communications, the time is right to completely rethink how the government and this unique industry segment conduct business.

Forward-thinking individuals in the Department of Defense are doing just that, and their efforts need to be encouraged and supported by the satellite industry, the end-users of commercial capacity, and the Congress.

Mr. Robert Tipton (Tip) Osterthaler joined SES in 2006 when he became the President and CEO of AMERICOM Government Services.  Since then, the wholly-owned subsidiary of SES SA has grown and integrated with other government focused elements within SES to become SES Government Solutions (SES-GS).  During his tenure at SES, the U.S. Government business has been transformed from a product oriented sales channel into a solutions-focused independent subsidiary responsible for all aspects of SES’s US Government business, including planning for the next generation of satellites that will be needed by government users. 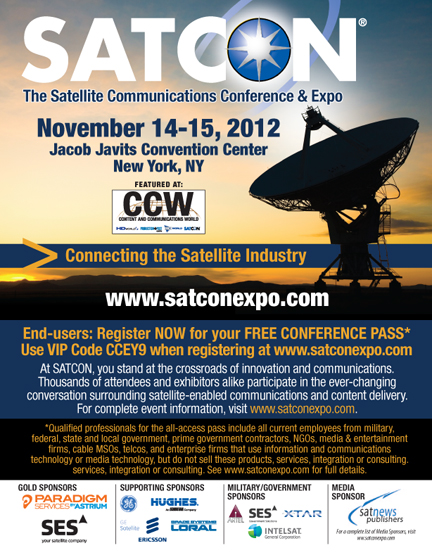