Today’s world is truly connected with a wide range of technologies that allow communication in homes and workplaces in cafes and airports and while we’re on the road. But demand for always-on connectivity goes way beyond the reach of terrestrial and cellular coverage, from special forces with a mandate to report mission-critical field imaging to passengers of ocean-going cruise ships who wanting to log on their favorite social networks. The expectation to be “online” at all times is truly global. 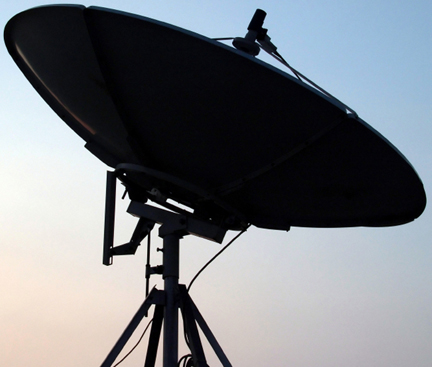 Satellite Orbits, Interference and the Need for Regulations
VSAT is a generic name for an entire class of two-way fixed or mobile solutions with a remote terminal that typically features a dish size between 30cm/12“ and 3m/118”. VSAT terminals communicate with geostationary satellites that orbit the earth at an altitude of 35,786 km (22,000 mi) over the equator. Communicating from earth to a single satellite at that distance is not in itself a major challenge, but doing it in a crowded sky is a another matter.

The proliferation of geostationary satellites has reached the point where less than two degrees can separate adjacent satellites. Transmission from earth must be focused precisely on the right spot or it could interfere with another satellite. Stricter regulations mandate that earth stations limit their transmission towards adjacent satellites by pointing exactly towards the target satellite and by testing the antenna emission patterns to ensure they do not contain any “side-lobes” emitting energy off center. This is an easy enough task from a large, fixed system but it can be difficult when transmitting from a compact, mobile platform.

Intense development, simulation and testing efforts are required in order to design and produce antennas that comply with today’s regulations. While this task in by no means easy, it becomes even more challenging when the antennas become smaller. This has led the industry to set de-facto standards for minimal antenna size. For example the norm for C-Band systems is to feature a dish of at least 2.4m/94”.

Bandwidth, Power, Costs and Efficiency
With the growing demand for bandwidth, the industry is in a continuous race to improve the efficiency of the limited satellite capacity to transmit more data over a given satellite radio capacity. This is the domain of companies like iDirect, Hughes, Gilat, Comtech, Viasat and others, who keep developing more efficient ways to translate bits in to radio signals and vice versa.

Transmitting higher bandwidth radio signals come hand-in-hand with higher transmission power which, as discussed above, is allowed if the beam is focused on the target satellite and the antenna emission patterns do not contain any “side lobes.” Reducing the size of the antenna will have an impact on the RF performance and as a result, in order to meet regulations, the system will be required to limit the power of transmission, and therefore their maximum usable bandwidth.

The easiest and most common way to use small antennas while preventing interference is to use “spread spectrum.” In other words, the transmission is spread over a much wider range of frequencies than that required by the data rate (typically 10 times the actual data bandwidth). This may be acceptable in military and homeland security applications, in which very small terminals can allow the transmission of critical information from the battlefield. However, in a world in which satellite bandwidth is as scarce as it is today, such inherently inefficient solutions bear exorbitant service costs and are often unacceptable in commercial applications.

VSAT Systems Get Smaller; Maintain Performance & Regulation Compliance
Maintaining high RF performance and fully meeting regulation while reducing the size of the VSAT terminal to a minimum can be challenging as the design has to find the optimal trade-off between size, weight, service cost, RF performance and maximal allowed bandwidth.

For example, in developing a new generation of stabilized maritime C-Band VSAT systems, one must maintain the advantages of the relatively large C-Band (global coverage, all-weather performance) while addressing the challenges that traditionally come with such systems. 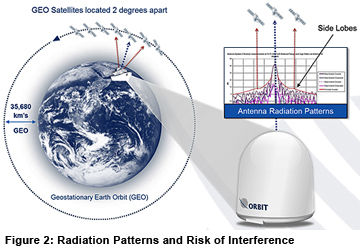 A typical maritime C-Band terminal features a 2.4m/94” dish and is hosted in a 3.8m/150” dome — due to its size, the system must be installed on site over several days and only fits large vessels. The challenge is to maintain RF performance while drastically reducing the deck space, and also to shorten the installation time.

Finding the right formula is a delicate balancing act between several interdependent factors: For example, going from the traditional prime focus antenna to a dual-offset design increases the RF efficiency and improves the radiation pattern. However, such an antenna demands a very special type of stabilized pedestal in order to provide seamless hemispherical coverage, which in turn demands that the stabilization and motion control algorithms allow for complex axis mapping.

Given the complexity of such projects, computer simulation software for antenna and mechanical design has been instrumental in making the development of high-performance compact VSAT solutions possible.

In conclusion, designing high-performance compact VSAT solutions is complex, but it has become even more complex with the growing importance of satellite utilization, efficiency, and compliance to regulation. Ultra-compact VSAT solutions with lower RF performance are important for special applications in which portability and footprint are necessary, but for the vast majority of defense and commercial applications in which cost and efficiency are required, smaller VSAT systems are expected to achieve the same standards as their larger siblings. 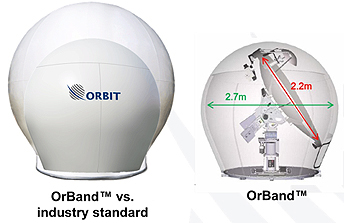 ORBIT VSAT Solutions
By using breakthrough RF design and original pedestal concepts ORBIT has created the OrBand™ - a revolutionarily compact C-band system which offers industry-standard RF performance (G/T and maximum EIRP/bandwidth) while taking 40% less deck space. The system features a 2.2m/87” dual-offset Gregorian antenna which, together with a high efficiency dome, complies with the strictest of industry regulations by satellite operators including Intelsat, Eutelsat and Anatel. With a compact 2.7m/106” footprint the system can now be installed in vessels with limited available deck space (from container ships to frigates) which until now could only host smaller systems incapable to provide true global coverage.

An additional example of system optimization is a VSAT solution designed for high-speed trains. Delivering broadband to trains moving at over 300km/h (186mph) required a VSAT system that could fit within the maximum allowed 50cm/20” clearance – sticking to a conventional approach would have resulted in a sub-par RF performance and high service costs. By taking an original approach, the low-profile the stabilized Ku-band OrTes AL-3602 system adds only 45cm/17” in height but hosts a large elliptical dish, increasing system gain and allowing it to meet Eutelsat regulation.